The anti-Mafia judge, Giovanni Falcone, received an iconic status during his outstanding career that ended on May 23, 1992, when he, along with his wife and three bodyguards, was killed by a bomb hidden on the highway leading to the airport of Palermo. It is alleged that criminal boss Toto Riina gave the assassination orders, in revenge for Falcone's success in bringing hundreds of mobsters to court in the maxi-trial ( maxiprocesso) that lasted between February 1986 and January 1992. In addition, Falcone had been one of forces behind the adoption of the first witness protection law of Italy (later amended), which remains to this day one of the most useful weapons against the Mafia, as hundreds of informers ( pentiti) agreed to testify in court against mafia bosses. Falcone's murder, and that of his fellow magistrate Paolo Borsellino two months later, led to the creation of the Direzione Investigativa Anti-Mafia (DIA).

One of the highlights of Falcone's career was convincing Tommaso Buscetta to come to Sicily from Brazil to testify at the Palermo Maxi Trial and later at the Pizza Connection Trial in the United States. Buscetta's testimony led to the convictions of more than 300 mafiosi and their associates.

In his speech on 6 May 2016, UNODC Chief Yuri Fedotov also acknowledged the great contribution of Judge Falcone to the fight against organized crime, "whose life and work have inspired and informed the means we still use to carry on his commitment. (…) And that is why it is no exaggeration to talk about the legacy of Giovanni Falcone when we talk about the UN Convention against Transnational Organized Crime, known as the Palermo Convention. He was among the first to recognize the need for an international treaty against transnational organized crime. In April 1992, Mr. Falcone was part of the Italian delegation to the very first meeting of the Commission on Crime Prevention and Criminal Justice, established by the General Assembly, which was 'alarmed by the high cost of crime…especially in its new and transnational forms.' Just one month after this inaugural session, Giovanni Falcone was killed at the hands of the mafia." (Yury Fedotov, UNOV Director General / UNODC Executive Director. Remarks on the Palermo Convention against transnational organized crime: the legacy of Giovanni Falcone. Vienna, 2016.)

On 19 June 2017, pursuant this United Nations General Assembly Resolution 71/209 the President of the General Assembly, in cooperation with UNODC and with the involvement of relevant stakeholders held a high-level debate to observe the twenty-fifth anniversary of the assassination of Judge Giovanni Falcone, focusing on the implementation of the United Nations Convention against Transnational Organized Crime (Palermo Convention) and the Protocols thereto and highlighting emerging trends and challenges in crime prevention and criminal justice and their impact on sustainable development. The opening of the day featured remarks by the President of the General Assembly, the Secretary-General, the Chair of the Commission on Crime Prevention and Criminal Justice, the Chair of the Conference of Parties of the Convention, and the Executive-Director of UNODC. There was also a brief ceremony in remembrance of Judge Falcone. Maria Falcone, Judge Falcone's sister and President of the Giovanni e Francesca Falcone Foundation, attended the ceremony. 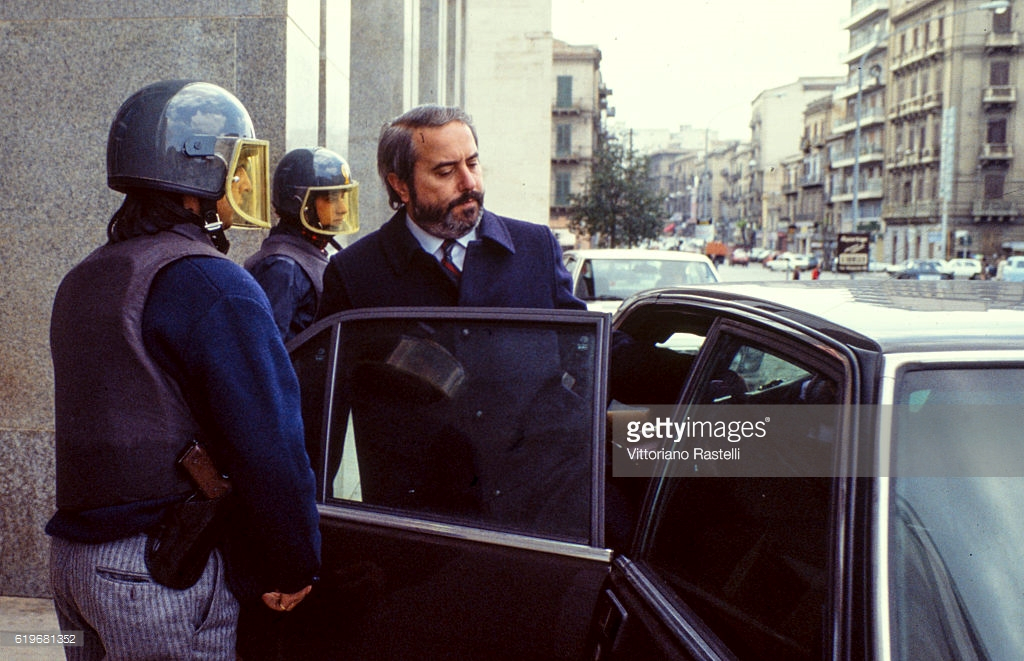 Description: The Italian judge Giovanni Falcone is escorted by police out of the Court of Palermo, Italy, on May 16, 1985. Source: Getty Images