4 April 2017- Experts from around the world met in Sao Paulo, Brazil, for three days to discuss methods for enhancing the capacity of international airports in the detection and interdiction of drug trafficking and other illicit activities in airport settings. During the three-day discussions, CRIMJUST attended the events and contributed to the discussions by delivering presentations and thematic inputs during working groups. 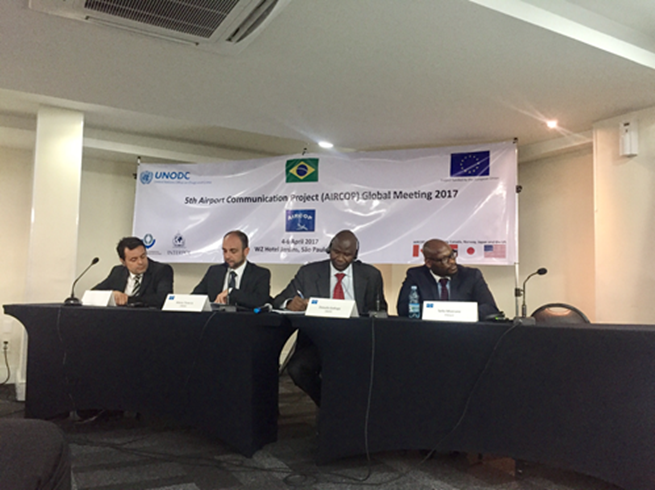 The 5th Global Meeting of the Airport Communication Project (AIRCOP), which covers 37 airports in 33 countries, was held in Sao Paulo, Brazil from 4 -7 April, 2017. It aimed at promoting experience and best practice sharing in the fight against illicit trafficking via air routes, and in strengthening airport controls. It was organized by UNODC with the support of the Federal Police of Brazil.

CRIMJUST gave a presentation on the handling of evidence and post-seizure investigations, under the broader theme of building strong cases through proper evidence collection by airport law enforcement officials. CRIMJUST highlighted the way that contact with suspects and seizures can provide unique opportunities to gather crucial evidence. Proper utilization of these opportunities can build stronger cases that will further strengthen the strong operational value of AIRCOP supported teams at airports. It also provided examples where investigating the modus operandi of one case further had led to multiple new seizures and arrests.

The presentation emphasized the need for more detailed post-seizure investigations and for facilitating secure and rapid exchange of information, in order to improve detection of drugs, suspicious passengers and other illicit activities. CRIMJUST also promoted regional cooperation at strategic and operational levels, and the need to focus on intelligence-led policing to enhance law enforcement capacity to process and generate operational intelligence. It advocated increasing the level of research and information sharing on "business models" of cocaine narco-groups.

The second presentation by CRIMJUST focused on the need for coherence and coordination at a trans-regional level, by building synergies with other partners and complementary initiatives. CRIMJUST reflected on the mandates and expected outcomes of the programme.  The presentation outlined the implementation status of CRIMJUST programme, with visuals to demonstrate the regional capacity building activities and workshops that CRIMJUST has held.

Particular emphasis was placed on building interregional cooperation and more holistic approaches to organized crime related threats, and specifically cocaine trafficking. CRIMJUST noted the importance of enhancing integrity and accountability of law enforcement and judiciary during their investigations and prosecutions. Finally, CRIMJUST looked at how it will continue to support AIRCOP in their work and bolster the efforts of other anti-drug trafficking initiatives. Particularly, it highlighted how CRIMJUST can work to ensure that investigations of seizures by AIRCOP supported teams are followed up at a prosecutorial level.

The meeting in Brazil promoted experience and best practice sharing in the fight against illicit trafficking via air routes, and in strengthening airport controls. Aside from CRIMJUST, engaging presentations were given by UNODC Regional Representatives, Brazilian Law Enforcement Officials and European Union.

AIRCOP, as an integral project under the EU Cocaine Route Programme, aims at preventing flows of illicit goods, and at detecting and enhanced screening of high-risk passengers at selected international airports. This is implemented through real-time exchange of operational information, as well as through the establishment, training and mentoring of inter-service Joint Airport Interdiction Task Forces (JAITFs).