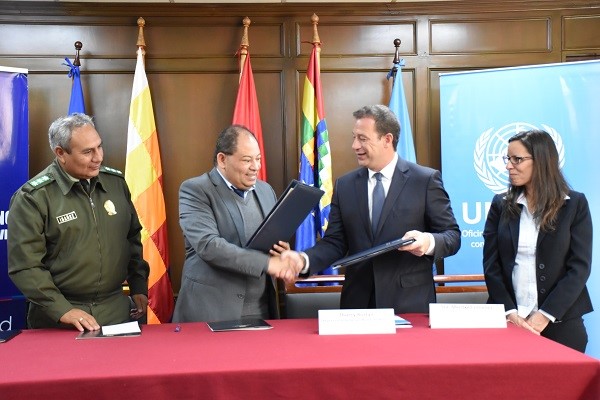 7 November 2018 -The Government of Bolivia and the United Nations Office on Drugs and Crime (UNODC) signed in La Paz, the letter of understanding for the Implementation of the CRIMJUST Project. Bolivia becomes, in this way, the eight-country in Latin America and the Caribbean to participate in the CRIMJUST project, joining the Dominican Republic, Panama, Argentina, Colombia, Brazil, Ecuador, and Peru.

The CRIMJUST project funded by the European Union and implemented by UNODC is within the framework of the European Union Cocaine Route Programme (CRP), the particularity of the project is that it provides a greater focus on criminal investigations and criminal justice in the countries of Latin America, the Caribbean and West Africa.

The project will facilitate cooperation and exchange of information among criminal justice agencies to achieve effective action in cases of transnational organized crime and drug trafficking, as well as help project countries, move forward in their response to organized crime. It also supports law enforcement authorities and judicial institutions in strengthening integrity, accountability, and resilience against corruption and the influence of organized crime.

The consolidation of law enforcement capabilities, the efficiency of the prosecution and institutional integrity are three essential elements for efficiency in order to fight against organized crime. The programmatic alignment of CRIMJUST will work in these three dimensions.

With the implementation of CRIMJUST in Bolivia, officers of the criminal justice system will be trained in post-seizure investigations, including the transition between the police and the prosecution; strengthen cooperation mechanisms at the national, regional and international levels, with special emphasis on interregional cooperation and anti-corruption measures.

Within the framework of this project a couple of days ago a cycle of three interlinked trainings was initiated to strengthen the implementation of Law Number 913 to fight against the illicit traffic of controlled substances in the areas of: (1) regional/ international cooperation (2) asset recovery and (3) payment of informants and many other activities planned in the future. 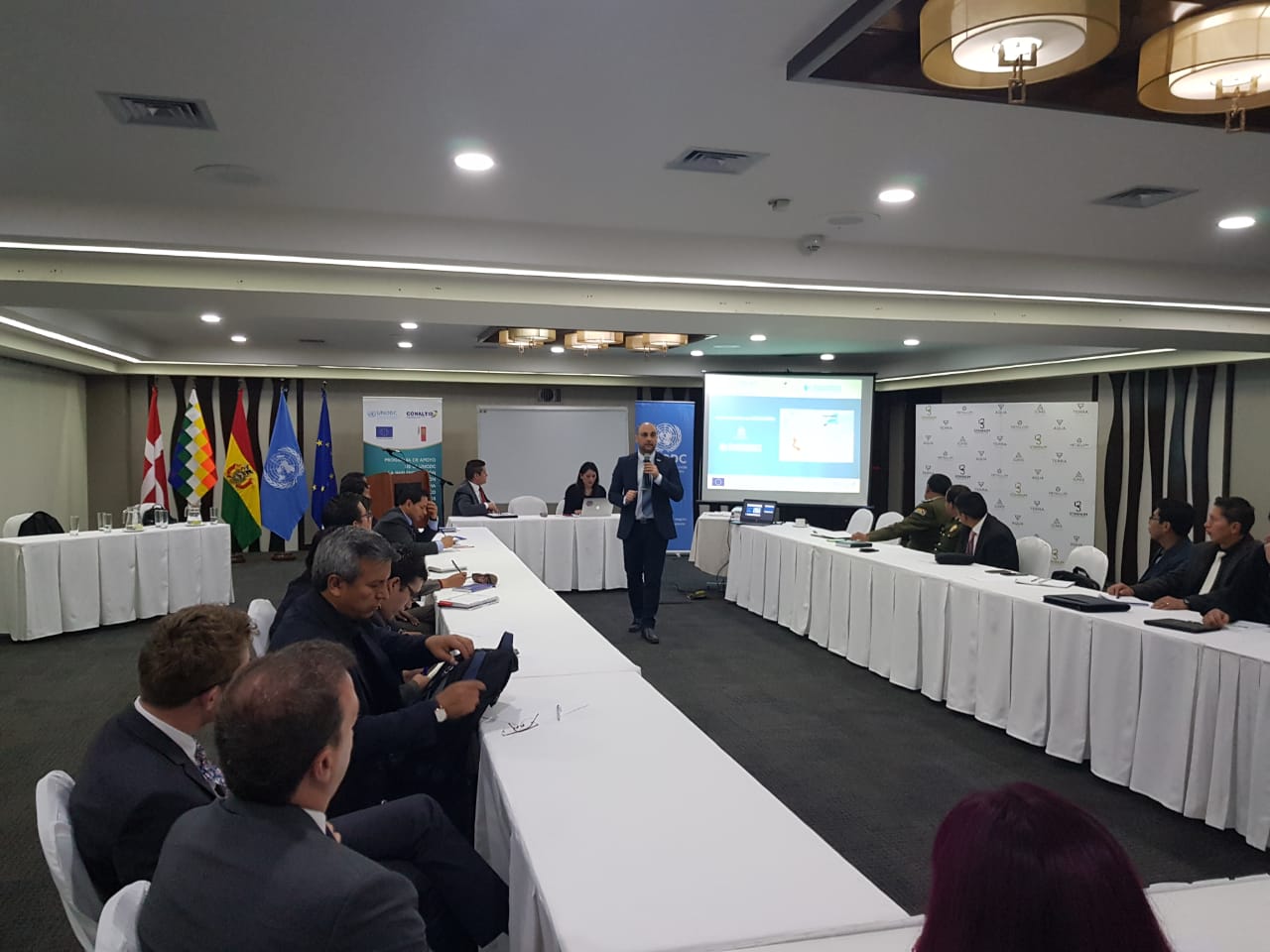 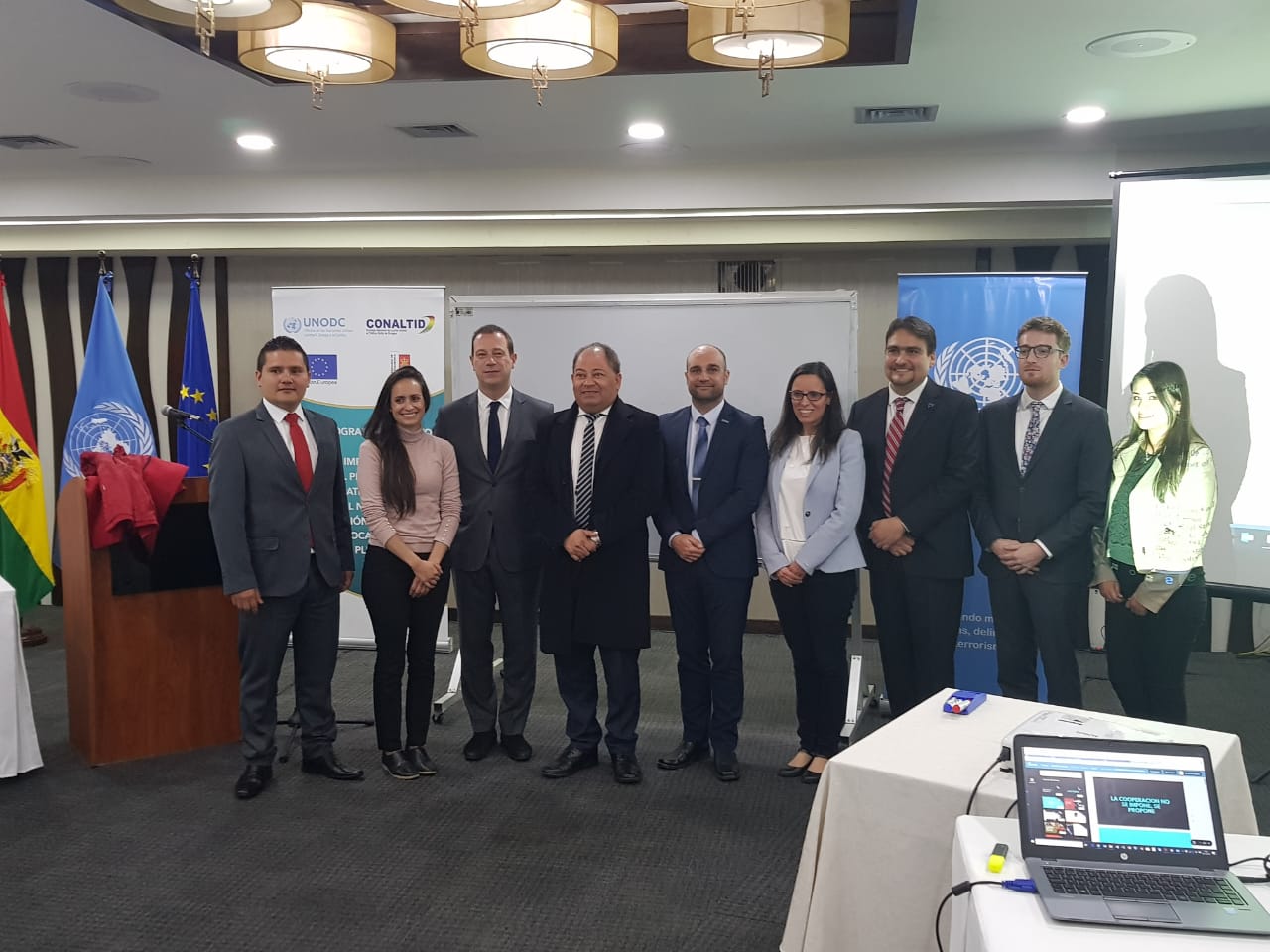 Under this context, Thierry Rostan, Representative of the UNODC Country Office in Bolivia, said that, as a result of the first workshop on international cooperation, participants have identified some activities that could be developed within the framework of the project, for example: organize an inter-agency work team between the relevant bodies of the executive body and the criminal justice system operators to develop a manual on international cooperation. Also within the framework of the project when investigators and prosecutors face an investigation with transnational links, CRIMJUST will support the criminal justice operators of Bolivia to travel to the other country involved and together strengthen the investigation. Similarly, he indicated that, within the framework of the project, the capacities, experiences and best practices of Bolivian professionals could be shared with other countries in the region.

The letter of understanding was signed by Mr. Carlos Romero Bonifaz, Minister of Government, and by Mr. Thierry Rostan, Representative of the UNODC Country Office in Bolivia, with the presence of the Deputy Cooperation Head of the Delegation of Bolivia. the European Union in Bolivia, Meritxell Jiménez and with the Head of the UNODC Global Programme CRIMJUST, Marco Teixeira. This event was held on Wednesday, November 7, at Hrs. 10:00, in the Green Room of the Ministry of Government, in the city of La Paz.