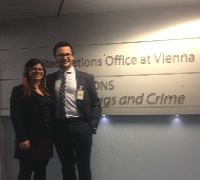 Organized by United Nations Information Service Vienna (UNIS Vienna), the UN Shadowing Programme offers young individuals the opportunity to accompany UN staff during their working day and to gain exciting insights into the international world of the Vienna International Centre (VIC). On 22 November two students, Ms. Viktoria Müllner and Mr. Tobias Birsak, both Austrian-natives and recent graduates with a background in international law, were received by the CRIMJUST team.

The CRIMJUST Programme Officer and the international consultant, Viktoriia Zharkova, outlined UNODC's mandate, as well as the project's core elements and recent achievements in enhancing law enforcement capabilities and strengthening the judiciary along the cocaine route.

Both participants of the Shadowing Programme were invited to a personal tour through UNODC's Drug Analysis Laboratory. Besides displaying a wide array of commonly used illicit substances, the tour allowed the young professionals to familiarize with high-tech equipment employed for the detection of narcotics and UNODC's field drug and precursor test kits used around the globe.

Throughout the day, the participants got in depth insight of the serious effects of cocaine trafficking on every section of the cocaine route, in particular countries in Latin America and the Caribbean, as well as in West Africa. Viktoriia Zharkova, CRIMJUST international consultant, emphasized that "CRIMJUST seeks to raise awareness and further sensitize young people for the ramifications evoked by illicit smuggling and related organized crime"

UNODC recognizes the involvement of young men and women in participatory decision-making and development processes as vital to achieving sustainable development and stability. Therefore, CRIMJUST actively supports the empowerment and the capacity development of young people. Matthias Kennert, Mercator Fellow currently affiliated with CRIMJUST, mentions "the responsibilities working at UNODC require a multidisciplinary skills-set, ranging from compiling research to administering the coordination of activities with partners. New, exciting challenges occur on a daily basis". Sofia Cordero, CRIMJUST intern, also highlights that "The internship at UNODC CRIMJUST has been an enriching professional experience that allows to gain practical work experience beyond academic achievements and provides deeper insights of the complexities surrounding organized crime".

Under that context, the participating students remarked the positive experience organized by UN Shadowing Programme and supported by UNODC. Mr. Tobias Birsak stated that "I had the honor of spending an exciting day with the dedicated CRIMJUST team. In presentations and personal conversations I learned a lot about UNODC and the team's work to combat cocaine trafficking in Latin America and West Africa. My personal highlight of the day was our visit to the UN's very own forensic laboratory." In the closing remarks of the day, Ms. Müllner stated that  "Overall the day offered more than I expected. I applied for the Shadowing Program' in the first place to look behind the scenes of an organization that had interested me for many years, so that I would get the opportunity to get to know the UN better. But it was much more than that- an experience that I wouldn´t have wanted to miss out".

Under the framework of the project CRIMJUST funded by the European Union 'Cocaine Route Programme , the UNODC and its partners (INTERPOL and Transparency International) aim to assist Member States to enhance their capacity and integrity of criminal justice institutions to detect, investigate, prosecute and adjudicate illicit cocaine trafficking cases, to foster cooperation at the interregional level for effective action to tackle drug trafficking and related organized crime.

The CRIMJUST team would like to thank Ms. Müllner and Mr. Birsak for participating and in the Shadowing Programme and UNODC's Division for Policy Analysis and Public Affairs for organizing this event.