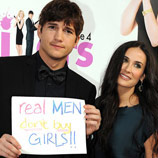 The Trust Fund is one of the most important elements of the new United Nations Global Plan of Action to Combat Trafficking in Persons, adopted by the General Assembly in July 2010. It will provide humanitarian, legal and financial aid to victims of human trafficking with the aim of increasing the number of victims who are rescued and supported, and broadening the extent of assistance they receive.

Ms. Moore and Mr. Kutcher have been strongly committed to the fight against human trafficking. They created "DNA", the Demi and Ashton Foundation, which aims to raise awareness about child sex slavery worldwide, change cultural stereotypes about the issue and rehabilitate victims. "Freedom is a basic human right and slavery is one of the greatest threats to that freedom," Mr. Kutcher said. "No one has the right to enslave another person," said Ms. Moore.

In a cruel irony, victims of human trafficking are very often treated as offenders rather than victims of a crime. Recognizing this, Mr. Ban says: "Many victims end up stranded, friendless, trapped in modern day slavery. They may not ask for help because they are isolated or cannot speak the local language. Or they may be seized by fear - fear that they will be treated as criminals even though they have been forced to engage in criminal acts".

Mr. Fedotov, whose Office will administer the Fund with the support of a Board of Trustees said, "We are honoured to have Demi and Ashton join us in launching the UN Trust Fund for Victims of Trafficking in Persons. We hope Demi and Ashton's extraordinary commitment to the plight of trafficking victims will move others to take similar action".

The United Nations has estimated that more than 2.4 million people are currently being exploited as victims of human trafficking. No country is immune. Human trafficking affects every country of the world, either as a country of origin, transit or destination. UNODC reports that victims from 127 countries undergo exploitation in at least 137 nations. Human trafficking takes many guises: forced or bonded labour; domestic servitude and forced marriage; organ removal; and the exploitation of children in begging, the sex trade and warfare.

"The Trust Fund will foster partnerships between Governments, the private sector, international organizations, NGOs and individuals so that they can work together to help victims of human trafficking, especially women and children", stressed the UNODC chief. "I am very proud that the United Nations Office on Drugs and Crime will serve as manager of the Trust Fund. UNODC has been working against human trafficking for many years, focusing on prevention of trafficking, prosecution of traffickers, protection of victims, and building partnerships to stop this shameful crime and to help its victims."

During the event, the first pledges to the Trust Fund were made by the Governments of Egypt, Luxembourg and Qatar, as well as by Naguib Sawiris, Executive Chairman of Orascom Telecom. Mr. Fedotov expressed his gratitude to these donors for taking the lead in making pledges.

UNODC has drawn attention to the plight of trafficked victims through the Global Initiative to Fight Human Trafficking ( UN.GIFT) and the Blue Heart Campaign.  The fund-raising slogan for the Trust Fund will be "Have a Heart for Victims of Human Trafficking" making a clear reference to the Blue Heart, which is rapidly becoming an international symbol against human trafficking and of solidarity with its victims.

UNODC invites all Governments, foundations, the private sector and even individuals to generously pledge contributions to the Trust Fund.

For information on how to pledge, please contact Ms. Simone Monasebian, Chief of the UNODC Liaison Office in New York (+1 (212) 963-5631; monasebian@un.org), or visit the Trust Fund page.

Speech of the Executive Director