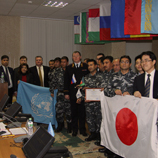 15 December 2014 -The last session of a series of trainings aimed at assisting the Afghan Counter Narcotics Police to tackle drug trafficking was concluded in recent days at the All-Russian Advanced Training Institute of the Ministry of Internal Affairs, commonly known as the Domodedovo Training Centre. The training was designed to improve the operational capacity of the Afghan Counter Narcotics Police in order to combat illicit drugs, and was provided under the framework of the UNODC Regional Programme for Afghanistan and Neighboring Countries.

At the training launch ceremony held earlier in December, UNODC Executive Director Yury Fedotov said that the Domodedovo project is an example of the spirit of shared responsibility to address Afghanistan's challenges. He commended Afghanistan, Japan and the Russian Federation for their commitment and their partnership with UNODC to improve the capacity of the Afghan National Police in tackling drug trafficking. "Promoting best practices and the exchange of relevant expertise at the regional level is increasingly important, especially in view of the post-2014 challenges Afghanistan is facing."

The training sessions, featuring an international curriculum, were delivered by leading experts from the Domodedovo Training Centre, the Russian Ministry of Internal Affairs, the Russian Federal Drug Control Service, the Russian Federal Customs Service, and the Collective Security Treaty Organization, with the participation of senior experts from the Narcotics Control Department, and the Ministry of Health, Labour and Welfare of Japan. This initiative strengthens the links between UNODC, Japan and Russia, while setting the stage for future expansion of their joint operations, particularly to support Afghanistan and Central Asia after the exit of the International Security Assistance Force in 2014. 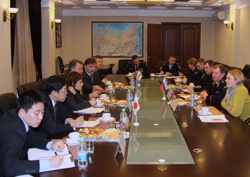 "This project is a meaningful cooperation effort in countering narcotics trafficking in Afghanistan to which Japan and Russia attach the utmost importance. Japan is committed to continue the cooperation with Russia in this field," said Ken Ono, Counsellor at the Embassy of Japan to the Russian Federation. For his part, the head of the Domodedovo Training Center, General Yury Demidov, welcomed the joint initiative, highlighting the applied skills and comprehensive training curriculum which integrates international standards for combating organized crime.

In parallel with this last training session, the Organization for Security and Cooperation in Europe (OSCE) carried out an additional session for the Afghan Counter Narcotics Police. This group of trainees benefited from the Japanese expertise in the field, and shared best practices with the UNODC-assisted group.