11 December 2015 - A joint cooperation framework between UNODC, Japan and Russia aimed at supporting Afghanistan and Central Asian countries to tackle drug trafficking entered its second phase in recent days. To mark this milestone, the first in a series of specialized trainings given to the Afghan Counter Narcotics Police was recently held at the All-Russia Advanced Training Institute of the Ministry of the Interior, commonly known as the Domodedovo Training Centre. The training is designed to improve the operational capacity of the Afghan Counter Narcotics Police in order to combat illicit drugs, and is provided under the framework of the UNODC Regional Programme for Afghanistan and Neighbouring Countries.

The launch ceremony of Phase II was held in Vienna today, where UNODC Executive Director, Yury Fedotov, emphasized how the training provided at the Domodedovo Centre is helping to strengthen the capacities of the Afghan law enforcement officers tasked with countering illicit drug trafficking. "Our project remains a strong example of the spirit of shared responsibility that we need in order to address the challenges posed by illicit drugs and organized crime," Mr. Fedotov said. "I am also pleased to note that four women trainees from the Afghan police took part in the first training of this phase, held at the end of November. Another highlight in the second phase of our cooperation is the expansion of the training to include the five countries of Central Asia - Kazakhstan, the Kyrgyz Republic, Tajikistan, Turkmenistan and Uzbekistan - which will contribute to strengthening regional cooperation and border control." 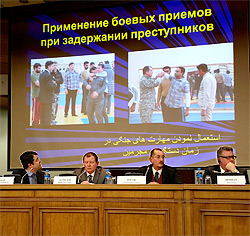 The Domodedovo cooperation project responds to the call in United Nations Security Council resolution 2210 to support Afghan efforts to address drug production and trafficking in a balanced and integrated approach, including through regional initiatives. The training sessions, featuring an international curriculum, are delivered by leading experts from the Domodedovo Training Centre, the Russian Ministry of the Interior, the Russian Federal Drug Control Service, the Russian Federal Customs Service, and the Collective Security Treaty Organization, with the participation of senior experts from the Narcotics Control Department and the Ministry of Health, Labour and Welfare of Japan. This initiative strengthens the links between UNODC, Japan and Russia, in the context of the expansion of their joint operations, particularly to support Afghanistan and Central Asia after the exit of the International Security Assistance Force in 2014.

Alexander Savenkov, Deputy Minister of Interior of the Russian Federation, emphasized the close coordination between his Office and UNODC in providing theoretical knowledge and practical skills for law enforcement officials in their work against drugs and crime at the Domodedovo centre. He further explained that the training, carried out as close to real situations as possible, is aided by innovative pedagogical and technological tools, together with field visits to police facilities, courts, and other law enforcement entities in Moscow and its surroundings.

At the launch, Mr Savenkov also highlighted the role of both UNODC and the Japanese experts in the implementation of this program, and further expressed his readiness to strengthen cooperation between the Russian Ministry of the Interior and UNODC in all spheres of law enforcement issues going forward.

For his part, the Permanent Representative of Japan to the United Nations in Vienna, Mitsuru Kitano, said that the Domodedovo project has achieved notable results, such as delivering five full sessions so far, and having more than 80 law enforcement officers trained. "Taking advantage of the lessons learned and the results obtained, we decided to extend the project to Kazakhstan, the Kyrgyz Republic, Tajikistan, Turkmenistan and Uzbekistan," he added.