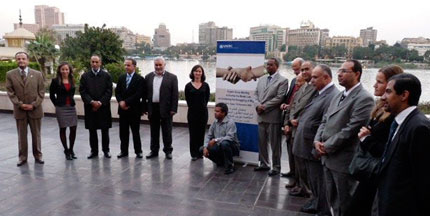 Cairo, Egypt - From 7 to 9 December 2009, several judges and prosecutors from countries of North Africa met in Cairo, Egypt, to review a Model Law on combating the smuggling of migrants which was drafted as a result of the two Expert Group Meetings that were held in Vienna in March and October 2009. The meeting was hosted by the UNODC Regional Office for the Middle East and North Africa, and was made possible through funding received from the European Union.

The meeting hosted experts from Egypt, Libya, Morocco, Tunisia, Sudan as well as Yemen and Kuwait, who took part in exchanging views in reviewing the Model Law.

The primary goal of UNODC with respect to combating the smuggling of migrants is to promote global adherence to the Migrant Smuggling Protocol and to assist States in their efforts to effectively implement it. As Article 2 outlines, " the purpose of this Protocol is to prevent and combat the smuggling of migrants as well as to promote cooperation among State Parties to that end, while protecting the rights of smuggled migrants." In this regard, the Expert Group Meeting aimed at reviewing a model law against the smuggling of migrants that will be applicable to countries of all legal traditions. The finalized document will serve as a tool to assist Member States in the implementation of the United Nations Protocol against the Smuggling of Migrants by Land, Sea and Air supplementing the United Nations Convention against Transnational Organized Crime.