"Time and again, Ghanaians have chosen constitutional rule over autocracy, and shown a democratic spirit that allows the energy of your people to break through. ...We see that... in courageous journalists like Anas Aremeyaw Anas, who risked his life to report the truth. We see it in police like Patience Quaye, who helped prosecute the first human trafficker in Ghana..."

In his remarks to the Ghanaian Parliament on 11 July 2009, United States President Barack Obama praised Ms. Patience Quaye for her role in the successful resolution of a human trafficking case in Ghana.

On Monday 22 June a court in Accra sentenced three Chinese traffickers, James Xu Jin, Chou Xiou Ving and Sam Shan Zifan, to a total of 41 years in prison. The traffickers  recruited women from China - sometimes from their own communities - by offering them work in a restaurant in Ghana. Upon their arrival in Ghana, the recruited women discovered that no such restaurant existed. Their travel documents were taken from them and they were forced into sexual exploitation.

The work of investigative journalist Anas Aremeyaw Anas resulted in the criminal investigation and subsequent arrests of the traffickers by the Ghana Anti-Trafficking Unit within the Criminal Investigations Department, led by Ms. Patience Quaye. Prior to this success, Ms. Quaye was involved in the prosecution and conviction of another human trafficker, for which she cooperated with Nigerian authorities to gain extradition of the trafficker and worked towards securing the protection and assistance of two of his victims.

Ms. Quaye had been an active participant in a UNODC train-the-trainer programme and other activities implemented to enhance proactive criminal justice response against human trafficking in Ghana.  The anti-human trafficking activities carried out by UNODC in Ghana (funded by Canada, France and the United States of America) and other West African countries have focused on building capacities with respect to proactive investigation, victim and witness protection, prosecution, awareness-raising and prevention of human trafficking, and fostering international cooperation.

In his remarks to the Ghanaian Parliament, President Obama highlighted the need for "capable, reliable and transparent institutions" that offer people strong parliaments, honest police forces and independent judges. In stressing these key imperatives, President Obama reiterated the United States' commitment to increasing assistance for "responsible individuals and institutions, with a focus on supporting good governance."  UNODC does likewise with respect to the criminal justice institutions of Ghana.

The work of the Ghana Anti-Human Trafficking Unit is a landmark achievement for criminal justice respondents in Ghana. This intelligence-led investigation, which has led to the arrest and subsequent prosecution of members of an organized and international human trafficking ring, stands as a promising example to criminal justice actors not only in West Africa, but in other parts of the world too. The exemplary work of the Anti-Human Trafficking Unit and National Task Force in general also underscores the need for and value of the technical assistance delivered by UNODC - such as that received by Ms. Quaye - to strengthen the capacity of criminal justice practitioners to combat human trafficking in West Africa, and to protect the victims of such trafficking. 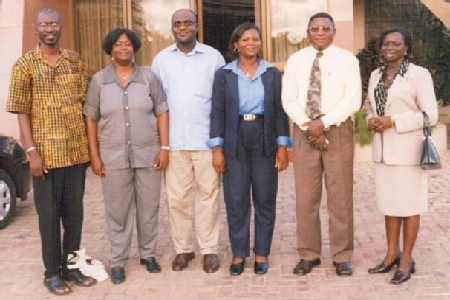