The Impact Programme aims to assist African states in strengthening their criminal justice response to migrant smuggling, and currently consists of three regional projects that cover North and West Africa. 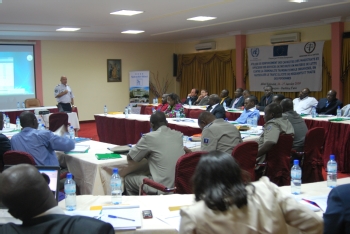 In the framework of the Impact Programme UNODC in cooperation Europol, INTERPOL and SOCA elaborated a Basic Training Manual on Investigating and Prosecuting Migrant Smuggling. Between December 2008 and June 2009, three working meetings were organized in Senegal, Egypt and Nigeria respectively involving investigators and prosecutors from 30 countries, representing both common and civil law countries from Europe, Africa, North America and the Pacific region.

In short, the Training Manual covers the following thematic areas:

Based upon this training manual, UNODC in cooperation with the Ministries of Justice of Burkina Faso and Côte d'Ivoire, OCRIEST - the French law enforcement body responsible for investigating migrant smuggling - and JIRS - the French prosecutorial body specialized in fighting organized crime - delivered a two-day training course on migrant smuggling for 65 magistrates and law enforcers from Benin, Burkina Faso, Mali, Mauritania, Niger, Senegal and Togo. This training was the third of a series of trainings for investigators and prosecutors that will be implemented under the Impact Programme both on a national and regional level in North and West Africa over a period of 12 months.

This training was made possible through funding received from the European Union and the Government of Spain.

Read more about the Impact Programme.