Side Event on Trafficking for Forced Labour and Labour Exploitation 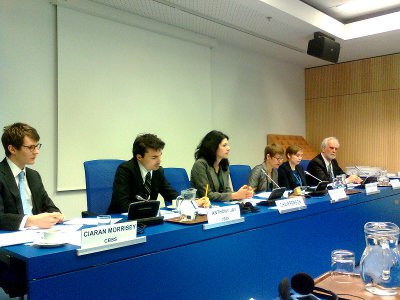 The side event focused on trafficking in persons for forced labour and forced labour exploitation. The panel, chaired by UNODC, was composed of representatives from HEUNI, the Council of the Baltic Sea States Task Force against Trafficking in Human Beings (CBSS-TF-THB) and the International Centre for Criminal Law Reform and Criminal Justice Policy (ICCLR).

Natalia Ollus and Anniina Jokinen of HEUNI presented the study takes a comprehensive look at trafficking for forced labour in Finland, Poland and Estonia and covers the period 2004-2010..

The research uncovers situations of exploitation in the agriculture, shipyards, construction, restaurant and service sectors, as well as in commerce, seasonal jobs and in domestic work. Victims are exploited in many different ways. The victims are usually paid very low salaries without any mandatory compensations or extras, or they receive no salary at all. Victims find themselves under constant supervision and control and they are very dependent on their employer. They often work long hours 6-7 days a week. Victims may have written work contracts in languages they do not understand. The workers' freedom of movement is limited and their passports are taken away. Victims are isolated from the surrounding society and remain unaware of their own rights and the terms of employment that are acceptable in the destination country.

Problems regarding the identification of victims and cases as well as the provision of victim assistance are similar in all three countries. The researchers conclude that practitioners should be educated about the elements which constitute trafficking for forced labour so that they can identify potential victims and cases and provide appropriate assistance to the victims.

The study was carried out with the support of the Prevention of and Fight against Crime Programme of the Directorate-General Justice, Freedom and Security of the European Commission.

Mr. Yvon Dandurand from the International Centre for Criminal Law Reform and Criminal Justice Policy (Vancouver) presented outcomes of a national consultation on the progress achieved to date in preventing human trafficking and potential plans for the future in Canada. The procedure included consultations at the provincial and national levels, as well as a meeting of international experts. The main purpose of the consultation was to identify some of the lessons learned thus far and delineate the elements of a renewed human trafficking prevention strategy for Canada. The International Centre for Criminal Law Reform will post a more detailed account of this planning exercise on its website.