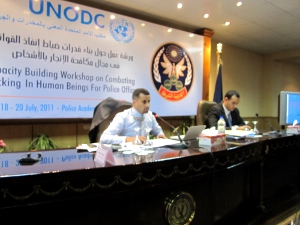 In the framework of the project on "Strengthening the criminal justice capacity to disrupt key human trafficking routes in Egypt, Pakistan and Kyrgyzstan", a training workshop for 30 Egyptian police officers was held by the UNODC Regional Office for the Middle East and North Africa in cooperation with the Ministry of Interior. The meeting took place at the Police Academy in Cairo, Egypt from 18 to 20 July 2011. The training workshop was based on the modules of the UNODC Anti-Human Trafficking Manual for Criminal Justice Practitioners and aimed at strengthening the capacity of police officers both as first responders to human trafficking and as investigators of trafficking in persons cases.

In his opening statement, General Essam El-Bediewy of the Ministry of Interior emphasized the commitment of Egypt to fight human trafficking and summarised the legal and policy developments in this regard, in particular the adoption of law no. 64 of 2010 on combating human trafficking. Mr. Ihab Minabbawy, representing the UNODC Regional Office for the Middle East and North Africa, underlined that UNODC stands ready to assist and strength its cooperation with Egypt in the fight against trafficking in persons. In his closing remarks, Lieutenant Colonel Essam El-Gamal of the Ministry of the Interior, thanked UNODC, the trainers and the participants for the successful training workshop and welcomed further collaboration.

The training included the viewing of the UNODC training film "Affected for Life", a session on the Egyptian legislation to combat trafficking in persons and on the National Action Plan 2011-2013. The training delivered covered modules 1-12 of the UNODC Anti-Human Trafficking Manual for Criminal Justice Practitioners. An introduction to the Victim Assistance Translation Tool and the First Aid Kit for use by Law Enforcement Responders in addressing Human Trafficking was given. A multidisciplinary team of trainers was gathered by UNODC to deliver the workshop. The team was composed of the Head of the Lithuanian Anti-Trafficking Police Unit, an Egyptian judge, a representative of a non-governmental organisation, and in-house experts.

The workshop was held in the framework of the project on "Strengthening the criminal justice capacity to disrupt key human trafficking routes in Egypt, Pakistan and Kyrgyzstan", funded by the United Nations Development Account. The main objective of this project is to strengthen the capacity of the national criminal justice systems in three selected countries to investigate, prosecute and convict human traffickers. The training workshops for police and law enforcement agencies focus on capacity-building to identify victims of trafficking in persons and investigate the crime in order to establish a more effective criminal justice response that protects victims and prosecutes offenders.