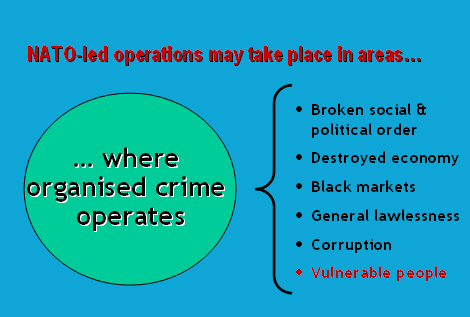 In 2004, the North Atlantic Treaty Organization (NATO) adopted a zero-tolerance policy on trafficking in persons. The NATO policy calls for military and civilian personnel and contractors taking part in NATO-led operations to receive appropriate training on standards of their behavior during the operations. The zero-policy also aims to actively combat trafficking in persons, recognizing the cause and effect linkages between the phenomenon, corruption and organized crime.

The United Nations Office on Drugs and Crime (UNODC) is the guardian of the UN Convention against Transnational Organized Crime (UNTOC), and the Protocols thereto. In this regard, UNODC in cooperation with NATO and the NATO School supports the implementation in practice of the Trafficking in Persons and Smuggling of Migrants Protocols.

Through the NATO School Oberammergau (NSO), NATO conducts education and individual training in support of current and developing NATO operations, strategy, policy, doctrine and procedures. The NATO School provides a course on European Security Cooperation twice a year. Since 2004, UNODC staff provide training on trafficking in persons and smuggling of migrants and their impact on security in the framework of NATO operations. The most recent training by UNODC was conducted on 15 February 2011. 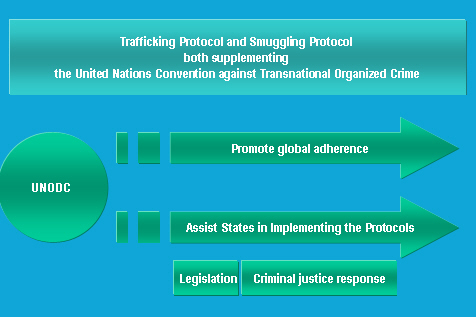 The presentation by UNODC aims to provide NATO Staff and affiliates with an understanding of the smuggling of migrants and trafficking in persons related crimes, and how these impact the countries where NATO-led operations take place. The presentation also gives an overview of the tasks and skills required by law enforcement officials to tackle these crimes and ensure that victims of trafficking in persons are identified and protected and that the rights of smuggled migrants are upheld, especially in situations where migrants would seek refugee status.

NATO member countries are all signatories to the UN Trafficking in Persons Protocol, which was adopted by the General Assembly in 2000.