Under the patronage of Sheikha Mozah Bint Nasser and in partnership with the Qatar Foundation for Combating Human Trafficking (QFCHT) through an in-kind contribution, the League of Arab States (LAS) and the United Nations Office on Drugs and Crime (UNODC), the Arab Initiative to Build National Capacities to Combat Human Trafficking in the Arab Countries was launched in 2012 and aims to build national capacities in the 22 member countries/territories of the League of Arab States to effectively combat human trafficking, through technical assistance in (i) establishing national and regional coalitions to fight human trafficking (ii) promoting the ratification and implementation of the Protocol to Prevent, Suppress and Punish Trafficking in Persons, especially Women and Children (Trafficking in Persons Protocol), (iii) strengthening the institutional and human capacities of criminal justice systems, (iv) improving mechanisms for the appropriate identification, referral, support, and protection of trafficked victims and (v) raising the awareness of the crime and its devastating consequences on individuals and societies at large. 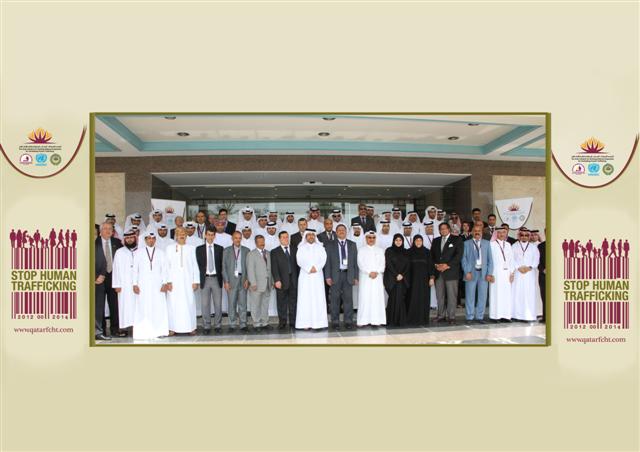 Since the launch of the "Arab Initiative to Build National Capacities to Combat Human Trafficking in the Arab Countries" at the Human Trafficking Forum held in Doha in January 2012 and in partnership with QFHCT and the LAS, UNODC has organized sixteen capacity-building activities and approximately 800 professionals from law enforcement agencies, criminal justice practitioners, members of national committees to combat human trafficking, legislators, social workers and media representatives from the entire Arab region received various specialized trainings in the areas related to fighting human trafficking. In addition to capacity-building activities, and in association with the LAS's Unit for fighting human trafficking UNODC has developed concepts and terms of procedures for national, sub-regional and regional networks in order to enhance cooperation between different sectors/agencies/countries, and ensure sustainability of the results achieved by the initiative beyond its lifecycle. Moreover, several studies, some of which are in progress, were undertaken to review existing anti-trafficking legislations in the Arab region and assess the capacities of service providers assisting victims and witnesses so as to bring about useful best practices on victim care and protection and improve the legal and regulatory framework on combating human trafficking in the Arab region. The partners of the Arab Initiative work in close collaboration with various specialized UN agencies and International Organizations to profit from the best practices, lessons learnt, methodologies and tools available.