Chandigarh (India)/07 June 2019: Experts from law enforcement agencies, civil society and media from eight Indian states and Union Territories emphasized the need for greater government investments to support multi-stakeholder mechanisms and responses aimed at countering trafficking in persons, at a consultation hosted by UNODC in collaboration with the Ministry of Home Affairs, Government of India at Chandigarh. The consultation was the fourth in a series of five stakeholder meetings lead by UNODC and financed by the UK to strengthen anti-trafficking coordination across India. The deliberations brought together stakeholders from Chandigarh, Delhi, Gujarat, Haryana, Himachal Pradesh, Jammu and Kashmir, Punjab and Rajasthan. 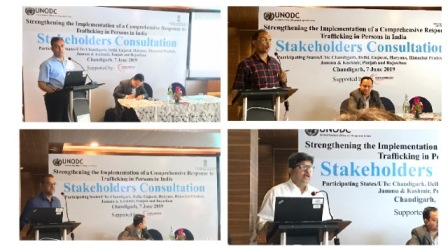 Participants concurred that the increasing number of cases of re-victimization of victims of trafficking indicates the need for effective rehabilitation programmes. Concerns were once again raised on the emerging use of tech-based platforms and online media by trafficking networks, and the need to strengthen capacities among stakeholders. Sustained efforts towards strengthening capacities of law enforcement agencies, through trainings and refresher courses, were suggested as a vital step. 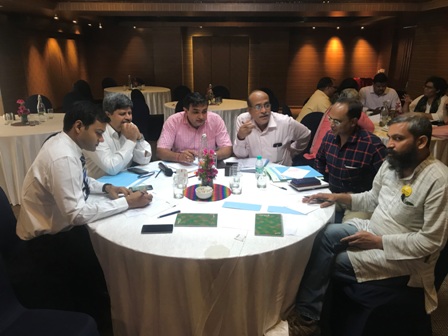 Revealing emerging trends observed in western and northern states, senior law enforcement officials asserted, "The police must adopt a victim-centred approach in dealing with these cases. It is critical to establish mini anti human trafficking units in all police stations."

This consultation resulted in identification and discussion of various challenges related to trafficking in persons and helped in building stronger coordination among various stakeholders such as law enforcement, civil society, media and governments in order to prevent and address trafficking in persons through strengthening of existing policies, action plans and strategies.

This activity was held in the framework of the UNODC project on "Strengthening the implementation of a comprehensive response to trafficking in persons in India and Sri Lanka", implemented as part of the UNODC Global Programme against Trafficking in Persons, jointly with the UNODC Regional Office for South Asia and with the financial support of the United Kingdom.