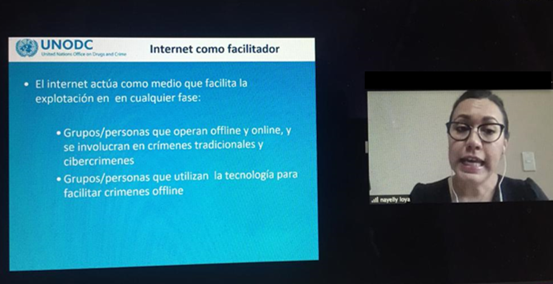 Ecuador, 2 July 2020 - The risks of the Internet in relation to human trafficking and the need to improve prevention was the topic of a webinar organized by the Ministry of Government, together with the United Nations Office on Drugs and Crime (UNODC) - through the TRACK4TIP initiative - the Office of the Attorney General and the Ministry of Education.

Due to the measures taken by countries to contain COVID-19, the Internet became one of the mechanisms used to capture and exploit undocumented migrants in search of employment in countries of destination. Their vulnerable condition increases the risk of falling into the hands of traffickers.

Tomás Guayasamín, head of the Directorate for the Prevention of Human Trafficking and Migrant Trafficking of the Ministry of Government, was the moderator of the webinar.  According to statistics he presented, between January 2017 and March 2020, 668 victims of trafficking were rescued, 75% of whom were women between the ages of 12 and 29.

"Children do not need to leave the house. They can be exploited within their own home, when they are with their parents," warned Nayelly Loya, coordinator of UNODC's Global Cybercrime Programme.

Ms. Loya spoke about the risks of social networks, the dark web, grooming, and child sexual exploitation and how these situations can be linked with human trafficking.

According to the UNODC expert, the Internet is the means to connect clients with exploiters, who offer people as commodities.  The sexual exploitation of victims can even be transmitted in real time. "The Internet is indispensable for shaping the crime," Loya told a virtual room with more than 300 attendees.

For his part, prosecutor Eduardo Estrella, encouraged the justice operators at the conference that investigations should lead to evidence of trafficking cases. "It is a cross-cutting crime and proving it is a complex task that requires more attention from us. We have to learn to listen to the victims".

In view of the vulnerability of girls and women to trafficking, including those arriving within migratory routes, Nelly Jácome, technical secretary of the Council for Gender Equality, advocated for a look that prioritizes the situation of this population segment, mostly affected by this crime for the purpose of sexual exploitation. "Prevention policies aimed at addressing the causes of trafficking cannot be neutral. They must necessarily address the gender inequality that puts women and girls at greater risk.

Finally, Victor Pazmiño, an analyst with the Pedagogical Integration of Technologies for Education, recalled that Ecuador has 13.8 million mobile phones with Internet access. "Everything you do on the net leaves a digital footprint. If the kids can't connect at home, they'll do it at school, at the bus stop, in the park".

UNODC, through TRACK4TIP, seeks to provide justice operators with information on the modus operandi of criminal networks related to human trafficking behind current migration flows.

TRACK4TIP is a three-year initiative (2019-2022), implemented by the United Nations Office on Drugs and Crime (UNODC), and supported by the Office to Monitor and Combat Trafficking in Persons JTIP at the United States Department of State.

The project benefits eight countries in South America and the Caribbean with national and regional actions in Ecuador, Peru, Brazil, Colombia, Dominican Republic, Trinidad and Tobago, Curaçao and Aruba.

The overall objective of the project is to improve the regional criminal justice response to human trafficking in the migratory flows of the beneficiary countries through a multidisciplinary and victim-centered approach, with actions at the regional and national levels to identify, prevent and prosecute cases.