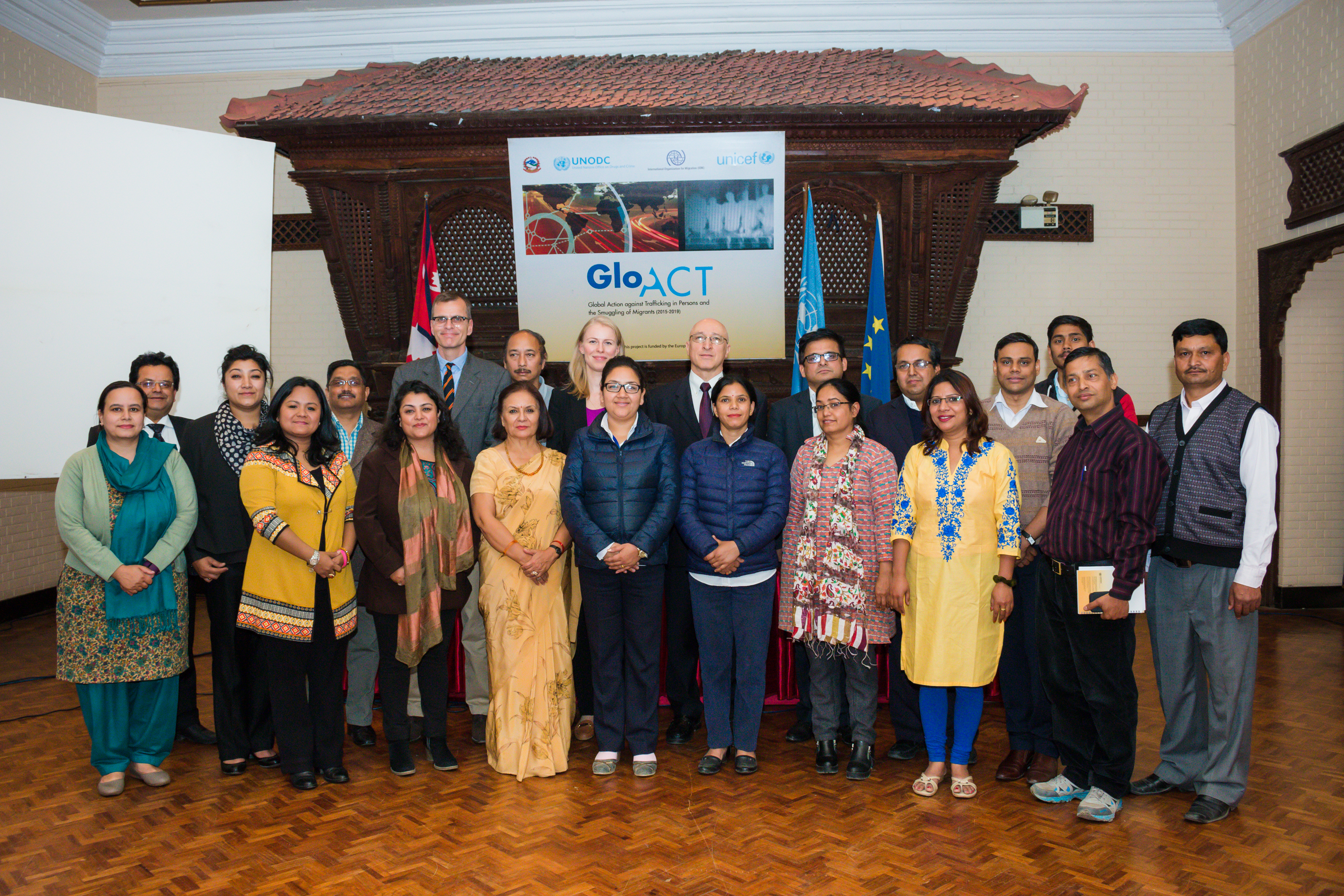 Nepal, 7 March 2017 - The Government of Nepal, UNODC and the European Union, in the presence of national partners and stakeholders, launched GLO.ACT - the Global Action to Prevent and Address Trafficking in Persons and the Smuggling of Migrants on the eve of the 107th International Women's Day. GLO.ACT is a global joint initiative from UNODC and the European Union, being delivered in partnership with the International Organization for Migration (IOM) and the United Nations Children's Fund (UNICEF).

GLO.ACT aims to prevent and address the two crimes within 13 strategically selected countries from across the globe, and Nepal is the latest to join in this effort. Over the next three years, GLO.ACT will implement activities in the areas of assistance and protection to victims and vulnerable people, as well as in prevention, investigation and prosecution of the two offences of trafficking and smuggling.

Representing the Nepalese government, Ms Radhika Aryal, Joint Secretary, welcomed the launching of GLO.ACT in Nepal and spoke of the gravity of the human trafficking problem in Nepal, calling it "internal, external and cross-border in nature" and highlighted the ongoing efforts of the Nepalese government to address it, including through existing mechanisms and policies against trafficking in persons. Ms Aryal further spoke of the many challenges that remain in bringing to justice those who traffic people and smuggle migrants and in protecting human trafficking victims and vulnerable migrants, reiterating the commitment of the Nepalese government to continue addressing these issues through GLO.ACT.

The Head of Cooperation of the European Union Delegation in Nepal, Mr Andreas Roettger underlined that addressing all forms of trafficking in persons and the fight against the smuggling of migrants is a priority for the EU and its Member States. He also highlighted that the EU Action Plan against Migrant Smuggling 2015-2020 has as one of its priorities, a stronger cooperation with third countries by pursuing existing and launching new political dialogues with priority states of origin and transit and increasing capacity of partner countries to fight organized criminal networks of smugglers. Welcoming the launch of GLO.ACT, Mr Roettger in the words of Immanuel Kant, reminded the audience that we must " treat humanity, whether in your own person or in the person of any other never merely as a means to an end but always at the same time as an end".

UNODC's Regional Representative for South Asia, Mr Sergey Kapinos, underlined that GLO.ACT approach is strategic in identifying areas for concrete impact, while at the same time demonstrating a long-term commitment and follow-up to ensure sustainability and continuity of results. Finally, Mr Kapinos stressed that "most importantly the tools and processes developed should be used to increase the protection of individuals and the overall deterrent effect, while mutually reinforcing the rule of law and sustainable governance" across the 13 GLO.ACT countries and beyond.

An overview of the current situation in Nepal was provided by Dr Madhurika Singh, independent expert, who explained that TIP and SOM in Nepal are closely interlinked with internal and external migration and the increasing demand for cheap labour in national and international markets is resulting in Nepali women, children and men trafficked not only for sexual exploitation, but also for labour exploitation, organ trafficking, and modified forms of commercial sex market. Dr Singh also spoke of limited data and research as well as the lack of conceptual clarity on the differences between human trafficking, unsafe migration and migrant smuggling, stressing the need to look at look at these issues from a globalized economic context.

Speaking on behalf of GLO.ACT, Ms Anna Tsitsina, UNODC Crime Prevention and Criminal Justice Officer, provided an 18-month update on GLO.ACT implementation progress and elaborated on an overview of the global findings in all 13 GLO.ACT countries and ensuing recommendations for action. Ms Tsitsina stressed that while the findings revealed both similarities are differences, the challenges were endemic in most countries and stated that "our strength as members of the GLO.ACT community is in our diversity and the opportunity we have to work together".

Ms Binija Goperma, GLO.ACT National Program Coordinator in Nepal, presented the national-findings of the GLO.ACT gaps and needs assessment in Nepal and provided an update on forthcoming activities in Nepal. Ms Goperma discussed the assessment findings and project implementation phase, relating to the components on strategy, policy and planning, strengthening legal frameworks, capacity building, regional and international cooperation, protection and assistance, including for children.

Also present at the launch were the Under-Secretaries of the Ministries of Foreign and Home Affairs of Nepal, as well as Nepal police and other government entities, academia, civil society and the media.