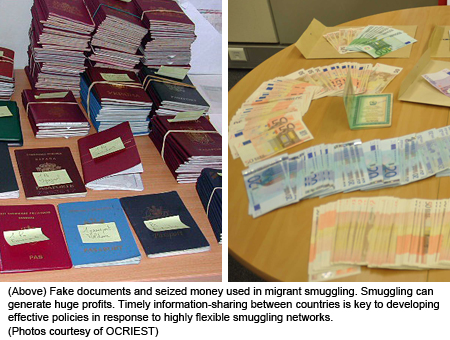 The reports,  Migrant Smuggling in Asia: A Thematic Review of Literature and the accompanying  Annotated Bibliography , provide a systematic review of available empirical knowledge on smuggling of migrants. These resources identify gaps in what is known about the smuggling of migrants around, in and out of Asia into Europe, North America and Australia and the Pacific.

Produced with financial support from the Government of Australia's Department of Immigration and Citizenship, the two publications are the first major products of the Coordination and Analysis (CAU) unit of the UNODC Regional Centre for East Asia and the Pacific. UNODC conducted the research in support of the Bali Process, which is a regional, multilateral process to improve cooperation against migrant smuggling, trafficking in persons and related forms of transnational crimes.

Migrant smuggling remains a significant challenge throughout the region. Abuse of legal entry channels and the misuse of legal travel documents obtained by fraudulent means continue to play an important role in facilitating migrant smuggling. Smuggled and irregular migrants are exposed to considerable danger during the smuggling process, and are often left vulnerable to human trafficking on reaching their destination.

By consolidating information currently accessible on migrant smuggling, the  Thematic Review of Literature aims to guide further research that will contribute evidence-based policies to prevent and combat the smuggling of migrants while simultaneously upholding and protecting the rights of those who are smuggled.

International Framework for Action to implement the Smuggling of Migrants Protocol