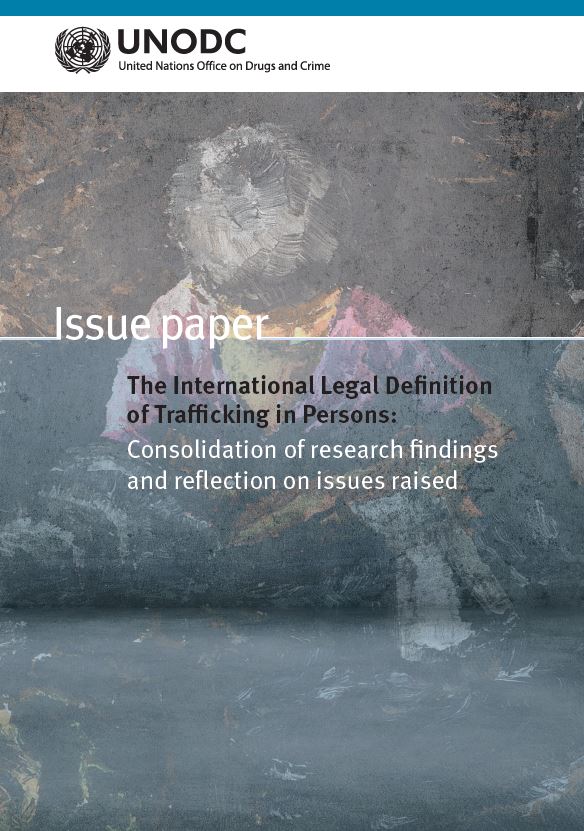 In line with the steady progress towards universal ratification of the UN Trafficking in Persons Protocol, UNODC has, in recent years, continued to evolve its efforts to bring greater clarity on the internationally agreed-upon definition on trafficking in persons. Despite the best efforts of drafters and the harmonization of national laws with the international definition, States are in fact still grappling with practical, day-to-day challenges stemming from a lack of conceptual understanding of 'trafficking in persons'. This, in turn, leads to inconsistent application of trafficking laws and ultimately hampers the effective implementation of the international legal framework around this crime, and its national equivalents.

On 22 January 2019, UNODC launched a new Issue Paper on The International Legal Definition of Trafficking in Persons, thanks to the generous and long-term support of the Government of Switzerland. This publication consolidates learning from the drafting and publication of three earlier technical issue papers and one guidance note regarding specific elements of the legal definition of trafficking in persons:

Abuse of a position of vulnerability and other "means" within the definition of trafficking in persons (2012) and its Guidance Note (2012);

The Role of Consent in the Trafficking in Persons Protocol (2014);

The Concept of Exploitation in the Trafficking in Persons Protocol (2015).

The new paper aims, in particular, to guide consideration and development of practical guiding principles for criminal justice practitioners that emerge from the three definitional concept papers, and the underlying practical experience in over 30 jurisdictions, as well as determine next steps for further research and analysis.

In order to bring together the broadest range of views and perspectives, the development of this and the previous issue papers involved detailed in-country research, conducted through the dissemination of surveys that included analysis of national legal frameworks and associated practice, as well as interviews with national practitioners. The findings were then scrutinized during extensive consultations with independent, national and regional experts who shared information and provided important conceptual inputs as well as country case studies. The underlying cooperative efforts exemplify UNODC's commitment to ensuring the integrity of its work within its mandate of providing robust legislative assistance to States.

As part of the efforts to bring about conceptual clarity as well as stronger reflection on State practice and experience, UNODC is also currently working on the review and revision of two important guidance materials, namely the Legislative Guide to the United Nations Trafficking in Persons Protocol (published in 2004), supporting ratification and implementation of the Protocol to Prevent, Suppress and Punish Trafficking in Persons, especially Women and Children and the Model Law against Trafficking in Persons  (published in 2009), supporting the review and amendment of existing legislation and adoption of new legislation by States themselves. The revision exercise started with a first expert consultation in December 2018 and a second one in January 2019 on the Model Law. To those, a further consultation on the revision of the Legislative Guide will follow on 28-30 January 2019, as well as an additional expert consultation in early February 2019 to finalize the revision of the Model Law. The revised versions of these tools are expected to be published in mid-2019.