The Blue Heart campaign takes to the seas 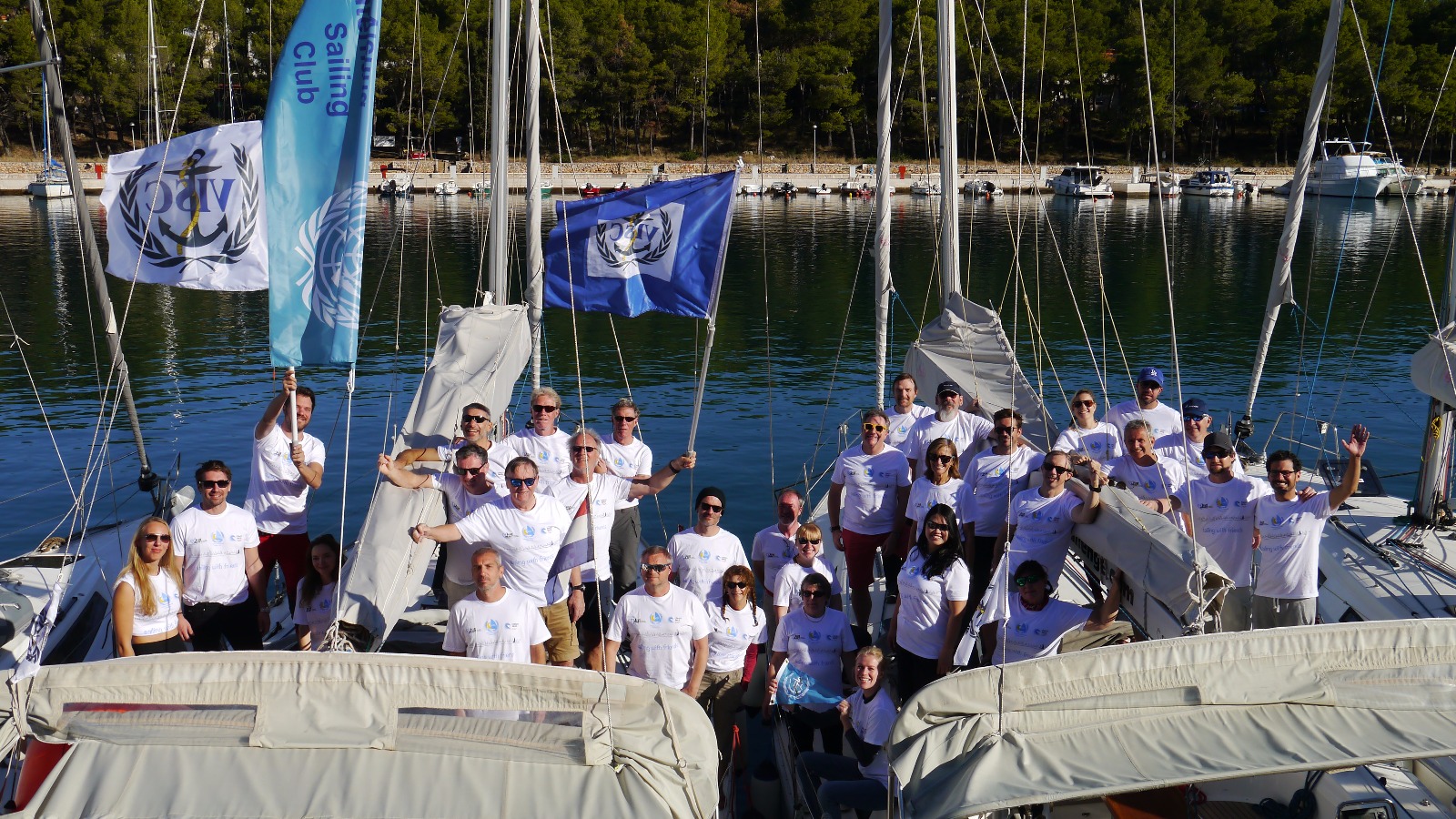 In a first for the Blue Heart campaign, last week the UN global awareness raising initiative to fight human trafficking partnered up with the Vienna International Sailing Club (VISC), to promote its cause during the club's Annual Adriatic Sailing Week in Croatia.

For the fifth year running, on 20 - 27 October 2018, thirty-eight sailors got together on nine chartered boats for a week of sailing activities off the coast of Croatia. This year the club decided to promote meaningful causes to raise awareness of the United Nations work and aims among its members, and specifically picked the Blue Heart campaign as a flagship UNODC initiative.

"We realised that being an UNOV-affiliated club, this presents an opportunity to reach out to a not-so-traditional group of stakeholders to promote UN causes in our home base in Vienna, and explain to them specifically what the Vienna-based UN agencies do to support them" - said Anna Tsitsina, member of the VISC committee and a UNODC staff member working in the anti-human trafficking team.

Blue Heart logo was featured on VISC-branded event t-shirts, and Blue Heart pins and flyers were distributed to all participants of the VISC Adriatic Sailing Week as part of their welcome package. VISC committee members introduced the causes during a club welcoming dinner in Split, Croatia. As well as the Blue Heart campaign, for its 2018 edition VISC also promoted 'Turn the Tide on Plastic' of the Clean Seas campaign by UN Environment to fight against marine plastic pollution.

Presenting the Blue Heart campaign to the members of the VISC, Ms Anna Tsitsina made a small introduction about the human trafficking issue and explained the importance of knowing about this crime. "If there is anything you take away from this talk tonight, I would like it to be the fact that just the same way we would like to keep the seas free of plastic, we want to keep this world free from exploitation. By wearing the Blue Heart pins, you show your awareness and you show that you care. Maybe you will tell about it to your family, your neighbours or your friends and spread the word. And this is already one step towards achieving our global objective".

"I feel lucky to have had an opportunity to support and raise awareness through the Blue Heart campaign during the Adriatic Sailing Week and learn about more subtle forms of this global crime. Human trafficking is not something that is normally part of our everyday conversation but during that week it was more present in discussions than ever before in my life, and that is direct proof of how increased awareness work. As a result, I have put the Blue Heart pin on my backpack and now it is with me to continue spreading awareness everywhere I go" - said Ms Guergana Broelz, independent entrepreneur from GR8 Solutions based in Vienna.

"Learning that human trafficking is not a faraway issue but it takes place at sea on vessels as close as the Mediterranean, where we go for relaxation, enjoyment and also a sense of freedom, totally the opposite to those victims of human trafficking who are enslaved on vessels at sea, was for many of us shocking. This is why I'm proud that VISC can support the campaign by wearing the Blue Heart and raising awareness within and beyond our club. Living, working and playing in a country like Austria, we are privileged to do this in secure and free environment. There are so many around the world who are not so lucky, and through supporting the Blue Heart Campaign by raising awareness of the issue we feel we are helping towards fighting human trafficking" - said Mr Peter McNeil, VISC Commodore heading the club committee.

The Blue Heart Campaign is a global awareness raising initiative to fight human trafficking and its impact on society.