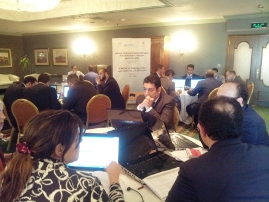 Twenty-two Egyptian officials from the Ministry of Justice, Ministry of Foreign Affairs, Ministry of Interior, Ministry of State for Administrative Development, the Public Prosecution, the National Security Authority and the Administrative Control Agency gathered on 13 August 2012, to attend a four-day workshop organized by UNODC in cooperation with the Egyptian Government at the Marriott Hotel in Cairo, Egypt.

The overall objective of the workshop was to build the capacities of Egyptian officials with regards to the United Nations Convention Against Corruption (UNCAC) Review Mechanism.

Shedding light on the whole review process, identifying legal and institutional gaps that should be addressed by Egypt, and ensuring that Egypt takes necessary reform and corrective measures to combat corruption are the major goals of the Workshop.

The UNCAC is the only legally binding international anti-corruption instrument. Adopted by the UN General Assembly in October 2003, it is the first global framework to harmonise anti-corruption efforts worldwide. The Convention entered into force in December 2005 and currently has 161 State Parties (including Egypt). Not only does the UNCAC have worldwide coverage, but it also has extensive and detailed provisions. It is widely recognised as the most promising initiative to curb the scourge of corruption.

In November 2009, the 3rd UNCAC Conference of the States Parties adopted a review mechanism for the UNCAC. The review of implementation of the Convention is a crucial process, as it helps States parties to identify challenges and good practices. Egypt will be reviewed next year (postponed from this year due to current political situation in Egypt).

Dr. Ghada Moussa, representative of the Ministry of State for Administrative Development, H.E. Ayman Ahmed Mokhtar El Gammal, representative of the Ministry of Foreign Affairs, and Mr. Hussein Hassan, UNODC Anti-Corruption Project Officer, were the main moderators. Other presenters in the workshop were four UNODC experts, in addition to the participation of the EU Delegation in Egypt at the workshop.

The workshop combined theoretical aspects with practical exercises and simulation of the review process as a means to ensure full know-how transfer to participants. The assessment of the participants on gaps and best practices on the status of implementation of UNCAC will be built upon within future activities aimed at strengthening the anti-corruption framework in Egypt.

This workshop falls within the framework of the European Union-funded UNODC anti-corruption project "Supporting Measures to Combat Corruption, Money Laundering and to Foster Asset Recovery Measures in Egypt".