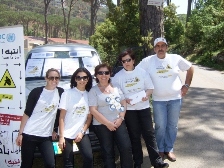 For the second year in a row, UNODC participated in the annual Ecole Supérieure d'Ingénieurs de Beyrouth (ESIB) rally paper.  This year's rally, on Saturday, 5 May 2012, marked the 24th ESIB Rally. Since 1962, the ESIB rally papers have garnered the reputation as the most successful, challenging, and entertaining rally paper in Lebanon. Participants embark on a two day race across Lebanon, where their skills and knowledge are put to the test. Teams map out their route by solving riddles to locate proceeding checkpoints, and by submitting completed questionnaires at the end of each round. The winners of the rally paper are rewarded with generous prizes, including cash and plane tickets and the events culminate in a party hosted by ESIB on 6 May.

120 cars set out at 7 AM on 5 May, and UNODC was ready to challenge participants at their second checkpoint of the day, tucked into the mountains of Dleibe. UNODC had prepared a questionnaire and two flyers on HIV and drugs to distribute to each team. Participants were required to provide answers to the questionnaire, for which some of the answers could be found in the flyers, but others needed additional research to answer.

Additionally, teams were required to submit a 2 minute video for drug awareness, to be submitted by the end of the competition. Teams were also invited to participate in bonus challenges, which were very entertaining for both spectators and participants.

UNODC involvement in the ESIB Rally Papers has a tremendous impact for raising awareness about drug and HIV issues. Within the span of a few hours the information UNODC prepared reached a wide audience of both young men and women from across the country. Close to 1000 students participated (around 400 in the cars and 600 at the base), between the ages of 18 and 24, which is the critical age when youth are at risk of experimenting or initiating drug use because of peer pressure, among other factors. UNODC participation is particularly important because it brings the discussion of HIV and drug use out in the open thus allowing youth to make informed choices. It provides a forum to spread awareness where young people do not have to feel embarrassed or uncomfortable discussing the issues. Involvement in such an important event for Lebanon's university students reflects UNODC's strong engagement with the youth and is critical for encouraging drug prevention and HIV awareness.

UNODC participation in the Rally is part of the support it provides to Member States in the region including Lebanon on evidence-based drug prevention among youth under project XNAJ58 "Promoting good practices and networking to reduce demand for and harm from drugs" funded by the Swedish Government. In addition to engaging youth in such events where they learn about drug prevention, the project has also provided capacity building to the Lebanese Government in piloting a drug prevention programme called "UNPLUGGED" in schools using life skills education among youth aged 12 to 14 years old.

UNODC started working in Lebanon in 1999 on a project targeting juvenile justice reform and has since expanded its activities to encompass penal justice reform, including prison reform, and combating trafficking in human beings.