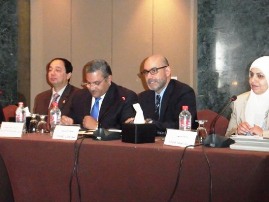 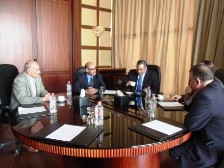 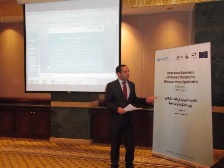 Taking a new practical step towards assisting the Egyptian Government in its fight against corruption, 70 representatives from various national service ministries and governmental agencies, including oversight bodies such as the Transparency and Integrity Commission, the Parliament, the civil society and political parties joined together in a two-day workshop organized by United Nations Office on Drugs and Crime (UNODC) and the Ministry of Administrative Development with the purpose of strengthening Egypt's current reporting and complaints mechanisms against corrupt acts.

The workshop, which took place on 22 May 2012 at the Grand Hyatt Hotel in Cairo, Egypt, brought together national and international experts to assess current reporting and complaint mechanisms adopted in the main ministries and anti-corruption agencies in Egypt.  International mechanisms and best practices were examined and lessons learned were discussed. The main objective of the workshop was "To put into place effective and transparent complaint systems that would strengthen trust between the citizens and the Government and would contribute to curbing corruption in the State's administrative apparatus," stated Dr. Ashraf Hassan Abdel-Wahab, Minister of State for Administrative Development, in his opening speech.  "Such complaints help identify weaknesses and defects that require rapid interventions to address them," he added.

Dr. Mohamed Abdel Hamid Al Nashar, Minister of Higher Education expressed his belief in exchanging experiences with other peoples of the world and urged Egyptians "to watch and learn ... with the purpose of producing distinguished cadres in Egypt."  He encouraged those submitting complaints to think and be creative in proposing viable solutions to the problem.

Mr. Masood Karimipour, UNODC Regional Representative, emphasized the extent to which "the fight against corruption is central to the struggle for human rights." Mr. Karimipour also shed light on how corruption "breeds a sense of inequality and injustice" and how such injustices undermine "basic principles such as non-discrimination that are enshrined in the UN Declaration of Human Rights and the UN Convention against Corruption as well as subsequent international laws to which Egypt is a signatory." Mr. Karimipour added that the world was inspired by Egyptians who have demanded an end to corruption in their country and pointed out that the participants in these workshops are reflecting that national commitment and giving their country hope that they can and will combat and end corruption. "UNODC stands ready to help you in this mission," Mr. Karimipour concluded.

Stressing the urgent need for an effective complaints and reporting mechanism, Ms. Ghada Ali Moussa, Director of the Centre of Governance and Secretary General of the Transparency and Integrity Commission, called for the "reform and development" of the complaint and reporting systems "to become one integrated and interdependent system that facilitates a true and effective response to the demands of the people."

Mr. Atef Yacoub, Head of the Consumer Protection Agency, emphasized the necessity of communication between different government agencies in protecting clients from white collar crimes, particularly corruption, and welcomed the participants in contributing to setting the foundations of a new Egypt.

The workshop, which was implemented under the EC funded project for Supporting Measures to Combat Corruption, Money Laundering and to Foster Asset Recovery in Egypt, reviewed all relevant legal national and international frameworks. A UNODC expert gave an in-depth presentation on the legal regime of reporting and complaints within the Egyptian law in comparison with the United Nations Convention against Corruption. The workshop went on to offer its participants various examples of complaint systems across the world.  Best practices and lessons learned from international experiences of reporting and complaint systems were examined in the context of  opportunities and challenges facing Egypt.