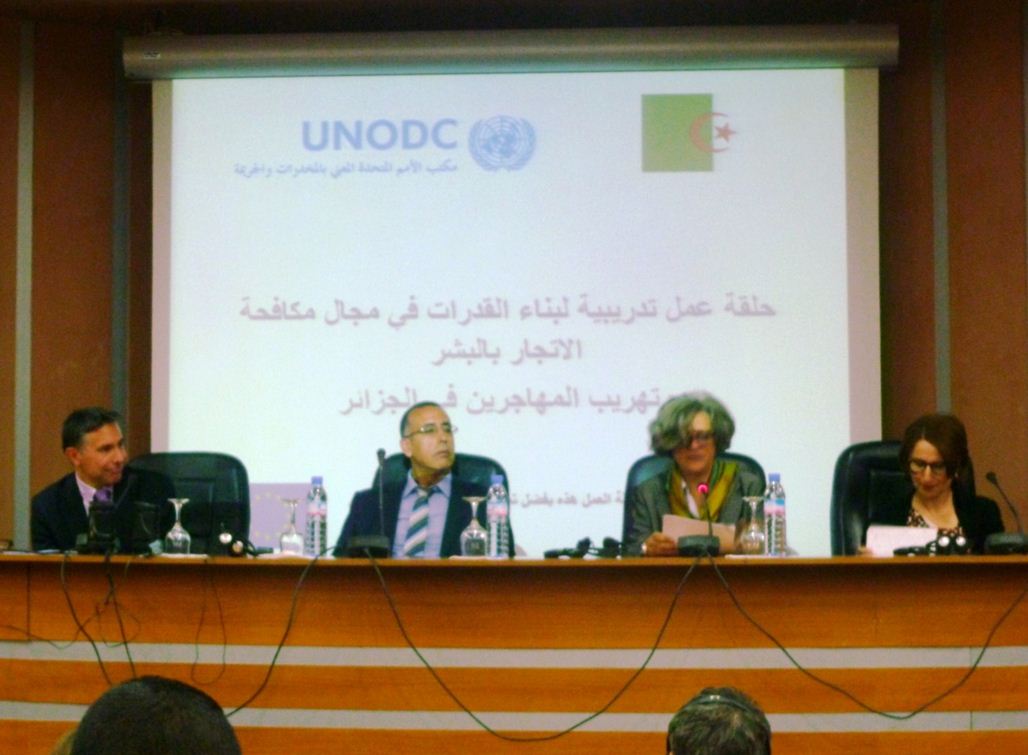 In view of its geographical location overlooking the Mediterranean Sea and the southern part of Europe, Algeria is a transit and destination country for thousands of men, women and children originating from sub-Saharan African countries and wishing to reach Europe or the Middle East. In the process, these migrants who enter Algeria illegally may fall prey to human trafficking rings and may be subjected to forced labour and domestic and/or sexual exploitation. The vulnerability resulting from their irregular status in the country undermines their access to the existing mechanisms of protection and assistance provided for in the Algerian domestic law. In this regard, the Algerian authorities are aware of the need to address this issue through an integrated approach which is consistent with the relevant provisions of the international instruments ratified by Algeria.

Recognizing such need, the Algerian Government took a concrete step to strengthen the capacities of its magistrates with the technical assistance of UNODC. With the objective of supporting the Algerian Government's efforts to combat and better prosecute cases of trafficking in persons (TiP) and Smuggling of Migrants (SoM), UNODC organized a four-day training workshop for Magistrates in charge of TiP and SoM.

The Workshop, which took place at the Résidence des Magistrats in Algiers, was attended by a total of twenty-eight magistrates, including judges and prosecutors representing 19 Wilayas from across the country.

Participants in this workshop were provided with the opportunity to address in depth the challenges throughout the different phases of the criminal justice response. The workshop was held in working groups (including a mock trial at the end of the workshop) and a plenary, which allowed for more substantial discussions. Key areas of focus included: the identification of trafficking victims and smuggled migrants, technical and investigative procedures, prosecutions of trafficking and smuggling cases as well as aspects of international cooperation and the protection/assistance of trafficking victims and smuggled migrants. The workshop also focused on the analysis of national legislation as well reviewing practices and legal frameworks of neighbouring countries

Participants were also shown Affected for Life , a UNODC documentary which illustrates the different forms of trafficking. They were also given an overview of the United Nations Convention against Organized Transnational Crime, ratified by Algeria in October 2002. The Algerian Government reaffirmed its firm commitment to continue preventing and combating these two phenomena and requested that UNODC replicate the workshop to target a minimum of 100 magistrates in the near future

As a State Party of the Protocol to Prevent, Suppress and Punish Trafficking in Persons, especially Women and Children and the Protocol against the Smuggling of Migrants by Land, Sea and Air since March 2004, Algeria has been working closely with national and international counterparts in order to enhance TiP and SoM efforts.

For information on UNODC project 'Strengthening the framework of the Arab Region to prevent and combat human trafficking' please contact: Aspasia Plakantonaki, aspasia.plakantonaki AT unodc.org

This activity was made possible through funding from the European Union