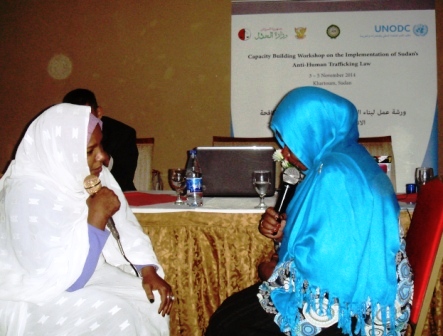 As one of the largest countries in Africa, Sudan has become a transit hub of mixed migration flows from the Horn of Africa to North Africa and Europe. The irregular nature of many of these migrants often puts them in a very vulnerable position as they lack protection and are thus susceptible to being victimised through kidnapping, extortion and human trafficking.

In response, the Sudanese Government adopted a law to combat human trafficking on 3 March 2014, and on 2 December 2014 acceded to the United Nations  Protocol to Prevent, Suppress and Punish Trafficking in Persons, Especially Women and Children supplementing the  United Nations Convention against Transnational Organised Crime .  Furthermore, Sudan recently established  a National Committee for Combating Human Trafficking.

In support of these major steps and in the framework of the  Arab Initiative to Build National Capacities to Combat Human Trafficking, UNODC undertook two activities in Sudan since November 2014.  The first of which is a three-day training workshop held 3-5 November 2014 targeting members of the National Committee for Combating Human Trafficking, and other relevant practitioners.  The training sought to raise awareness of the human trafficking crime and build national capacities to implement the national anti-human trafficking law.

The second activity was an awareness-raising event co-hosted with the Delegation of the European Union to Sudan on 29 November 2014 to promote the Blue Heart Campaign against human trafficking.  The event, which was attended by government officials, journalists, diplomats, activists, celebrities and youth, included a special screening of a documentary film on the global crisis in human trafficking titled " Not My Life", and aimed at rallying Sudanese public opinion against human trafficking.

In his speech, UNODC Regional Representative for the Middle East and North Africa, Mr. Masood Karimipour, cited some of the findings of  2014 UNODC  Global Report on Trafficking in Persons depicting the seriousness of this crime, and emphasized the need for concerted efforts to address it, stating "If we are to fight human trafficking we need a comprehensive and coordinated approach, globally and locally.  We need a response that creates partnerships to support criminal justice, victim assistance and protection, human rights, migration policy and labour market regulation".

Mr. Karimipour highlighted the leading role UNODC plays in fighting this crime, stating that "Under our Regional Programme for the Arab States we offer technical assistance, helping to draft laws and create comprehensive national anti-trafficking strategies, providing specialized support for the development of local capacity and expertise, as well as encouraging cross-border cooperation in investigations and prosecutions".

The Head of Delegation of the European Union to Sudan, Ambassador Tomas Ulicny, also addressed the audience expressing his pleasure to host this event to rally Sudanese public opinion against human trafficking.  He added that human trafficking is a serious violation of human rights and is a crime that strips people of their rights, ruins their dreams, and robs them of their dignity. It is a global problem and no country is immune. Millions of victims are exploited every year through this modern form of slavery.  Ambassador Ulicny together with Mr. Karimipour encouraged participants to show solidarity with the victims of human trafficking and raise their voices against this crime.

With millions of victims around the world, the Blue Heart Campaign is a key component of UNODC efforts, as it aims to raise awareness on human trafficking in order to garner support and inspire action to stop this crime.