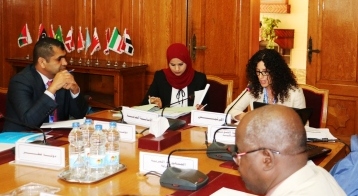 The Steering and Follow-Up Committee of the Regional Programme for the Arab States to Prevent and Combat Crime, Terrorism and Health Threats, and to Strengthen Criminal Justice Systems in Line with International Human Rights Standards (2016-2021), convened in the Headquarters of the League of Arab States in Cairo, on 16-17 November 2016.

Fifty four representatives of Ministries of Interior, Health, Justice and Foreign Affairs from the Arab countries covered by the Regional Programme constituting the Steering and Follow up Committee met the first time since the launch of the new Regional Programme on 9 May this year. The purpose of the meeting was to oversee the implementation of the Regional Programme and facilitate effective cooperation between UNODC, LAS and the Member States concerned.

Ambassador Jawad highlighted the significance of this meeting as it comes at a time when terrorism and organized crime are increasing and destabilising the region.  Stressing LAS support to UNODC in the implementation of its Regional Programme, Ambassador Jawad stated, "Through this meeting, we look forward to complement and update strategies and mechanisms on combating criminal and terrorist threats and to strengthen criminal justice systems".

On his part, Mr. Karimipour, denoted the nexus between organized crime and terrorism, as well as the challenges posed by foreign terrorist fighters, all of which have a direct impact on good governance and sustainable development. He commended partners' commitment towards "peace, security and rule of law", as well as national counter-terrorism efforts, which have led to a decline of territories held by terrorist groups and reduced the number of attacks conducted in some countries.

The Regional Programme was elaborated through extensive consultations with national counterparts, drawing on 19 years of UNODC presence in the region, during which a number of the challenges posed by illicit trafficking, organized crime, terrorism, corruption, criminal justice, crime prevention, drug abuse and HIV/AIDS were addressed.

The Meeting in the News:

AL meeting on terrorism-combat to be held Wednesday