GLO.ACT supports the establishment of a network of prosecutors representing each court of appeal in Morocco 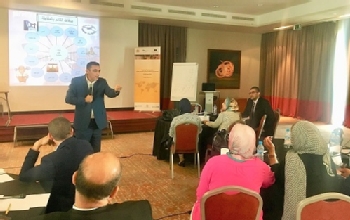 Under the framework of the Global Action against Trafficking in Persons and the Smuggling of Migrants (  GLO.ACT), UNODC organized a three-day workshop for 20 prosecutors working on the eradication of criminal networks engaged in Trafficking in Persons (TIP) and the provision of protection to victims. Every Court of Appeal of the Kingdom of Morocco was represented at the workshop in Tangier held from 24 to 26 of July 2018. The workshop focused on prosecution of TIP cases as, almost two years after the entry into force of  Law 27-14, Moroccan prosecutors readily admit facing difficulties and challenges when identifying and investigating cases, and when bringing criminals to justice.

As under Law 27-14, human trafficking offenses constitute a serious crime directly handled by the courts of appeal, the Moroccan public prosecution decided to establish a network of prosecutors representing each court of appeal. The aim of this network is to have prosecutors that have developed in-depth knowledge on the complexities related to TIP cases. Thus, to build a common understanding, practice and network of professionals working on the same topic, two prosecutors per court will be trained by UNODC under the framework of GLO.ACT. This workshop, held from 24 to 26 of July 2018, was the first session for the first group of prosecutors of the network with a second session to be held in September 2018.

Speaking about the network,  Mrs. Amina Oufroukhi  ,  the head of the judicial cooperation department at the specialized public prosecution office, responsible for women's and children's issues, vulnerable populations, and trafficking in persons and the Department of Justice representative for GLO.ACT said, "The recently acquired independence of the public prosecution in the Kingdom of Morocco created a momentum to developed the capacity of specialized prosecutors to deal with human trafficking cases." In addition, Mr. Mohamed Abdennabaoui, General Prosecutor of the Kingdom of Morocco, just adopted a new directive on 3 June 2018 to guide the prosecution strategy towards the better protection of TIP victims.

During the workshop, the participants asked many questions related to the application of the directive. Dr. Mohanad Dweikat, a UNODC expert working in the region and Mr. Ahmed Al Rakib, an Egyptian prosecutor and an expert in transnational organized crime as well as Mr. Mohamed Chabib, a national expert, worked with the participants on real TIP cases in order to build a better understanding of the role of the prosecution in the identification of victims, prosecution techniques and on victim protection principles. Using real case studies and engaging in practical exercises on investigations techniques, enabled UNODC experts to provide participants with available tools to facilitate the prosecution of the perpetrators of this crime and to avoid the re-victimization of TIP victims.

The Global Action to Prevent and Address Trafficking in Persons and the Smuggling of Migrants (GLO.ACT) is a four-year (2015-2019), €11 million joint initiative by the European Union (EU) and the United Nations Office on Drugs and Crime (UNODC). The project is being implemented in partnership with the International Organization for Migration (IOM) and the United Nations Children's Fund (UNICEF). GLO.ACT provides assistance to governmental authorities and civil society organizations across 13 strategically selected countries: Belarus, Brazil, Colombia, Egypt, Kyrgyz Republic, Lao PDR, Mali, Morocco, Nepal, Niger, Pakistan, South Africa, Ukraine. It supports the development of more effective responses to trafficking and smuggling, including providing assistance to victims of trafficking and vulnerable migrants through the strengthening of identification, referral, and direct support mechanisms.