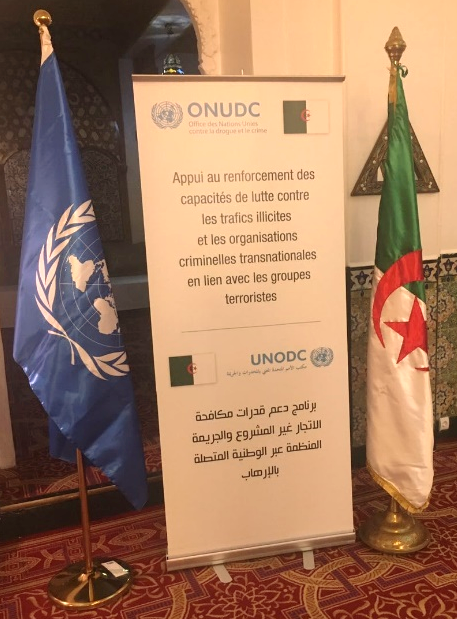 The deterioration of the security situation in the Sahel has enabled transnational organized crime groups and armed groups to grow, and to establish large networks of trafficking in drugs, firearms and even human beings expanding to North Africa, and leading to an important source of revenue for terror crimes.

North African and Sahel Governments have launched national security policies and strengthened their capacities in countering terrorist and transnational threats to prevent further destabilization caused by a potential expansion of criminal networks. Several regional and bilateral mechanisms already exist through which operational and technical cooperation on security and judicial matters between the North African and Sahel Governments has been improved.

In order to strengthen these mechanisms, UNODC through its Regional Offices for the Middle East and North Africa, and the West and Central Africa, joined efforts to organize a trans-regional forum in Algiers, Algeria, from 23 to 25 January 2018, to exchange knowledge, experience and best practices between these countries.

Besides experts, donors and representatives of UNODC, this gathering brought together Representatives of the Ministries of Justice and Foreign Affairs as well as The Police, Gendarmerie and Customs Services of Algeria, Burkina Faso, Chad, Libya, Mali, Mauritania, Niger, and Tunisia.

In her opening speech, Cristina Albertin, UNODC Regional Representative for the Middle East and North Africa, underlined that "strengthening cross-border and regional cooperation have evolved as the most critical matters when it comes to curbing trafficking of goods or even people and related crimes". She further stated that "no country and no law enforcement agency in North Africa or the Sahel has the volume and kind of resources to fight alone against a widening network of transnational crime groups. Therefore, enhancing international cooperation among countries and institutions is a must, a condition sine qua non."

This First Forum aimed at establishing a foundation for a greater South-South cooperation between North African and Sahel Governments. This cooperation and exchange of information becomes crucial as the security threats are becoming more complex and transnational in nature.

A regional analysis of the various security threats and routes used by smugglers and terrorist groups were presented during this high-level event. Subsequently, a working group was put together to identify synergies between the various law enforcement agencies and the criminal justice networks in the two respective regions. At the end of the Forum, good practices and recommendations were formulated, aiming to strengthen cooperation between the Sahel countries and their Maghreb neighbors. Among these recommendations:

- To encourage customs administrations of the African Union countries to join the Customs Enforcement Network for the fight against fraud (CENcomm);

- Under the aegis of the African Union, to study the possibility of establishing a secure communication channel between the G5 Sahel platform and AFRIPOL through the national liaison offices;

- To initiate reflection on the possible opening of cooperation platforms to countries interested to cooperate (for example: the Sahel countries' criminal justice cooperation platform, the network of prosecutors and central authorities of West Africa against organized crime WACAP).

This Forum was organized thanks to the financial support of Japan and the Netherlands and is part of the UNODC Border Control Project and UNODC Sahel Programme, that aim to promote capacity-building in the fight against terrorism and transnational organized crime, of the authorities of the region through accessible, effective and efficient criminal justice systems.