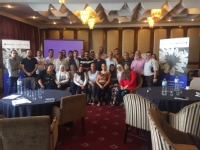 Injecting drug use continues to drive the HIV epidemic in many countries around the world as unsafe injecting practices, including the sharing of contaminated needles and syringes, is a major route for the transmission of both HIV and viral hepatitis among people who inject drugs (PWID).

Egypt is estimated to have an HIV prevalence of less than 0.02% among the general population, which is considered as low-prevalence. According to the UNAIDS databook 2017, the number of people living with HIV in 2016 was 10,000-12000 which increased almost 50% since 2010 with newly reported infection of 1600 in 2016.  Despite an overall lower HIV prevalence among the general population in Egypt, emerging data from a recently conducted Bio-Behavioral Surveillance Survey (2010) among key populations, including: People who Inject Drugs; Sex Workers; Men having Sex with Men; and Street Children, in three governorates revealed a concentrated epidemic among people who inject drugs (6.8% in Cairo and 6.5% in Alexandria) and Men having Sex with Men (5.7% in Cairo and 5.9% in Alexandria).

To address the current situation, UNAIDS has pledged to support the Egyptian national response to HIV/AIDS as part of the new Country Envelopes approach which is a dynamic, differentiated and realistic response to evolving priorities.

The UNODC Regional Office for the Middle East and North Africa (UNODC ROMENA) will implement prevention and capacity-building activities which are aligned with the National Strategic Plan, the UN Joint Team on HIV/AIDS Plan of Action and the overall global UN mandates to prevent and treat HIV/AIDS.

In this context, UNODC ROMENA in close coordination with the UNAIDS Country Office, the WHO Country Office and the National AIDS Programme of the Ministry of Health and Population conducted a three days training workshop to the outreach staff of Non Governmental Organizations (NGOs) and key staff of National Voluntary Counselling and Testing(VCT) Centers of the Ministry of Health and Population. The training covered differenet subjects including HIV testing and counseling, delivering HIV prevention, treatment and care services to hard to reach population using different outreach methods and communication chanels; ways of communication between staff of governmental VCTs and NGO to enable smooth field work and create better networks among them.

UNODC trained 24 participants in that training which include 12 from NGOs and 12 from the national VCT centers. The training very well acknowledged by both participants and national authorities and would greatly facilitate the implementation of UNODC field activities planned under the UNAIDS Country Envelope in Egypt.

Thanks to the generous contribution of the Joint United Nations Programme on HIV/AIDS (UNAIDS).