Links between Security Sector Reform and advancement of women, welfare of children, and lasting peace highlighted at UNODC event 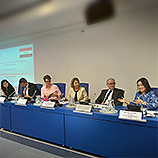 In the context of the upcoming second decade review of the United Nations Security Council Resolution 1325(2000) on women, peace and security, the United Nations Office on Drugs and Crime (UNODC), jointly with Iraq and France, organized a side-event on "Security Sector Reform: women, children, peace and security in Iraq post Da'esh," during the 28th Session of the Commission on Crime Prevention and Criminal Justice.

The objective of the event was to highlight the correlation between Security Sector Reform with women, peace and security agendas, recognizing the fact that ineffective and unaccountable security institutions do not facilitate early recovery in the aftermath of conflict, do not prevent political instability and can be a major obstacle to addressing poverty, gender abuse, human rights, good governance, sustainable peace building and long-term development, as also affirmed by the UN Security Council Resolution 2151(2014) on Security Sector Reform (SSR). In this context Iraq shared its experience with a special focus on women and children, the most vulnerable segments of the society.

The event concluded that addressing security challenges with an integrated and inclusive approach is essential for building efficient, accountable and participatory institutions as well as for promoting peace. In parallel, the involvement of all sectors of society, in particular civil society, is a pre-condition to a successful way forward. Linking Security Sector Reform and the women, peace and security agenda is therefore an important acknowledgement in this regard.

Suzan Aref, Director of the Women Empowerment Organization and Coordinator of Iraq Cross Sector Task Force on UNSCR 1325, with regard to the National Action Plan (NAP), developed to fulfil the UNSCR 1325 for Iraq, said: "The NAP has facilitated the development and maintenance of an open dialogue about the links between violence against women, peace and security, and sustainable development among decision and policy makers, security sector, legislators and civil society." And she emphasized that "it is important to consider linking and reflecting SSR in the development of a second NAP."

General Major Saad Maan, of the Ministry of Interior of Iraq, provided insights on ways and mechanisms used by the ISIS Terrorist Organization to recruit children as well as on the efforts implemented by the national government in response, concluding with stressing that "children are the future progress of society."

Jean-Louis Falconi, Permanent Representative of France to the UN in Vienna, reiterated the highest-level commitment of France and active role played by his country in advancing the agenda of women, peace and security, considered a priority of the political agenda.

In conclusion Miwa Kato, Director of UNODC's Division for Operations, emphasized UNODC's corporate commitment to empower women in the peace process and the criminal justice response to terrorism offences, supporting national reforms, with the support of international partners. She added that she was "pleased to inform that UNODC recently took the first steps to re-establishing our strong partnership and presence in Iraq, with the deployment of a Senior Programme Coordinator and Head of Office in Baghdad."