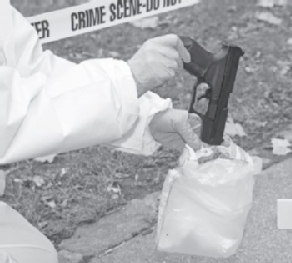 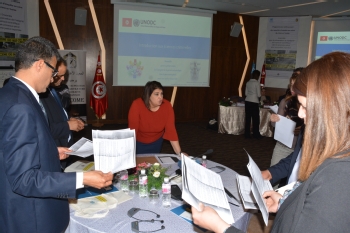 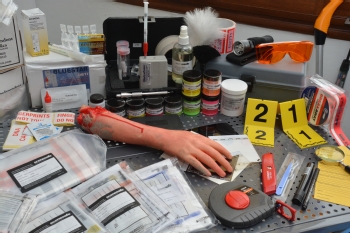 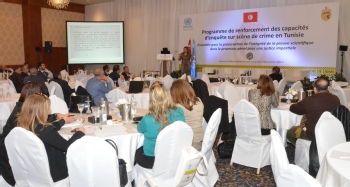 Worldwide, forensic sciences are a cornerstone of criminal justice investigations used by all modern law enforcement and justice services to solve all types of crime and bring justice to victims. Through forensic science expertise, services and evidence chain of custody the smallest piece of evidence can provide invaluable information and bring solid evidence to court. Forensic sciences provide extremely efficient ways to accelerate crime-solving by building cases on physical evidence rather than only on confession and testimony. Forensic analysis can help create linkages with other investigations, which can help in identifying, within short time frames, criminal networks of transnational and international organized crime, human trafficking and migrant smuggling, and illicit trafficking.

Aiming to effectively utilize the power of forensics to support Member States in criminal justice reform, UNODC has been working with the Tunisian government in implementing the "Strengthening Tunisian crime scene investigation services" programme since 2016. As part of the programme, UNODC developed a Training-of-Trainers sub-programme, approved by National Counterparts, on Crime Scene Investigation Management between 8 October and 14 December 2018 at the National Police Training Academy of Salammbô, Carthage. The training programme targeted three groups with three adapted curricula:

In criminal and legal processes, the chain of custody ensures the integrity of the evidence presented in court. Forensic evidence chain of custody refers to the entire history of the evidence, which could be any artefacts (documents, DNA, fingerprints, photographs, firearms, drugs, etc), including its detailed chronological record of how it was collected/seized, taken into custody, documented, analyzed, transferred, stored, assessed and disposed of.

Each piece of evidence brought to court must have the integrity of its chain of custody verified to be admissible. This process aims to guarantee that evidence has not been distorted, planted, or misrepresented. If the wrong person accesses the information, takes too long to transfer it, mislabels it, or accidentally tampers with it in any way, vital evidence could be deemed inadmissible. This is the reason why proper chain of custody is key to a high quality, just and impartial justice system.

A short documentary has been developed to reflect a white crime scene simulation, fully scaled and as close as possible to reality, where the trainees from each group had to apply their acquired knowledge, role and responsibilities, depending on their training group.

Following the overall success of the training, with 38 new trainers, UNODC organized the programme's closing ceremony on the 21 January 2019 at the Police Academy. The event took place with the honorary presence of high-level Tunisian Officials from the Ministry of Interior, the Ministry of Health, UNODC and the International Community. As well as field experts such as Professor Pierre Margot, former Director of the Forensic School of Lausanne (Switzerland), Doctor Moncef Hamdoun, Head of the Forensic Medicine Service in the Tunisian Ministry of Health, M. Ali Guiga, chargé de mission to the Ministry of Justice, and M. Lasaad Ben Lazreg, Director of the National Police Academy.

During the ceremony a "Recommendation Guide on crime scene management and forensic evidence chain of custody," was introduced by a Technical Committee composed of 45 representatives of the Ministry of Interior, Ministry of Justice, Ministry of Health and UNODC. The Recommendation Guide compiles proposed legislative texts, standard operating procedures, guidelines, and field tools (logbooks and forms).

On 27, 28 and 29 March 2019, two additional successful workshops were organized in Tabarka, Tunisia, in close collaboration with the "Institut Supérieur de Magistrature" of Tunisia, for 64 Tunisian magistrates. Through interactive sessions, practical examples and exercises, the trainings focused on the importance of crime scene and forensic evidence preservation and appropriate management along the chain of custody. The trainings were based based on standard operating procedure in accordance with international standards and best practices, and on related relevant legislation.

The trainings also included brainstorming sessions and discussions around the gaps and proposed legislation regarding crime scene and forensic evidence preservation and management. Those successful workshops took place with the honorary presence of M. Chokri Mejri President of the Appeal Court of Jendouba Gouvernorate and M. Ahmed Yahyaoui the General director of the Institut Supérieur de Magistrature. The proposed legislative texts were presented by the Tunisian Legislative Reform Commission in April 2019 to the Tunisian Government.

Those events represent the successful achievements of the first phase of the UNODC program on "Strengthening Tunisian crime scene investigation services", which were possible thanks to the excellent collaboration and cooperation of the Ministry of Interior, the Ministry of Justice and the Ministry of Health of Tunisia, and their representatives

This program was possible thanks to the generous contribution of the Bureau of International Narcotics and Law Enforcement Affairs INL-USA.