A vital pillar in the justice and security system, the sole forensic science laboratory in the West Bank seeks justice for survivors of violence. UNODC through the HAYA Joint Programme, is training laboratory technicians to help increase the likelihood of identifying perpetrators of violence and holding them accountable. 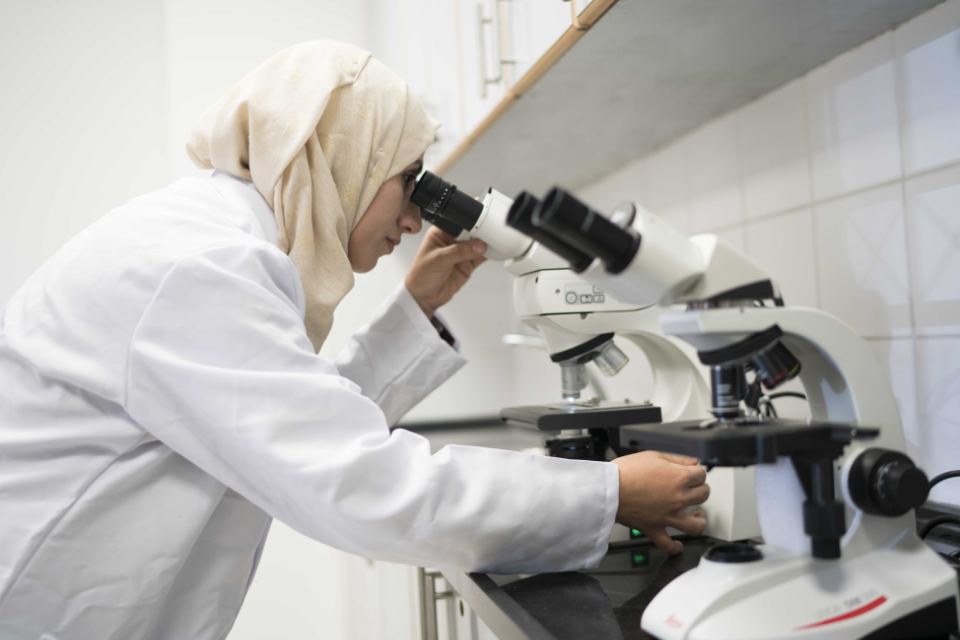 Violence, especially against women and girls, is a worldwide systematic human rights violation that has only increased since the COVID-19 pandemic. Globally, 243 million women and girls aged 15 to 49 have suffered sexual and/or physical violence by an intimate partner in the last year.  In the West Bank and Gaza Strip, one in three women experienced violence by their husbands, and 44 percent of girls aged 12 to 17 years old have been subjected to physical violence, according to a study by the Central Bureau of Statistics.

The United Nations Office on Drugs and Crime (UNODC) through the HAYA Joint Programme is seeking to change these statistics through forensic science. Funded by the Government of Canada and jointly implemented by UN Women, UNFPA, UN-Habitat, and UNODC, the HAYA Joint Programme seeks to eliminate violence against women and girls in the West Bank and Gaza Strip.

In this context, UNODC is working with justice institutions to enhance forensic capacity when investigating cases of violence and improve forensic services to its survivors.

Investigative teams in different governorates throughout the West Bank collect, classify, preserve, and then transfer evidence to the Palestinian forensic science laboratory. Launched in 2016, the lab uses modern technology and science in criminal investigations to impartially examine evidence collected from crime scenes or bodies of violence survivors. This evidence is then presented to courts to establish the crime and help identify the perpetrator. As the only forensic science laboratory in the West Bank, its work will be crucial in criminal cases, such as sexual assaults or homicides.

All forensic lab staff are members of the Palestinian Police, which is part of the Ministry of Interior. The lab works together with the investigative departments, the Public Prosecution, and the courts in pursuit of justice.

In the case of one woman killed in a shooting incident between her family and the Palestinian police, the forensic lab proved the bullet originated from a gun belonging to a family member, allowing the perpetrators to be caught and justice be found for the victim. Rawan says this is just one example of many stories demonstrating how important the lab’s work is. “Without the forensic lab, all cases against perpetrators of violence would be dropped,” says Rawan. “They would escape punishment, and the rights of the survivors would be lost.”

Since 2019, the UNODC, through the HAYA Joint Programme, has supervised the establishment of a forensic biological examinations section within the forensic science lab. Through specialized training started in July 2020, its forensic science laboratory experts are now better skilled in biological evidence examinations and formulating opinion evidence for the justice sector. Twenty-five Palestinian police first responders and crime scene and family protection officers were also trained in forensic evidence handling and management.

The training will continue in 2021, and Rawan says it has helped her and the other four forensic science laboratory experts at the lab to utilize its equipment and properly preserve biological evidence. This will serve to further enhance the capacity of the Palestinian police and judiciary to hold perpetrators of sexual and gender-based violence crimes in the West Bank to account. “The training has helped us be able to support survivors of violence, including women and children, and investigate cases with biological aspects to get justice for them,” says Rawan.

For Rawan, violence will end when the prevalent social norms preserve human dignity and respect human rights without discrimination. Ending violence is not merely a group effort, but also an individual one, explains Rawan and what motivates her in her work. “Individual efforts can be used as a tool for collective change, to push for legal and constitutional amendments to ensure safety, security, and self-determination for society.” Rawan’s hope for the future is one where there are no more cases of violence in her country and around the world.