GLO.ACT supports counterparts in Iraq to review national legislation on Trafficking in Persons 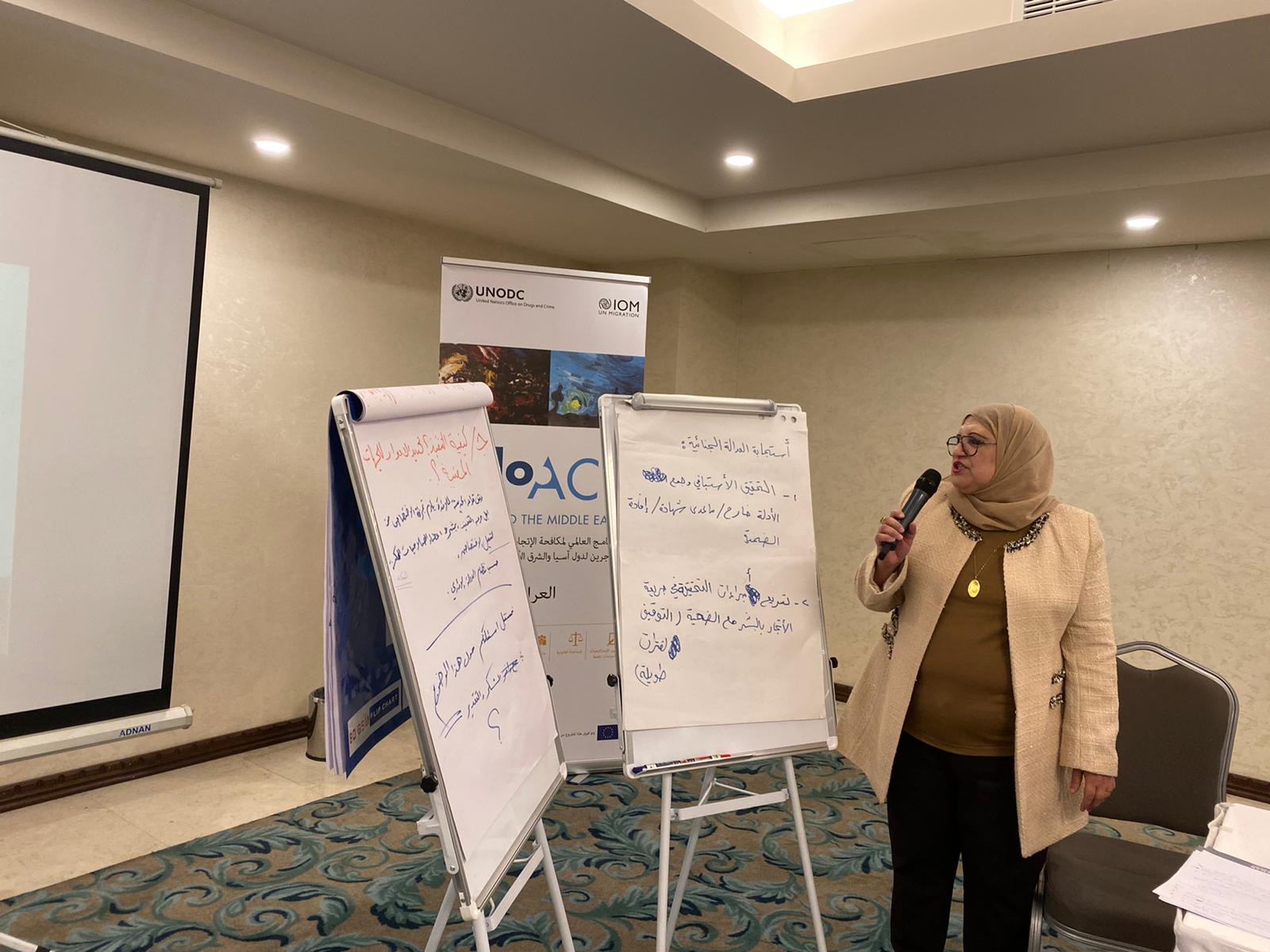 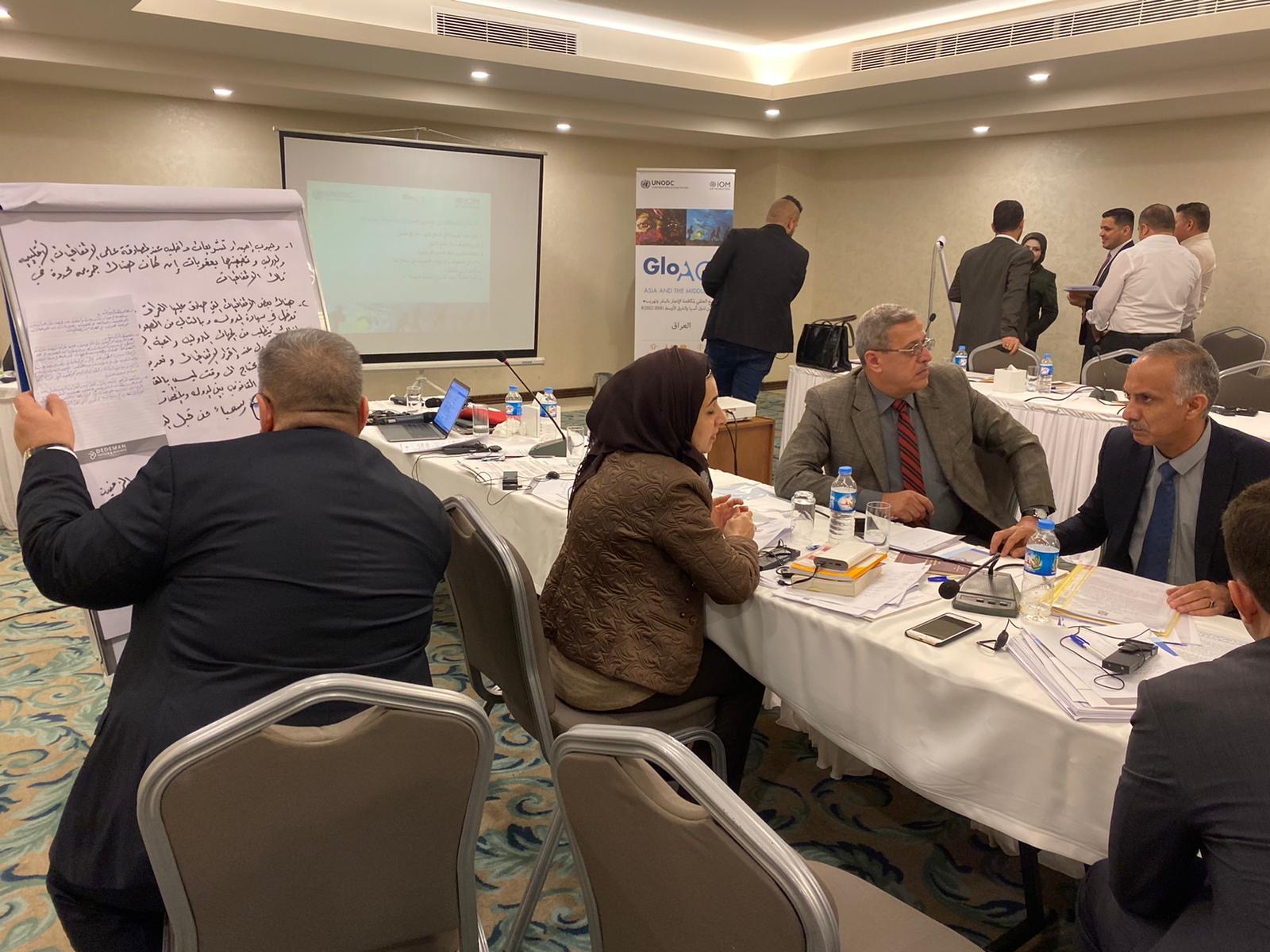 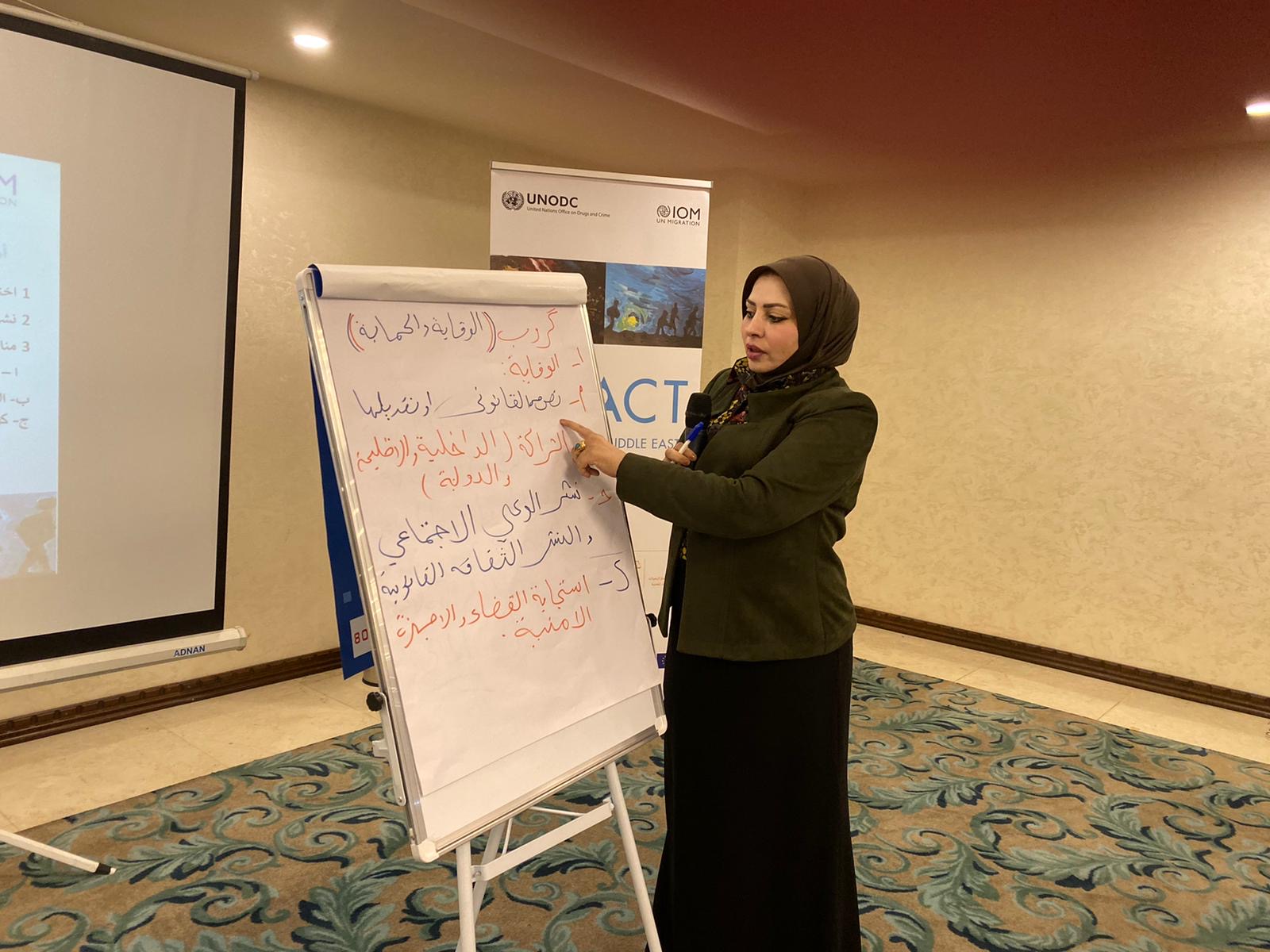 Erbil, Iraq - UNODC, under the framework of the Global Action against Trafficking In Persons and the Smuggling of Migrant ( GLO.ACT Asia and the Middle East ) conducted a two-day workshop from 16 to 17 December on the implementation of national legislation to prevent and combat trafficking in persons in accordance with the UN Trafficking in Persons Protocol, in Erbil, Iraq. The workshop brought together 30 participants (25 male/5 female), including members of the Central Committee on Combatting Human Trafficking and Relevant Authorities (CCCHT) and representatives from the Kurdistan Regional Government of Iraq (KRG), and members from the KRG Committee against TIP.

This is largely attributed to the existence of human trafficking gangs operating in these provinces, which primarily exploit children, particularly girls. Budgetary commitments, conflict and significant reconstruction projects following more than 15 years of armed conflict have left the Iraqi Government with limited resources with which to combat human trafficking. Likewise, funding for KRG anti-trafficking efforts is limited.

Nevertheless, the Government of Iraq responded to Trafficking in Persons (TIP) enacting Law No. 28 of 2012 Combating Trafficking in Persons (CTP) on 23 April 2012. The Law is modelled on the UN Trafficking Protocol. The CTP criminalizes human trafficking and satisfies many, but not all of the requirements of the Protocol. In particular, it fails to exclude the need to prove means in the case of the trafficking of children. It also does not incorporate provisions protecting victims from prosecution and punishment for crimes they commit as a result of being trafficked.

The aim of the workshop therefore was to develop a common understanding about the existing gaps, consider how provisions for protection could be incorporated and how cooperation in general can be strengthened at national, regional and international level.

Opening the workshop, Ali Elbereir, Senior Programme Coordinator, Head of Office Iraq, welcomed participants saying that, "Having counter trafficking offices in all the Iraqi governorates is an important step in the right direction". He continued by saying," The government plays an important role in defeating the challenges posed by organized crime."

During the workshop, Eurídice Márquez, GLO.ACT Project Management Officer and Martin Reeve, GLO.ACT Regional Advisor, presented on national, regional and international patterns and trends of TIP and Smuggling of Migrants (SOM) before passing the floor to Aimée Comrie, GLO.ACT Project Coordinator, who spoke about the provisions of the UN Trafficking in Persons Protocol. The relevant national legal framework was then presented by the State Council Representative and member of the Central Committee against TIP, Wedad Al Qaisy and Judge Ahmed Rekani from the KRG Ministry of Justice, providing an excellent opportunity for constructive debates and discussions. The presentations were followed by a practical exercise where several case studies were examined and discussed among the participants.

On the second day of the workshop, in-depth discussions were carried out by the participants, with inputs from Diyar Mzuri, IOM National Community Policing Officer and Ms. Comrie on the main challenges related to the application of the national legislation, especially with respect to protection and assistance measures, bilateral, regional and international cooperation, and criminal justice responses by and large.

Following the workshop, representatives from the central government and KRG, reiterated their commitment to strengthen cooperation and national coordination mechanisms. They also stressed that UNODC-led activities, that bring together a varied representation nationwide, are widely beneficial in facilitating information exchange and cooperation modalities.

The Global Action against Trafficking in Persons and the Smuggling of Migrants - Asia and the Middle East (GLO.ACT Asia and the Middle East) is a four-year (2018-2022), €12 million joint initiative by the European Union (EU) and the United Nations Office on Drugs and Crime (UNODC) being implemented in partnership with the International Organization for Migration (IOM) in four countries: Islamic Republic of Afghanistan, Islamic Republic of Iran, Republic of Iraq and Islamic Republic of Pakistan.The project builds on a global community of practice set in motion in GLO.ACT 2015-2019 and assists governmental authorities and civil society organizations in targeted, innovative and demand-driven interventions: sustaining effective strategy and policy development, legislative review and harmonization, capability development, and regional and trans-regional cooperation. The project also provides direct assistance to victims of human trafficking and vulnerable migrants through the strengthening of identification, referral, and protection mechanisms.