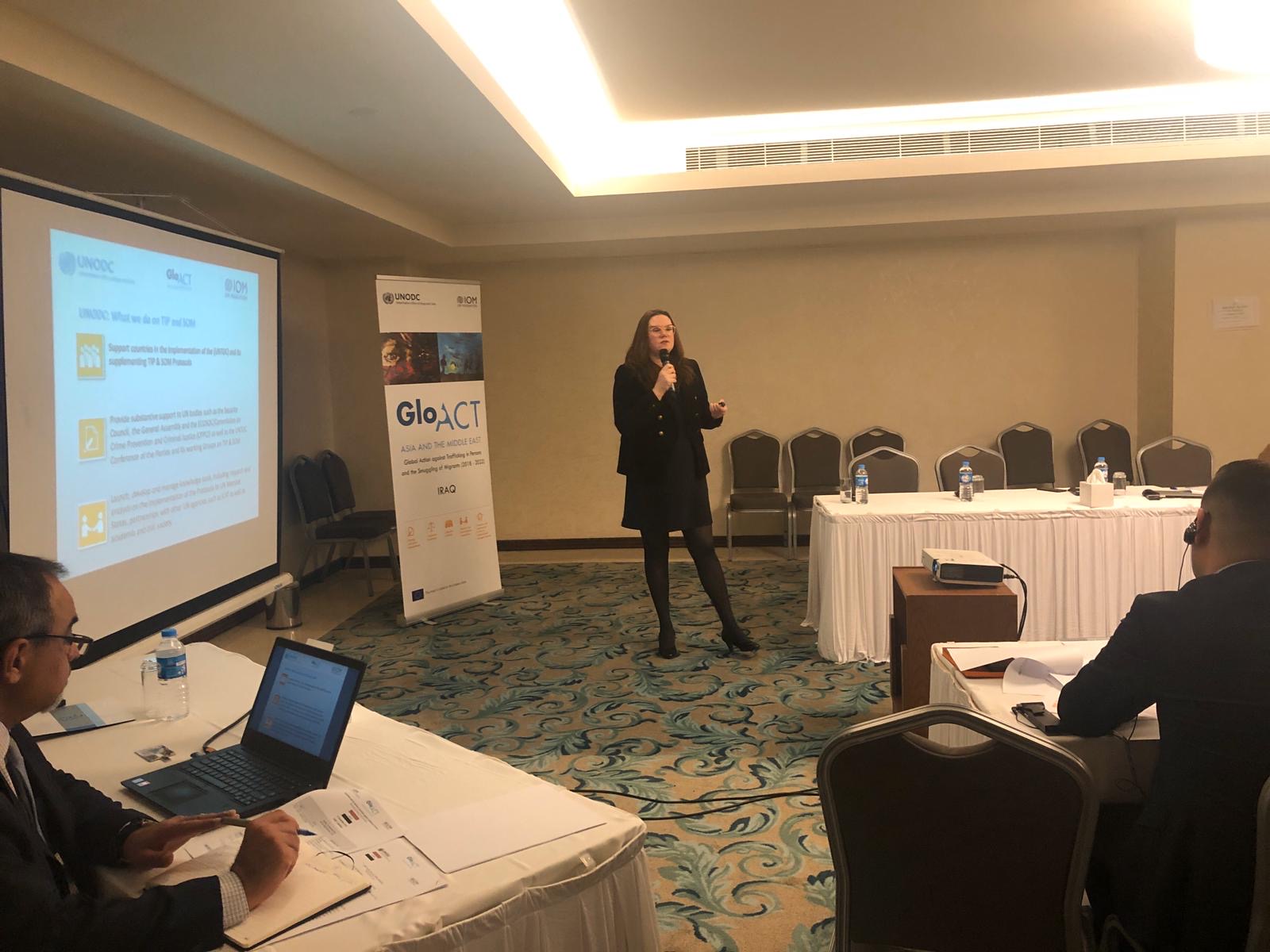 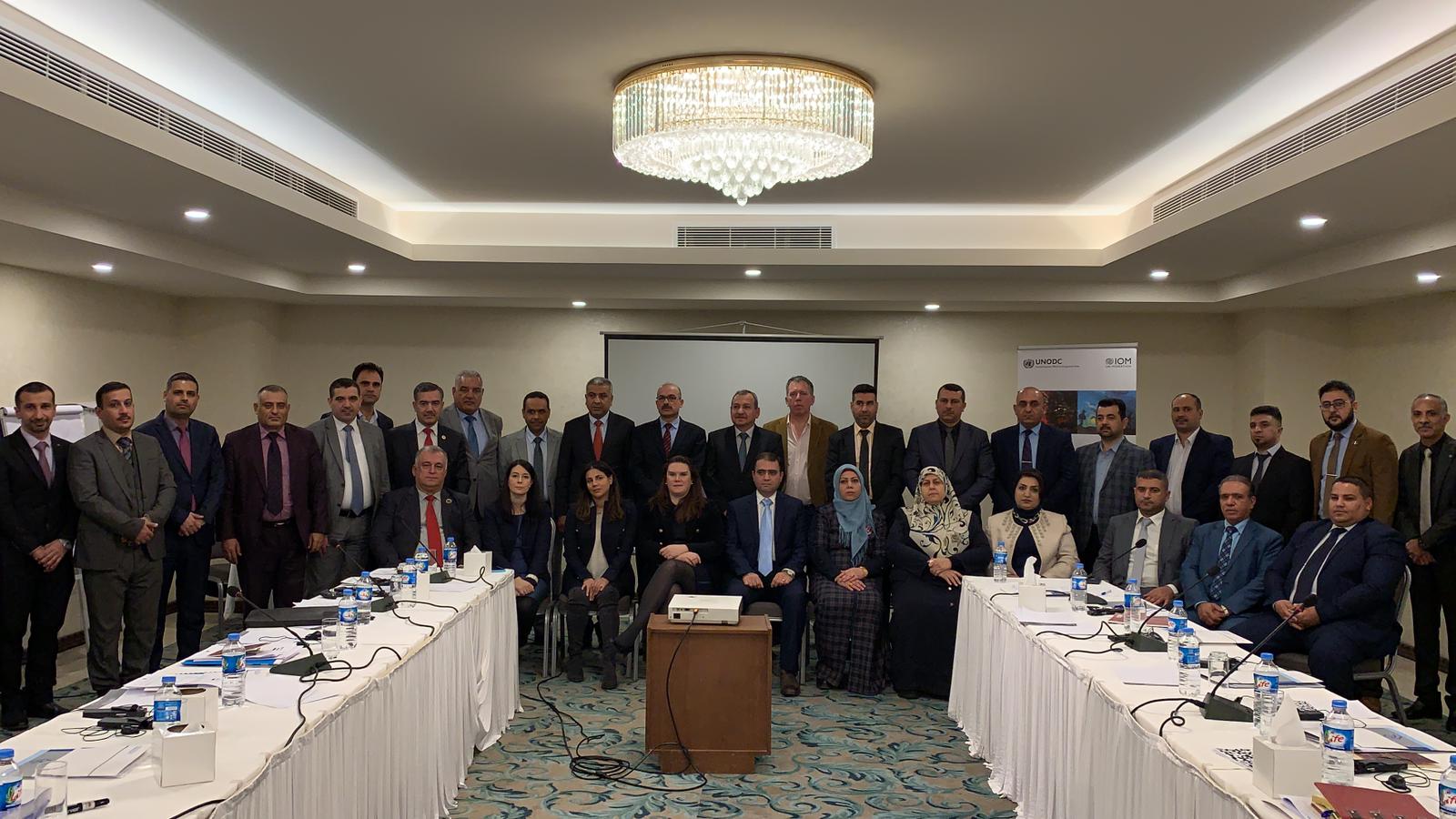 On 15 December 2019 UNODC, under the framework of the Global Action against Trafficking in Persons and the Smuggling of Migrant ( GLO.ACT Asia and the Middle East), organized a roundtable with the members of the Central Committee on Combatting Human Trafficking and relevant authorities (CCCHT) to officially commence project implementation in the country.

The aim of the roundtable was to:

Following a welcome by Ali Elbereir, Senior Programme Coordinator, Head of Office Iraq, Aimée Comrie, GLO.ACT Asia and the Middle East Project Coordinator gave an overview of the project, its approach and objectives. UNODC and IOM colleagues then proceeded to outline all five of the project objectives and gave detailed presentations of activities planned for implementation under each outcome. It is important to note, that the three-year workplan presented was designed on the basis of various consultative missions that were conducted as part of the project inception phase in Iraq as well as the assessment report on TIP and SOM in Iraq. After each outcome and its activities were presented the floor was opened to collect participants' inputs to review and adjust the workplan were needed, prior to its validation by the Iraqi authorities.

In response to the presentation of the workplan, Ministry of Interior representative General Mohammed Zamil Kadhim emphasized, among other aspects, the need to strengthen bilateral, regional and international cooperation to prevent trafficking and strengthen prosecutions. While Ahmed Khalifa Mezel, representative of the Supreme Judicial Council mentioned that focusing on the victims of trafficking during investigations is becoming increasingly prioritized within the council. All participants agreed that there is a need to raise awareness on Trafficking in Persons (TIP) and to distinguish TIP from other forms of organized crime. CCCHT members also mentioned the need to initiate specialized training for Iraqi law enforcement and investigating officers on counter trafficking based on a victim-centred approach.

Overall, the meeting helped familiarize members of the CCCHT with GLO.ACT Asia and the Middle East and allowed their inclusion in the design of foreseen activities under the project, strengthening thereof the project's strong emphasis on the importance of the counterparts' ownership of the project. The meeting was crucial in that it marked the commencement of the implementation of GLO.ACT Asia and the Middle East in Iraq, ensured the involvement and engagements of key counterparts and advanced the validation of the project workplan.

GLO.ACT Asia and the Middle East is in the early stages of establishing a women's network to promote and foster the role of women professionals in the response to TIP and SOM in partner countries. The initiative was announced on Brussels on 10 December at an all-female high-level panel which GLO.ACT Asia and the Middle East convened at the EU Parliament addressing conflict-related sexual exploitation. Thus, on the margins of the roundtable meeting, an informal dinner was organized with female representatives from both the central government and KRG, including female members of the Central Committee against TIP in addition to female Judges from the KRG, and from the KRG High Council of Women's Affairs as well as NGOs. The initiative which aims to strengthen the project's gender dimension, promoting women's role in national efforts to prevent and combat TIP, in view of eventually establishing a network of competent female officials on both a national and regional was then presented to the invitees. The women present also shared their rich experiences and all the obstacles women have faced for better gender-equality as well victories achieved so far in this respect. They all agreed that serious efforts were necessary to bring about real change and offer an improved status and role for women in general in this area. The representatives were very supportive of the initiative and reiterated their willingness to cooperate further as the concept of the GLO.ACT's women's network develops and further expands.