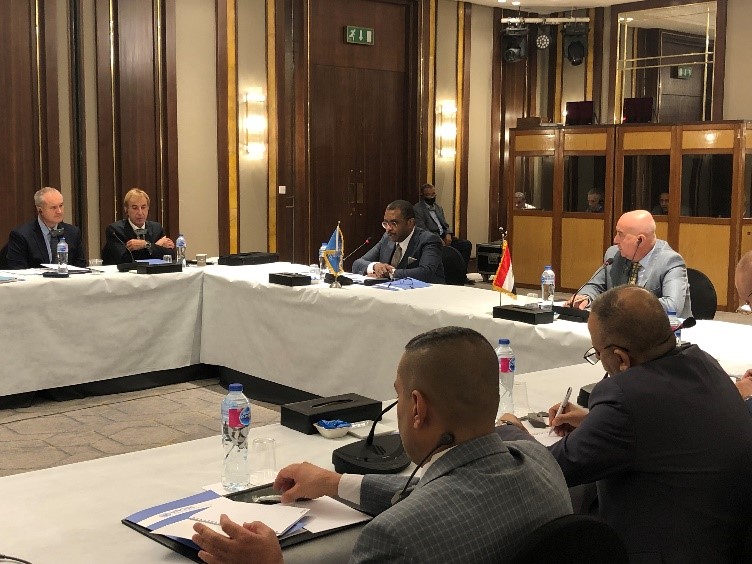 The use of traditional investigative methods to combat illicit drug trafficking has proved to be ineffective as it usually leads to arresting only the drug dealers, not the drug lords and their networks. Hence, employment of the specialized investigative tools is inevitable to counter the ever-growing threat of transnational organized criminal groups.

With generous support from the US Bureau of International Narcotics and Law Enforcement Affairs (INL), UNODC is implementing a project titled “Strengthening the Capacities of Iraqi law Enforcement and Criminal Investigation Services.” As part of this project, UNODC, in close coordination and cooperation with the Governments of Iraq, France and U.S.A, delivered training to 15 senior Investigator Officers from the Anti-narcotics and Anti-Crime directorates at the Iraqi Ministry of Interior on “Surveillance and Investigative Skills,” which is a cornerstone element of the specialized investigation techniques.

During the 4-day training, the Iraqi officials gained a thorough understanding of the differences between the classic and the specialized investigation techniques as well as the limitation of the classical investigation approach through exposure to real cases from the U.S. and France. The Head of the Iraqi delegation highlighted the similarities and the common aspects with the Iraqi experience.

The training highlighted the observation technique of the Hand-to-Hand Street Deals and the conduct of simple physical surveillance of suspect drug dealers. Furthermore, the training shed light on the efficiency and limitations of these approaches as it is tedious and is not the most efficient use of resources mostly not leading to the arrest of the drug lords. Alternatively, the use of informants and undercover operations are an essential investigative tool in drug cases as also in any other area of law enforcement.

Participants and experts exchanged information and experiences such as on the difficulties and challenges faced in the field, real cases, how these techniques were applied in their contexts as well as the use of information obtained for the judiciary proceedings in accordance with the domestic laws and legislations.

During the opening ceremony, Mr. Al-Qaysi, the Head of the Iraqi delegation, underlined the efforts exerted by the Government of Iraq to tackle illicit drug trafficking including the enacting of law (#50/2017), the hotline to receive drugs crimes-related information from the citizens as well as the Ministry’s awareness-raising campaign.

Mr. Patrick Laberche, the Police Attaché at the French Embassy in Baghdad highlighted that “International cooperation in the form of assistance is inevitable and it could take the form of joint training of concerned personnel, sending experts to transfer skills, etc.” This assistance can be rendered more effective by the origin, transit and destination countries affected by illicit drugs trafficking.

Mr. Al-Qaysi concluded by expressing the willingness of the Government of Iraq to cooperate with international organizations to counter transnational drugs trafficking.