Indonesia now a manufacturing centre and destination point for trafficking of amphetamine-type stimulants (ATS); crystal meth accounts for 62% of all drug-related arrests 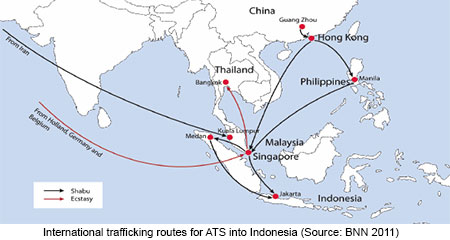 Jakarta (Indonesia), 20 February 2013 - The manufacture, trafficking and use of crystalline methamphetamine is now the greatest drug threat to Indonesia, according to a jointly-published report released today by the National Narcotics Board of Indonesia (BNN) and the UN Office on Drugs and Crime (UNODC) Global Synthetics Monitoring: Analyses, Reporting and Trends (SMART) Programme.

Crystalline methamphetamine seizures rose 79 per cent in 2011 to 1,161 kg from the 649 kg seized in 2010, the report says, noting that while cannabis remains the most widely used illicit drug in Indonesia, crystalline methamphetamine use has expanded continually during the past several years, particularly among laborers, students and sex workers. Ecstasy, popular with Indonesian young adults, continues to be the third most widely used illicit drug in Indonesia.

"The expansion of the ATS trade and the high profits it generates - and the increasing involvement of transnational organized criminal groups in this trade - pose a considerable threat to the security, health and the welfare of the Indonesian population," said Mr. Boonwaat.

The report highlights the latest trends and emerging concerns related to ATS in Indonesia, with the aim of gaining a more comprehensive understanding of the crystalline methamphetamine and ecstasy situation in Indonesia.

Of the estimated 3.7 to 4.7 million people who use drugs in Indonesia in 2011, one in three (about 1.2 million) used crystalline methamphetamine and one in five (some 950,000) used ecstasy during the year. 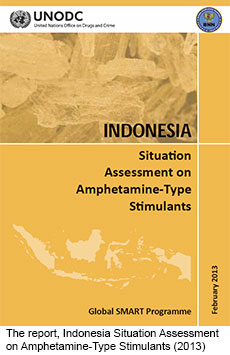 At present, most of the ATS used in Indonesia is supplied by domestic manufacture, with remaining quantities continuing to be trafficked into Indonesia by transnational criminal networks. As ATS use expands across the archipelago, the threat of ATS manufacturers relocating operations close to emerging ATS markets in considerable.

The large number of potential users of ATS and the high prices of ATS in Indonesia relative to other countries in South-East Asia continue to attract international drug trafficking networks to smuggle large quantities of ATS into Indonesia.

"Knowing is the first step in responding," said Mr. Boonwaat, "To formulate a strategic response to the ATS problem we need knowledge; a framework of laws; the technical capacity to respond; and regional cooperation among law enforcement. Law enforcement and public health officials must form a network to respond effectively to the network of transnational organized criminals operating in our region."

UNODC launched the Global SMART Programme in September 2008. The objective of the Programme is to enhance the capacity of Member States and relevant authorities to generate, manage, analyze, report and use synthetic drug information, in order to design effective, scientifically-sound and evidence based policies and programmes. The UNODC Global SMART Programme receives financial support from the Governments of Australia, Canada, Japan, New Zealand, the Republic of Korea, Thailand, the United Kingdom and the United States.