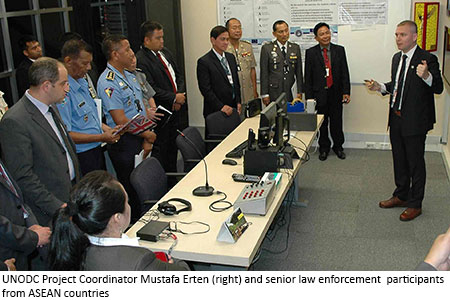 Semarang (Indonesia), 1 November 2013 - High-level representatives from ASEAN countries gathered on 17th October at the Jakarta Centre for Law Enforcement Cooperation (JCLEC) for a two-day conference focusing on the use of modern training technologies in law enforcement.

According to World Internet Stats (June 2012) there are 2.4 billion internet users across the world - 44 per cent of whom are based in Asia.

Recognising these opportunities UNODC has designed and developed goLEARN, a new learning management system to deliver both off-line and now on-line training, that it introduced and demonstrated to ASEAN countries during the JCLEC conference. goLEARN forms part of a suite of UNODC 'go' - government office - software tools available to Member States.

JCLEC is the first Centre in the world to receive the new eLearning platform. It had previously successfully delivered an older version of the UNODC software for several years. goLEARN builds on and enhances earlier versions of UNODC multimedia training material and will be rolled out across Asia in the coming months, introducing new modules in fields such as Smuggling of Migrants and Wildlife Crime.

The conference was held under the framework of the UNODC-JCLEC Criminal Justice Project (IDNT80) funded by the European Union and the Government of Turkey, and supported by the UNODC Global eLearning Programme.