Regional dialogue to strengthen protection of transportation against terrorism 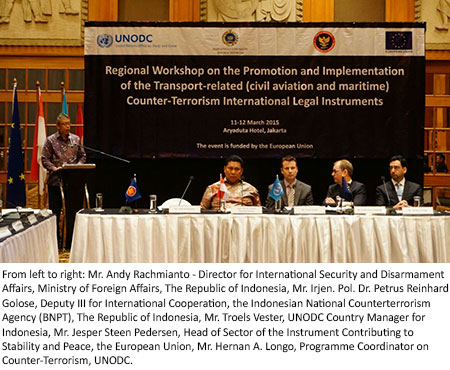 Jakarta (Indonesia), 24 March 2015 - More than fifty senior officials from eight ASEAN countries attended the "Regional Workshop on the Promotion and Implementation of the Transport-related Counter-Terrorism International Legal Instruments" in Jakarta during 11-12 March.

The workshop was co-hosted with the Indonesian National Counter-Terrorism Agency (BNPT) and the Indonesia Ministry of Foreign Affairs with support from the European Union (EU). The aim was to highlight the importance of effective measures to protect civil and maritime transportation from terrorist threats, in line with UN conventions and protocols.

In his opening speech, Inspector General, Pol. Dr. Petrus Reinhard Golose, Deputy for International Cooperation of BNPT stated that "This workshop provides an opportunity to enhance cooperation in Southeast Asia in line with the spirit and provisions of the ASEAN Convention on Counter Terrorism (ACCT)." Multiple participants at the conference including the ASEAN Secretariat , representatives from APEC, SEARCCT, MIMA, and the Governments of Japan, The Netherlands, and Australia, allowed increased regional cooperation and strengthened existing normative frameworks.

Illegal acts against aircrafts and ships are serious threats to global security and development, illustrated by the fact that 12 of the 19 international legal instruments related to the prevention and suppression of terrorism address violent acts against civil aviation and maritime navigation. 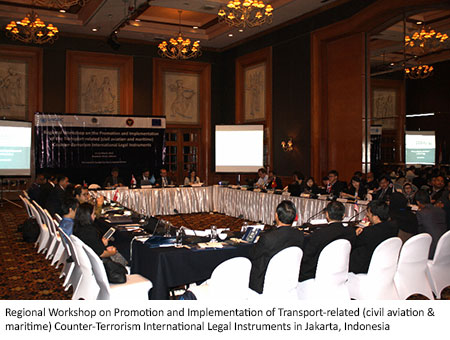 Mr. Troels Vester, Country Manager for the United Nations Office on Drugs and Crime (UNODC) in Indonesia, highlighted the relevance for Southeast Asia, "As the region's geography and ongoing progress towards regional integration make it especially vulnerable to these type of terrorist threats."

The UN legal instruments reviewed during the workshop covered good-practices to criminalise terorrist offences against civil aviation and maritime transportation under domestic laws; exercise jusrisdiction over offenders; establish conditions to prosecute or extradite; and set up mechanisms for enhancing cooperation in criminal matters.

"The EU has recognised the interconnectedness of aviation security and has launched several actions aimed at enhancing the capacity of partner countries to meet these standards." Said Mr. Jesper Steen Pedersen, Head of Section for Instrument contribution to Stability and Peace, Directorate-General for International Cooperation and Development of the European Commission.