Indonesia has become the largest economy in Southeast Asia and the world's 10th largest economy (in terms of purchasing power parity) due to rapid economic progress over the past twenty years. This progress has been accompanied by an increase in gross national income per capita from US$560 in 2000 to US$3,630 in 2014. A diverse archipelago nation with more than 300 ethnic groups, Indonesia is the world's fourth most populous country and a member of the G-20. 1 At the same time, the country continues to confront enduring threats posed by transnational organized crime, corruption, drug use and terrorism. The United Nations Office on Drugs and Crime (UNODC) response to this complex reality is an integrated approach, which aims at identifying and addressing all aspects of the drugs and crime situation in Indonesia through advocacy in the policy arena, and through technical assistance in the country and the region. This integrated approach is accomplished in coordination with UNODC's Regional Office for Southeast Asia and the Pacific (ROSEAP) in Bangkok, Thailand and Global Programmes in Vienna, Austria.

The partnership between Indonesia and UNODC has evolved since 2007 to become one of the most prominent country programmes for UNODC in Southeast Asia with its focus on corruption, environmental crime, and drug trafficking and use. UNODC's support has evolved towards supporting a country-led and owned policy agenda, consistent with Indonesia's status as a middle-income country.

The UNODC Country Programme (CP) for Indonesia covers the period from 2017 to 2020 and builds on the predecessor CP. It has been designed and developed by consolidating recommendations endorsed at the annual Programme Steering Committee meetings, and through consultations with relevant national institutions, experts, civil society, development partners, donors and other UN agencies in Indonesia. The new CP will ensure that UNODC - through its Programme Office in Indonesia (POIDN) - will continue its partnerships with the Government of Indonesia (GoI) to strenghten capacities in programme focused areas, assist with various policy frameworks and provide accurate data and information to counter the consequences of drugs and crime in the country in line with its national strategies. In its design and implementation, the CP is closely synergized to the Regional Programme for Southeast Asia 2014-2017 (RP) and is complemented by Global Programmes also delivering assistance in Indonesia.

The predecessor CP, 2012-2015 (extended to 2016) served as the first integrated programming tool for UNODC in Indonesia. Through the initial CP, UNODC was able to broaden its support in a sustainable manner, institutionalise its relationships with GoI counterparts through governance arrangements and utilise an effective results-based management system. Through the new CP, UNODC will continue to advance the integrated approach, focus assistance to identified areas, and balance the need to support country challenges and capacity building needs and regional initiatives.

UNODC will implement the CP in partnership with the national counterparts, regional bodies, international partners and other stakeholders. The National Development Planning Agency (BAPPENAS) will remain the GoI focal point, and flexibility will be ensured to accommodate emerging needs through regular formal and informal reviews with national counterparts. The primary vehicle for formal reviews will be the Programme Governance Committee, chaired by BAPPENAS, the Ministry of Foreign Affairs and UNODC. An emphasis will be placed on supporting Indonesia's contribution to partnership mechanisms and frameworks such as the Association of Southeast Asian Nations (ASEAN) and other regional forums, including in the spirit of South-South cooperation. 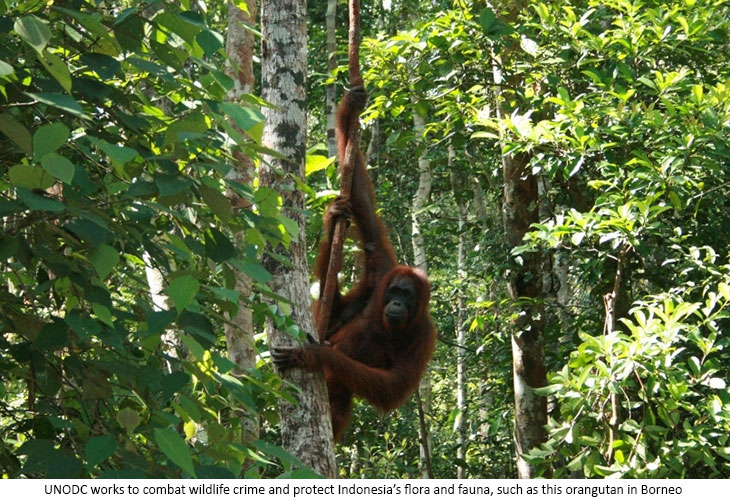 The CP is linked to the Indonesian Government's National Medium Term Development Plan (RPJMN), Phases III and IV. The outcomes of the United Nations Partnership for Development Framework 2016-2020 (UNPDF), jointly signed by the GoI and the United Nations (UN) in Indonesia and which will inform the implementation of UNODC's work. Underpinning the CP also is a focus on supporting the GoI to achieve the 2030 Agenda and related Sustainable Development Goals (SDGs), which the GoI has demonstrated a commitment to making a priority.

This CP outlines the framework for delivering a coherent programme of work and serves three primary objectives:

The proposed programme of work has been developed in close consultation with national partners, and took advantage of the expertise available in ROSEAP and UNODC HQ. This document includes: (i) a situation analysis of the main drugs and crime challenges faced by Indonesia; (ii) a summary of UNODC's work in the country; (iii) the proposed programmatic response relating to the proposed scope and focus of UNODC's support; (iv) Resource requirements and financing; and (v) Programme governance and implementation arrangements.

The vision that this CP aims to contribute to is:

'A safer community, free from the threats posed by organized crime, corruption, terrorism and drug use and a better criminal justice system capable of providing justice to all.'

To support this vision, UNODC's support in the country will be focused on four interdependent sub-programmes which are in line with UNODC's global strategy. The CP is based on the integrated programme approach and aims at delivering outcomes and outputs through sub-programmes rather than through stand-alone projects and initiatives. UNODC's responsibility is to help provide high-quality outputs that support Indonesia to achieve the results of the CP, in line with its own policies and priorities.

Strategic oversight and direction for the CP will be provided by a Programme Steering Committee (PSC), which will be guided by a Technical Working Group (TWG) for each of the four sub-programmes. POIDN will be responsible for coordinating and managing the implementation of the CP in accordance with the annual work plan approved by the PSC and in line with UN administrative rules and regulations. This governance set-up will also function as a clearance house for any global programme that intends to carry out activities in Indonesia. Without PSC approval, no UNODC activities will take place in Indonesia. Also, UNODC will have on-going engagement with key national bodies and partners frameworks that are relevant to UNODC mandates and the scope of work proposed in this CP.

Human rights are at the core of all work of the UN system and - together with peace and security and development - represent one of the three, interlinked and mutually reinforcing, pillars of the United Nations. In Indonesia, UNODC is in the unique position of working across all three pillars in its efforts against crime, drugs, and terrorism. Bearing in mind the centrality of human rights to the aims of the United Nations and to the work of UNODC globally, human rights and gender perspectives are central to the CP.