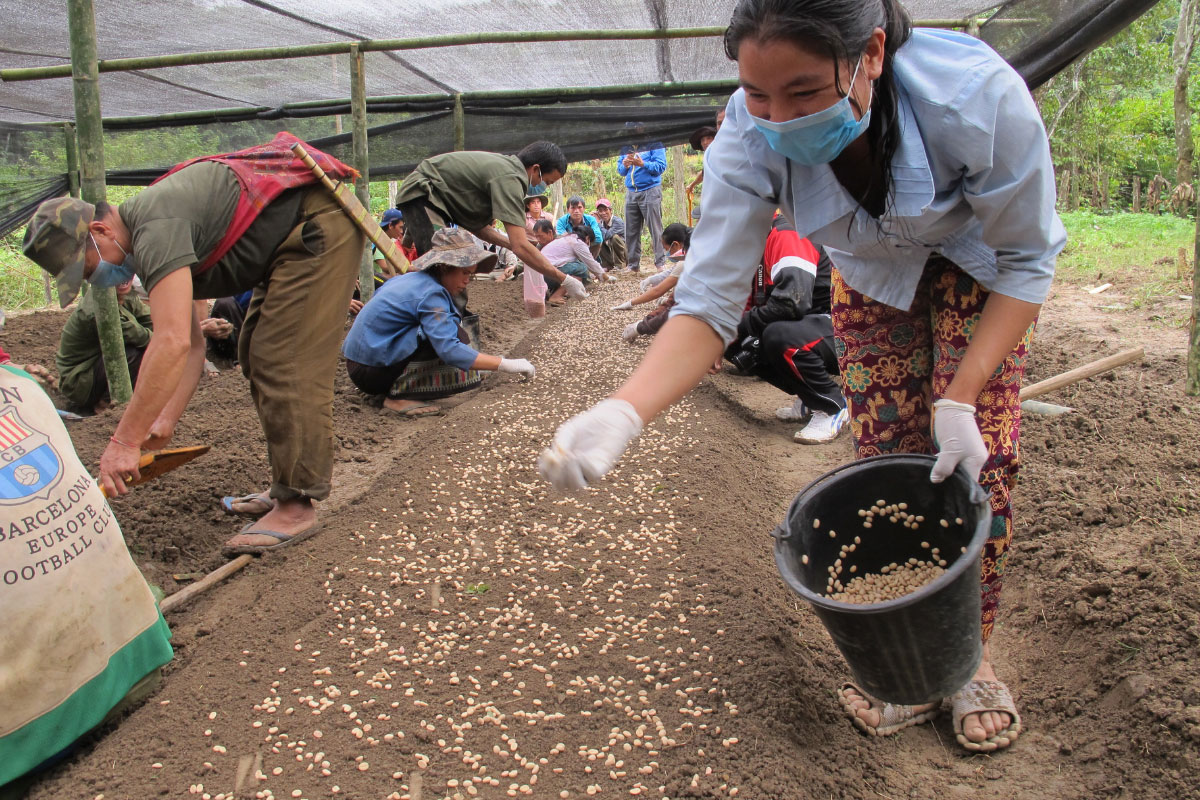 Vientiane, Lao PDR (7 April 2021) - In the remote and mountainous region of northern Laos, local farmers have been growing opium for generations. While opium is a cash-crop and a means to generate income for these communities, the dire consequences of its trade have a global reach.

However, the tides are changing in Huapanh province. A group of former opium farmers have recently embarked on a journey that has opened the doors to a new, bustling and licit international market – the global coffee industry. 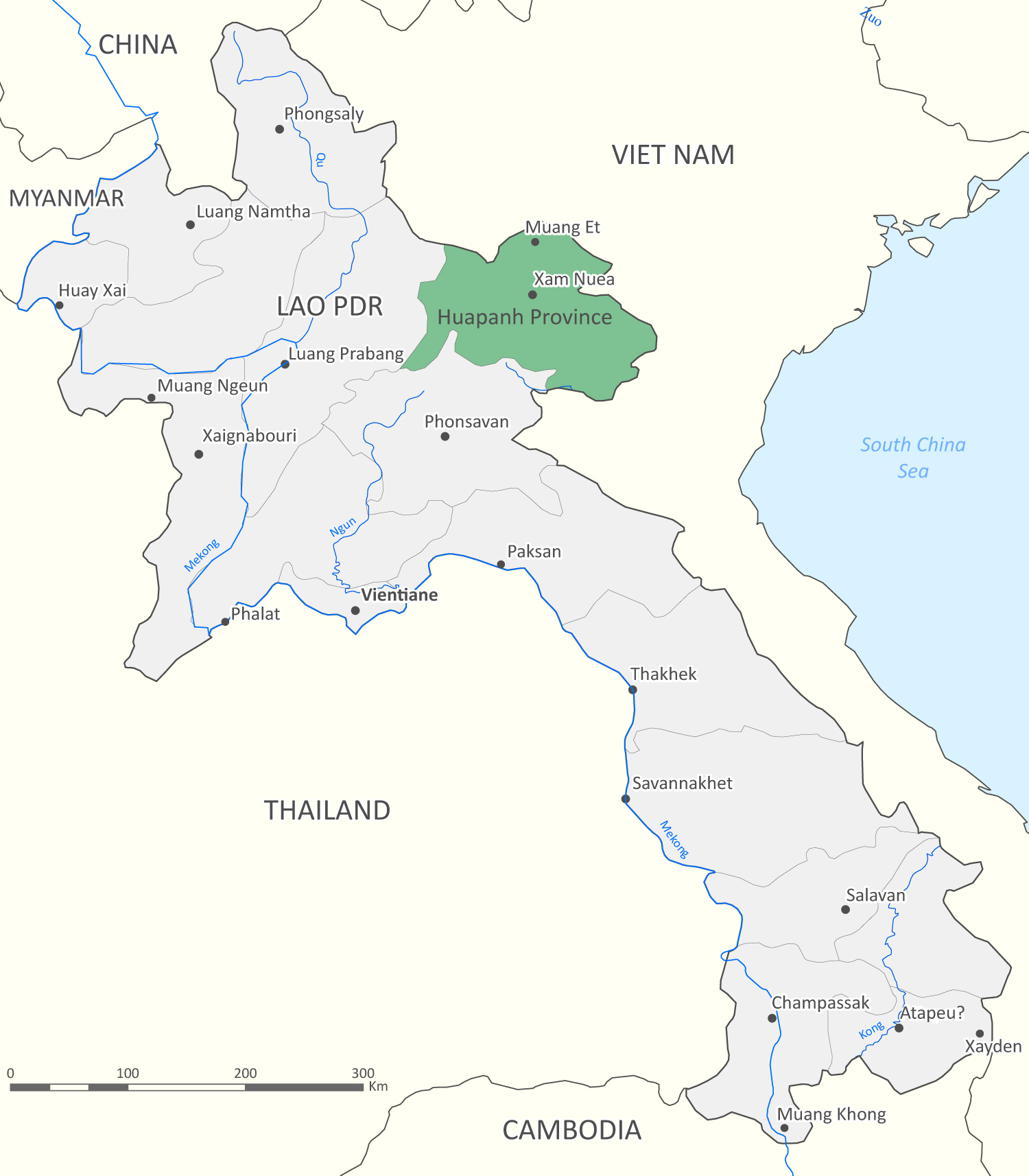 This week, farmers from the Vanmai Coffee Cooperative signed a long-term commercial partnership agreement with the renowned French coffee roaster, Malongo. This agreement secures a ready market for the cooperative’s crop over the next five years, as well as a strong foundation to build a sustainable alternative to the cultivation of opium.

“This agreement shows us that we are on the right track, and gives us hope that coffee can be a real income alternative to opium”, said Mr. Savaythong Khounsavanh, President of the Vanmai Cooperative. “It makes us proud to know that coffee drinkers in France appreciate all our hard work.” 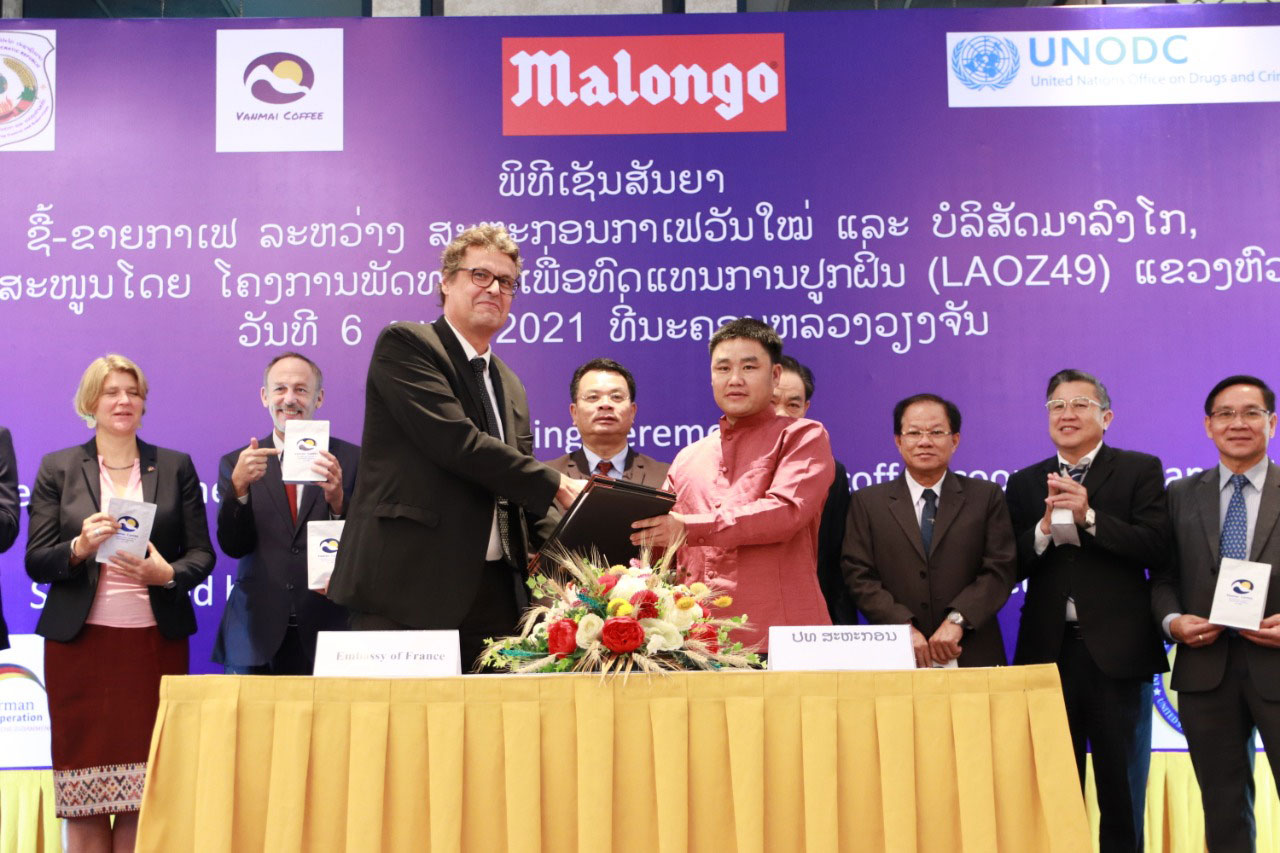 Savaythong Khounsavanh, President of Vanmai of the Cooperative, signed the five-year agreement on behalf of the members.

With the support of the United Nations Office on Drugs and Crime (UNODC) and the Lao Commission for Drug Control and Supervision (LCDC), the Vanmai farmers began their transition towards cultivating coffee in late 2016.

Since then, their achievements have been many. With the assistance of UNODC experts and agronomists, they have planted around 400 hectares of coffee and established their own cooperative to independently process and commercialize coffee for premium international markets.

Supported by UNODC’s Alternative Development project, wet processing centres have already been installed across 12 coffee growing communities. The construction of a warehouse, a dry mill and an office for the cooperative —boasting its own coffee shop— is scheduled to begin in 2021. 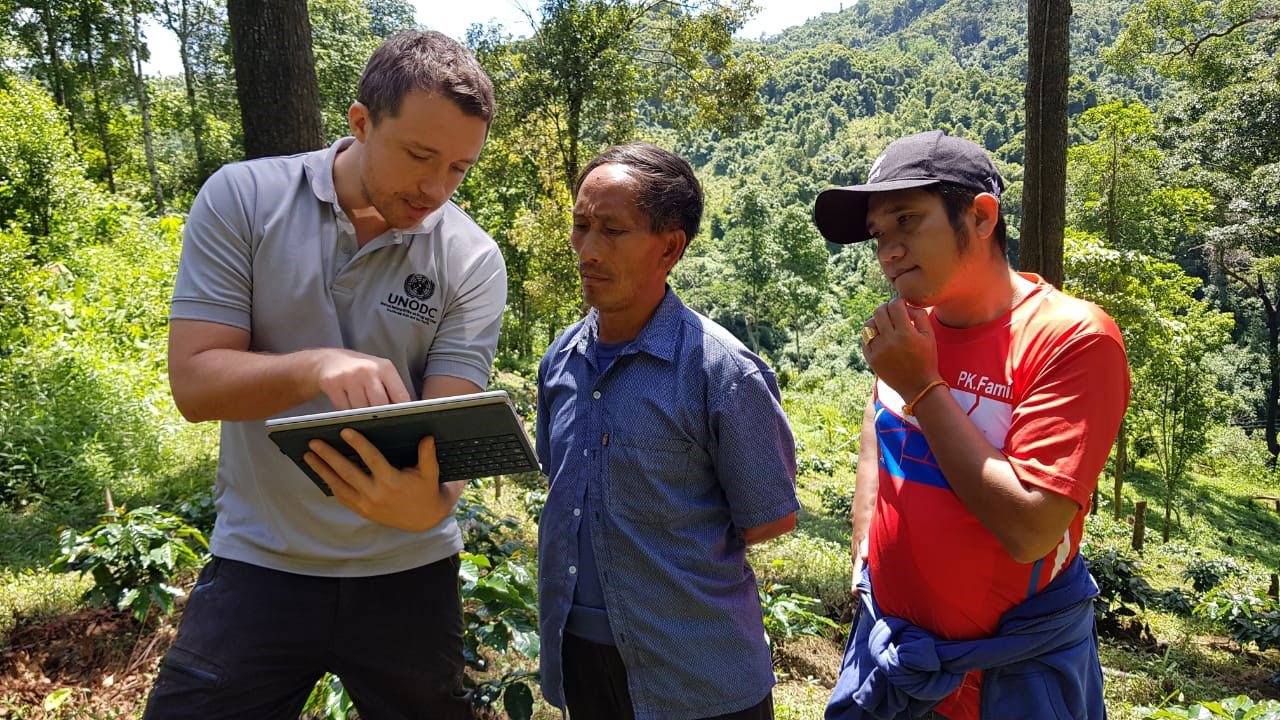 “Sustainable development takes time, but this project shows that hard work generates results,” explains UNODC’s Programme Manager Erlend Audunson Falch. “Our goal with the Vanmai Cooperative is to provide a real development model, also for other remote and opium growing communities in the country, based on empowerment through organization, controlling the value chain, and linking directly with markets without the use of middle men.”

The relationship with the French coffee roaster took flight in March 2020, when a Malongo representative was invited to the Vanmai coffee growing communities, meeting with the farmers and cooperative representatives and tasting the local Vanmai coffee.

Next, came the agreement. Malongo committed to buying the cooperative’s coffee beans over a five-year period in growing increments, starting with 20 tonnes in 2021 and increasing up to 200 tonnes by 2025. While the Vanmai cooperative committed to obtaining a fair-trade certification in time for their 2022 delivery and to launching a transition towards organic production and certification. 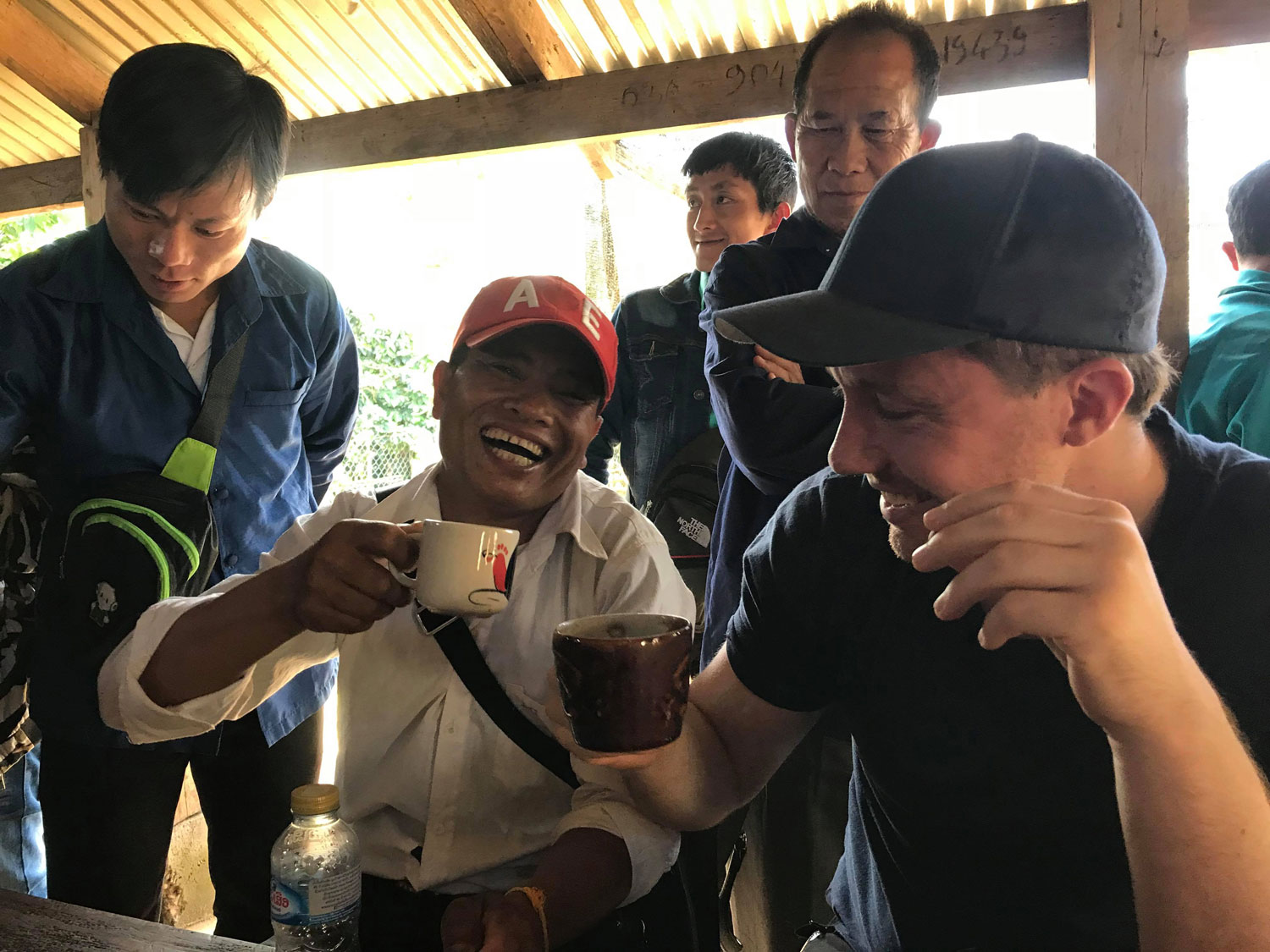 In 2020, the Vanmai farmers could taste their own coffee for the first time

“Vanmai is located in a new territory for us, and this territory makes their coffee different and will allow us to develop new and specific products and present a new face of Laos to our French consumers (...). I can assure you of Malongo’s commitment to this new programme,” offered Mr. Jean-Pierre Blanc, President of Malongo.

This UNODC-led project was recently extended to December 2023 based on available funding, with the aim to continue supporting local efforts until at least 2025. Over the coming project cycle, UNODC will continue to build up the management skills of the Vanmai cooperative, based on a solidly democratic foundation that also empowers women. The project also aims to double the cultivation area in the coming years, with the objective of assisting more beneficiaries in the communities who want to transition away from opium crops, while building a financially sustainable and resilient cooperative.