Enhancing awareness of the Nelson Mandela Rules through instructional placards 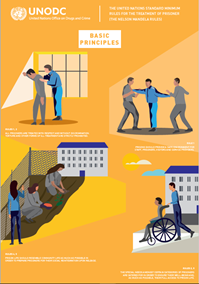 With the memory of Nelson Mandela in mind, who himself had to spend 27 years of his life in prison, the General Assembly adopted the revised United Nations Standard Minimum Rules for the Treatment of Prisoners in December 2015 as "the Nelson Mandela Rules". The rules resulted from five years of inter-governmental consultations and represent a landmark harmonization of the original version (1957) with international law and good prison management practices. The Rules provide a global and updated blueprint for prison management in the 21st century, and are ever more relevant in light of the challenges faced by prison administrations worldwide, including overcrowding, inadequate prison conditions, the risk of ill-treatment, abuse and violence, recidivism and the risk of radicalisation to violence in prisons.

To enhance awareness of the Nelson Mandela Rules and to make their message equally heard in prisons, UNODC has recently developed a series of instructional placards which focus on five key thematic areas (i) Basic principles; (ii) Searches; (iii) Access to legal aid; (iv) Restrictions and sanctions; and (v) Healthcare. The placards, which are available in Arabic, English, French, Russian and Spanish, illustrate and summarise the relevant rules in a very practice-oriented manner. Aside from general sensitization purposes, they are designed to be placed in relevant parts of prisons, such as admission areas, prison clinics and public spaces for the benefit of prison staff, prisoners and visitors.

The instructional placards on the Nelson Mandela Rules have been in high demand ever since their finalization. So far, copies have been sent to more than 30 Member States worldwide and dissemination efforts continue, including upon request from national authorities.

Take a look at the instructional placards yourself here!