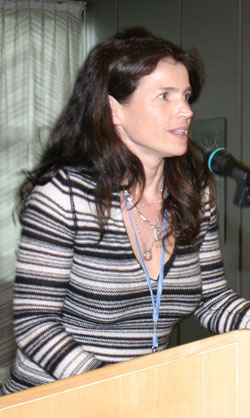 I'm often told by Americans how much they love my accent, to which my honest response is "what accent? I don't have an accent - you do."

One newspaper in the UK ran a competition to ask the public what it meant to be British.  I loved the response:

Being British is about driving a German car to an Irish Pub to have a Belgian Beer, then traveling home, grabbing an Indian curry or Turkish Kebab on the way, to sit on Swedish furniture and watch American shows on a Japanese TV. And the most British thing of all? Suspicion of anything foreign.

In Ghana, for example, what has supported the culture is a time-honoured tradition of apprenticeship for their youth: poor kids being sent away and given skills training by family or people living in the city. That is now sometimes abused by opportunistic traffickers who take advantage of abandoned mothers who never see their children again.

This has enormous impact on our perspective of slavery or even our denial of slavery.  Denial not because it is politically expedient, not because we don't want to end up poorly positioned on a list, but because we are unable to see it - it is part of our culture i.e. normal and so outside critique of it makes us defensive.  We have to accept that we are all part of this problem, and that this is everywhere.

People often ask me: Where is it worst in the world?  Well you can talk about the massive numbers of women fleeing the Eastern Block, duped into forced prostitution, but where are they going to?  They're coming to us, we're creating demand. So where is the problem worst? Is it here or there?  We have to find a way to be rigorously self-reflective and compassionate to each other's weaknesses. This is transnational crime and we can only fix it working transnationally.

This is clearly the dark side of globalization; the movement of people in modern times has thrown us all a new problem by exacerbating one of the oldest in the world.

Trafficking is the means by which somebody is put into slavery.  When we talk about drugs we talk about the drug problem - the problem is not in the movement.  So it is with the trafficking in human beings; and the issue of slavery.  I define that as the violent control of one person over another that keeps them in an exploitative circumstance against their will while given a basic subsistence.  I firmly believe that one of the solutions lies in us updating the protocol to give slavery the legal teeth that the UNODC worked so hard to bring to trafficking victims.  There are 17 million victims of slavery who need the UN's recognition, and some academics believe that figure to be 27 million.

I'd like to talk of some examples of slavery.  And I want to start close to home, actually the country where I live.

In the United States I spoke to Ernie Allen from the Centre of Missing and Exploited Children.  He told me that I between 100,000 to 300,000 children are potentially trafficked internally in the US every year; a large percentage -- he believes -- into child prostitution.

Is the UN the best vehicle to address it? Can the UNODC take this on on its own?

I have deliberately set out to gauge the level of violence in the context of slavery.  I've come to the conclusion that violence or threat of violence is a defining factor in Slavery.  I fear that one of the things that dilute our zeal to take on this issue is that by necessity the legal terminology of the definition is the lowest common denominator, the least requirement.  So we refer to it in the UN definition of trafficking as force, not violence but force.  Here are some examples of force.

You are forced when you are a camel jockey who is beaten and starved in order to keep your weight down, knowing that the older and bigger you get the more likely you are to be disposed of.

You are forced if you're trapped in a brothel to be raped sometimes 40 times a night having watched someone be thrown from a fourth floor window, or beaten to death,

You are forced if you're a mother put to work on a coca plot in Columbia supporting the 50 billion dollar cocaine industry for terrorists who shoot one of your kids in front of you and take the rest as child soldiers.

You are forced if you are a young boy in the carpet industry whose injured fingers are plunged into boiling water to sterilize and distract you from the pain, or you are tied and whipped when you try to escape.

You are forced if you're a 4 year old made to dive in the dark in Lake Volta in Ghana, battered over the head with an oar when you surface for breath and made to dive so deep that your nose bleeds constantly. There are young children who in some cases rather than be taken to a hospital when they become ill, have a weight tied to them and are tossed into the nets to be used as live bait.

And so often I hear of the guns, people held at gunpoint, shot at, have seen someone else shot at or killed -  doesn't matter if it's India and you're 9 months pregnant and quarrying in 115 degree heat, or a citrus picker in Florida, USA, you are held by a level of violence that to me if I hadn't heard it directly and consistently I don't know that I'd believe.

Threat of violence is also key. Children and adults are told that even if their trafficker/slave owner goes to prison they will have you and your family killed from their jail cell. These are usually well-connected people, often to the mafia. And how many of us in our heart of hearts would advise our own children to take them on?

I want to come back to cultural specificity.  I went to Cambodia and there I found violence that was unimaginable to me.  Culturally, they're struggling away from a very recent violent past. And we need to give them credit for that struggle: 40 years of bombing, the obliteration of 600,000 people by the US -- that's never even been acknowledged --, a despicable dictator put in place in Pol Pot who enacted atrocities and genocide on his people.

We know that an abuse victim is at risk of becoming the abuser, abuse becomes their coping mechanism for want of other means.  I'm not saying everyone in Cambodia is an abuser, I'm saying that the face of slavery there is distinguished by the level of torture, especially obvious when compared to neighboring Thailand.  We shouldn't be shaming Cambodia: we need to embrace her as an abuse victim.

So in that context there is a current phenomenon in Cambodia of the rape of ever younger girls, HIV/AIDS-free virgins, in the sex slave trade.  They used to be 16. Some still are, but now 16 isn't assurance enough, so the girls in the shelters have been getting progressively younger, and now there are more and more, as young as 4 or 5 years old.  They are sold for between 300 and a thousand dollars, they are raped over the course of a week, then returned to the pimp, who then takes them to a clinic who re-sews their hymen and sells them again while the wound is still fresh. This cycle is repeated time and time again.

One girl talked of being chained, a baton forced down her throat.  Many are electrocuted, others caged naked with insects that are put in their mouths and private parts.  They don't all survive.  Many victims don't survive.  They don't survive because as the population has exploded in direct correlation so the price of a human life has plummeted.

In the days of the transatlantic slave trade a young adult male agricultural worker would have cost you an equivalent of $40,000.  You can buy that young adult male today in the United States of America for $300.  These people, these slaves, are primarily invisible because of the illegal nature of their circumstance, and incredibly disposable should they get ill or become difficult.  Or even, to be honest, just not very productive.

So as depressing and awful as all of that sounds, are there solutions?

I am really happy to be able to say yes.

Remember the camel jockeys? There is now a robot that has replaced them.

Those kids fishing in Ghana? Close to 600 have been rescued and reintegrated to sustainable freedom.

Indian villagers making hand-made sand were approached by a little NGO called Sankalp who released one villager who went to legitimate work, used her pay to buy out another villager: the two went to work and saved to buy out a third. Then the whole village walked out. These are people whose entire villages have been enslaved for generations without even realizing it.  That village is shown to another village and they too walk out, and so on and so forth until they have released, in less than 5 years, 10,000 villagers, 90 of whom have run for local election and 70 of whom have gotten in!

So back to my question: Should the Internet be banned? No.  Is the UN the best vehicle to the solution? Not necessarily.  All of us have to get involved and look to our own area of expertise and try and see if we can meet this heinous abuse of humanity with our strength - what we know well.

Another example I love: The International Cocoa Initiative.

In the cocoa industry, Mr. Hershey had no children, so he left the entire Hershey's company to an orphanage.  It was only recently that they were approached by Kevin Bales, from Free the Slaves who told them that the profit that supported the orphans was coming from child slavery in Ghana and the Ivory Coast on the cocoa plantations.  The cocoa industry, wanting nothing to do with this, has united against this system and committed to eradicate it through educational programs on the ground and local culturally sensitive initiatives.  We should thank them because without them our untarnished-by-child-slavery chocolate allowance for the year would be one Hershey's kiss.

And last but not least the United Nations Office on Drugs and Crime, Mr. Costa, and all the Member States have done phenomenal work with the Convention against Transnational Organised Crime, and coming up with a definition of Trafficking in persons that has provided the international community with a phenomenal framework and reference. You are advocating for the holistic approach of the "three Ps":  prevention, prosecution, and protection… and have allowed me to add my own "P": prioritize. I commend you in your work, it is such an honour to have been chosen to work with you and I am deeply proud to be your Goodwill Ambassador. (I hope you will put up with me a little longer.)

I am always inspired and moved by the extraordinary resilience of victims, and their ability to transcend their circumstance.  I watch these young girls in the safety of the shelters sing and dance, I'm on a learning curve, but I know that many of you who've worked on this for years have had this experience and it's heart-breaking, because it is still unimaginable that after what they've been through they can find the resource to do it so playfully, lightly and joyfully.

I promise those young girls from those brothels that we don't just arm them with sewing skills and send them on home to the parents who sold them in the first place or beat them, caged them, chained them and rammed batons down their throats.  I promise them that there are people around the world taking this very seriously and working very hard on stopping it.

Please help me keep that promise.