June 19-20 - CRIMJUST held its second annual meeting in Cartagena, Colombia, with some 43 participants. Present were members from participating countries as well as representatives of CRIMJUST's partner, Transparency International, and its donor, the European Union. The meeting highlighted organized crime and drug trafficking regional trends as well took stock of CRIMJUST's advancements and outlined its future strategy. CRIMJUST Coordinator, Glen Prichard, kicked off the meeting by reaffirming the UNODC's commitment to strengthening judicial capacities and cooperation at regional and inter-regional levels to curb cocaine trafficking. Participants were then divided into various working discussion groups in order to share their experiences on the field as well as discuss new areas of opportunity and ways to adapt shared goals into contextualized concrete actions.

During the opening remarks, Olivier L 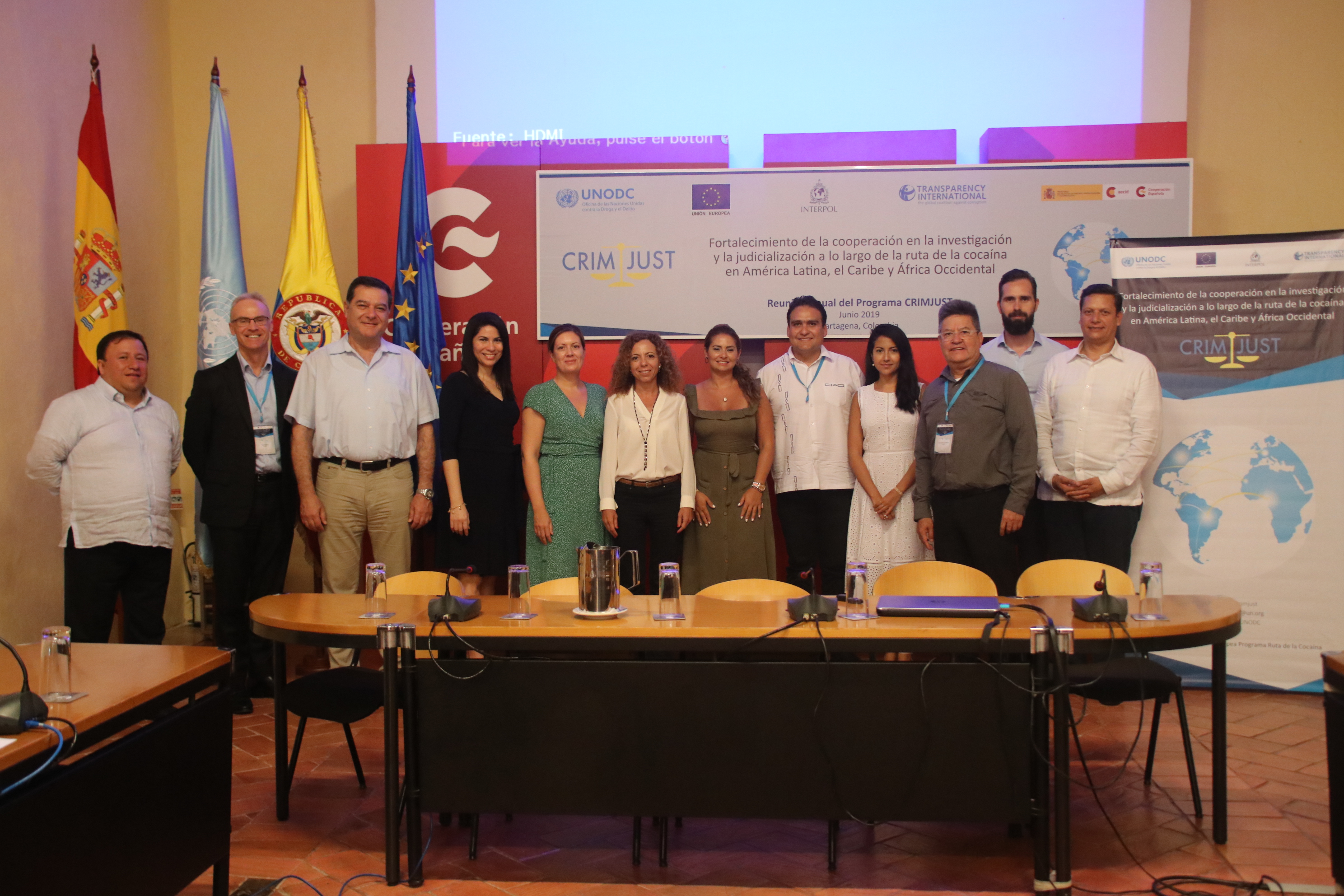 uyckx, Head of Unit for the European Union, called attention to the changing nature of drug production and trafficking networks as a result of globalization and the increasing professionalization of criminal groups. Likewise, General Jorge Luis Ramirez, from the Colombian Anti-Narcotics Directorate of the National Police, highlighted the increasing complexity of countering drug trafficking, largely due to the diversification of routes, actors and methods involved along with the development of new modus operandi. "Organized criminal groups' flexibility and ability to innovate", he argued, "have facilitated the increase of drug trafficking worldwide".

During the meeting, Chloe Carpentier provided attendees with an overview of the main trends regarding transnational organized crime and cocaine trafficking, namely highlighted the plurality of production methods, modus operandi, business models, smuggling routes and technologies involved. These findings were echoed by  her counterpart, Diego Quintero, who pointed to the shift of pyramid-like models of criminal organizations to complex and interdependent networks structures, which draw upon local vulnerabilities to outsource and expand their activities.

In the face of increasingly multifaceted and accelerated drug production and trafficking networks, the UNODC has multiplied its efforts to bolster expertise on illicit trafficking. During the Annual Meeting, the UNODC underscored the value in sharing knowledge to affected populations. It exposed the results of the implementation of its project, Education for Justice Programme, in Argentina, which offers a series of online learning modules on organized crime as well as showcased CRIMJUST technical workshops, which train law enforcement officials in the various stages of drug production and means to identify and dismantle clandestine cocaine laboratories.

The Annual Meeting also offered an opportunity for the CRIMJUST team to present the outcomes and proposed activities under CRIMJUST II, which will launch a new research project to better inform judicial institutions' initiatives, target disman 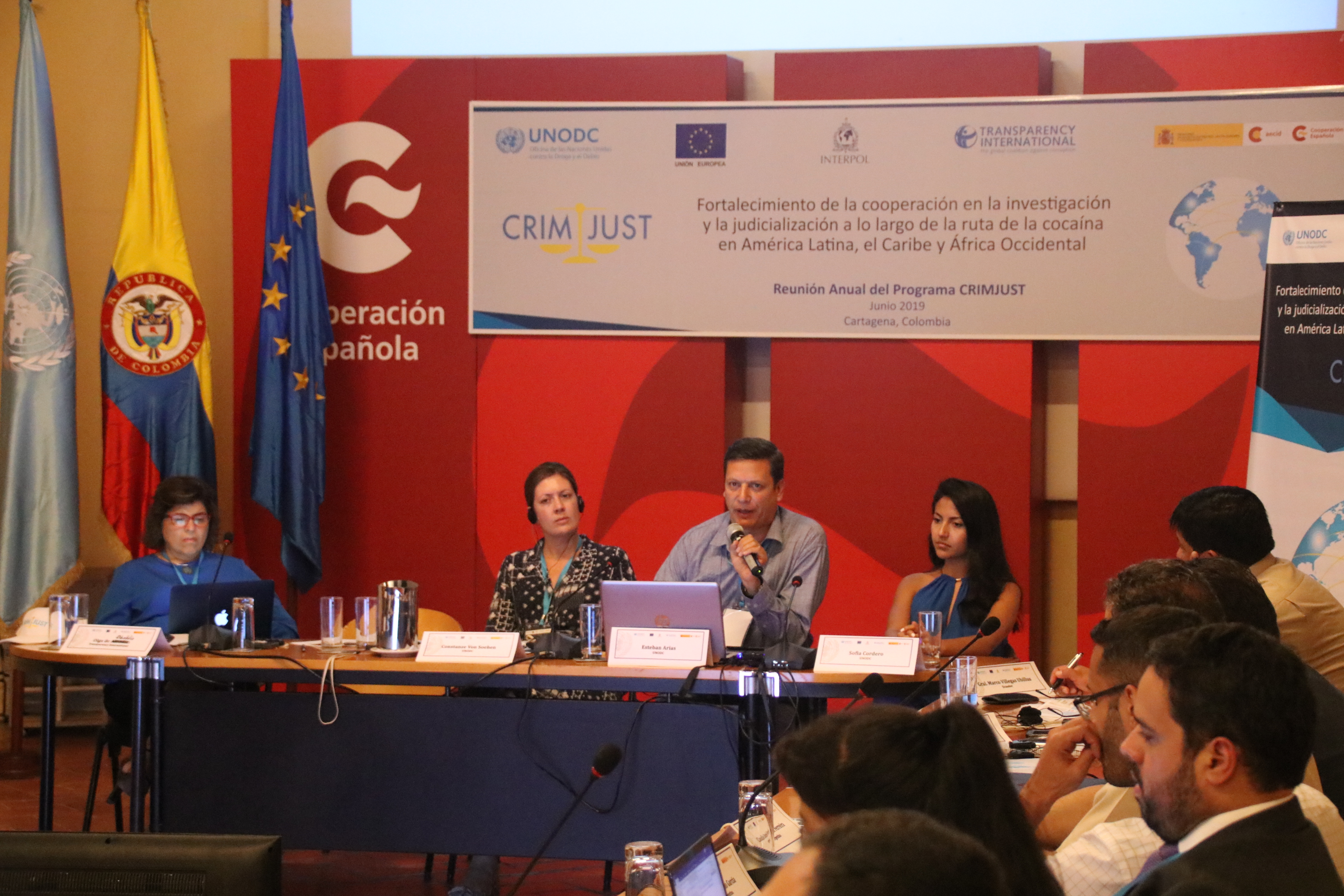 CRIMJUST continues to honor its commitment to the Sustainable Development Goal 16 "Peace, Justice and Strong Institutions" by providing training and tools to support its participants in their efforts to dismantle underground economies.