The United Nations Office on Drugs and Crime (UNODC) inaugurated in Bolivia a specialized workshop aimed at supporting and enhancing the implementation of property confiscation on assets seized from illegal drug trafficking.

At the inaugural event, Carlos Romero, Minister of Interior, thanked the European Union, the UNODC, and the government of Colombia for their support in strengthening his country's capabilities in the implementation of these procedures. Furthermore, he called for the modernization of the Directorate for the Registry, Control and Administration of Seized Assets (DIRCABI) and of the Financial Investigations Unit (UIF); as well as for the cooperation in combating illicit drug dealing. He also called for further technical cooperation from the UNODC, in order to bolster effective regional cooperation, and implement procedures to reward informants.

Meritxell Giménez, representative of the EU in Bolivia, stated that the resources linked to illicit drug trafficking undermine local economies and businesses, and ultimately threaten society on a myriad levels. She also acknowledged that it is the governments' responsibility to identify where those resources come from and where are they located.

Thierry Rostan, UNODC representative in Bolivia, detailed that this workshop is provided in the context of the CRIMJUST Programme and reflects the larger support to the implementation of the Strategic Plan for Combating Illicit Drug Trafficking and Reducing Surplus Coca Crops of the Plurinational State of Bolivia, both financed by the European Union. 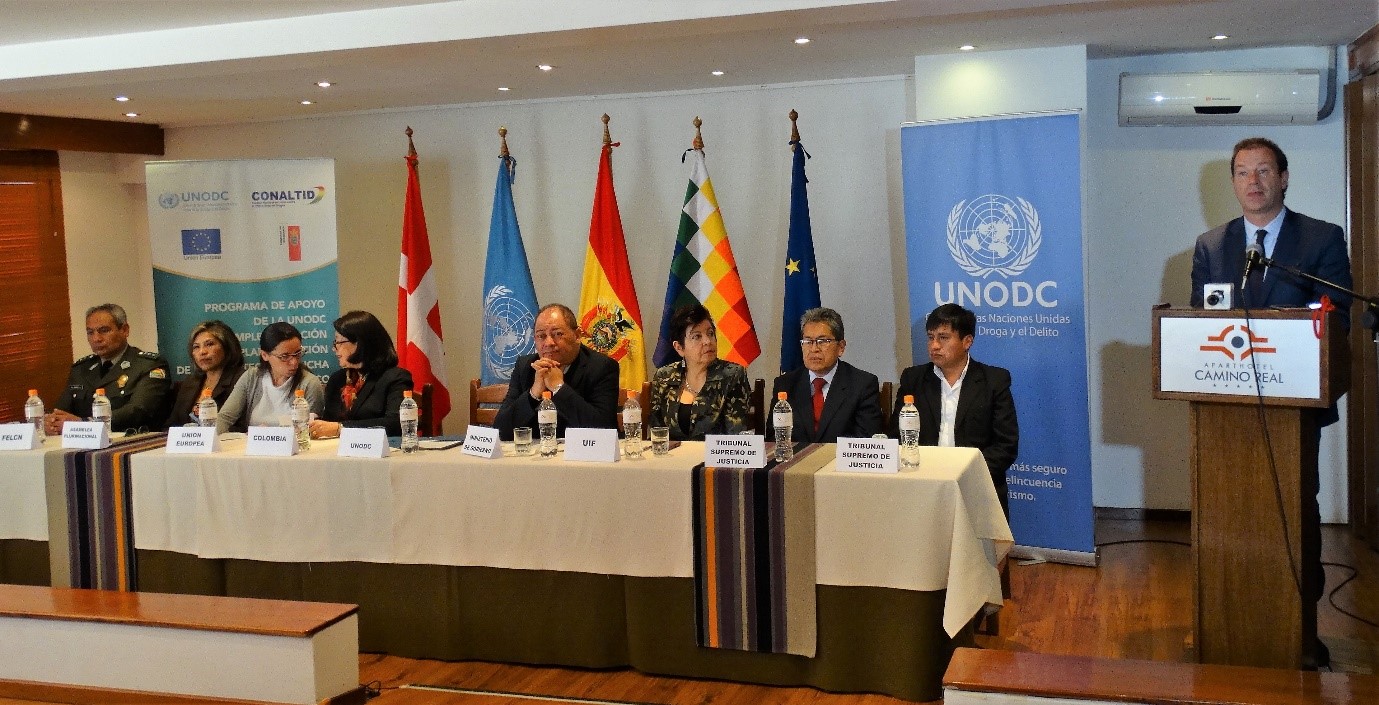 The workshop is provided by Colombian experts Judge Freddy Joya Arguello, who specializes in property confiscation; and by Guillermo Herrera, a criminal investigator who specializes in money laundering, property confiscation, and financial crimes. Their participation was in collaboration with Andrea Agudelo, from UNODC Colombia; and  Diego Ricardo Quintero, CRIMJUST Regional Coordinator.

Through this workshop, participants will analyse the international instruments that make reference to confiscation of property, in particular the UN Conventions against Illicit Traffic in Narcotic Drugs and Psychotropic Substances; against Transnational Organized Crime; against Corruption; and the Convention for the Suppression of Financing Terrorism. Additionally, they will examine the international standards set by the Financial Action Task Force (FATF) and by the UNODC Model Law on In Rem Forfeiture. This workshop will also contain a module on Bolivia's Law for Combatting Illicit Trafficking of Controlled Substances and its guidelines.

Regarding the implementation of property confiscation, Colombian experts will also touch on its implications and its main causative factors. The workshop will also address financial and property-related investigation, precautionary measures, legal arguments, supporting evidence, and the trial itself.

The workshop involves the participation of officials from the Minister of Interior, the Judiciary Power, the Attorney General's Office, Deputy Minister of Social Defence and Controlled Substances, the Directorate for the Registry, Control and Administration of Seized Assets (DIRCABI), the Anti-Narcotics Special Task Force, INTERPOL, the Financial Investigations Unit (UIF), and police attachés from Colombia, Peru and Brazil.