"I am living my rights" 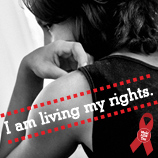 1 December 2009 - Since the beginning of the AIDS pandemic, approximately 60 million people have been infected with HIV and more than 20 million have died. UNAIDS estimates for 2008, released last week, indicate that there are 33.4 million people worldwide living with HIV, 15.7 million of them women and 2.1 million of them children under 15 years of age.

The theme of this year's World AIDS Day, marked today, is "Universal access and human rights". People who are infected, or are vulnerable to infection, have the right to health care, the right to a life free from stigma and discrimination.

UNODC helps people live their rights, particularly those who are marginalized and at risk like drug users, victims of human trafficking and prisoners. This is part of UNODC's wider comprehensive assistance to Member States, which includes treatment of drug dependence, prevention of drug use, improving criminal justice systems with a humane approach in prisons, and protecting the health of people vulnerable to human trafficking.

"While progress has been made in some parts of the world in providing universal access to prevention and treatment, new evidence shows new epidemics among drug users, particularly in Africa", said UNODC Executive Director Antonio Maria Costa in his special message for the day.

UNODC, together with other members of the UNAIDS family, is therefore redoubling its efforts to achieve universal access to HIV prevention and treatment through a new initiative called the UNAIDS Outcome Framework (2009-2011). It calls for joint action to reach the most vulnerable, and bold new measures to break through social, political and structural constraints that are limiting the effective prevention and treatment of HIV.

"The bottom line is to avert HIV infections and related deaths, to improve the quality of life of people living with HIV, and to contribute to the attainment of the Millennium Development Goal to halt and reverse the AIDS epidemic", added Mr. Costa.

Therefore, on World AIDS Day 2009, UNODC stresses that everyone - including those on the margins of society who are most at risk - should be able to live their rights.