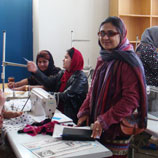 6 August 2009 - Many women in Afghanistan are routinely imprisoned for violating social, behavioural and religious norms. Some find it difficult to return to their homes after serving time in prison and some are rejected due to the "shame" brought to their families as a result.

Freshta Jamal, a UNODC staff member, assists Afghan women who are former prisoners to re‎integrate into society. ‎Freshta was a student when the Taliban closed her university in 1992. She fled to Pakistan, ‎where she earned a medical degree. After her return to Afghanistan, she engaged in the ‎reconstruction of her home country. She has worked for several medical and humanitarian aid agencies, always with the aim of supporting vulnerable women and girls.

Now, Freshta helps women and girl ‎prisoners in Afghanistan by equipping them with the skills they need to start a new life. ‎Her responsibilities include coordinating educational and vocational ‎training for prisoners and psychosocial counsel training for prison staff. ‎

Freshta Jamal offers insight into the work she does to help women resettle into their communities.

What are some of the social, behavioural and religious problems that  women in Afghanistan face?

Women in Afghanistan face family violence and family conflict, sexual abuse, reproductive health problems and economic hardships, which sometimes lead to the women deserting their own homes. Polygamy is allowed in the society, and many women experience sexual and physical abuse. Also, it is illegal for women to establish relations with another man; if they do and get caught, they face detention.

Many women are not aware of their rights and cannot speak up for themselves. As a result, a lot of them find themselves detained when their husband accuses them of desertion, for instance, because their husband's word carries more weight. In some instances, you will find that women are being used to carry drugs from one place to the next, but they do not get paid despite risking their lives.

What do you do to help women who are unable to return to their homes?

We are planning to establish a transitional house where women who have been released can attend vocational training programmes for income generation to make the reintegration easy. Working closely with the Government and NGOs, we provide information about the situation of women in the shelters and keep statistics on former prisoners in the shelters for monitoring purposes.

The Government of Afghanistan is one of the big supporters of changing the status of women in prisons and it is putting up training facilities for women in close coordination with penitentiary staff and the female prisoners themselves. UNODC provides training programmes in criminal justice to build the capacity of staff in the justice system. It is also helping the Government to develop a psychosocial training curriculum for use by social workers and penitentiary staff to help the prisoners.