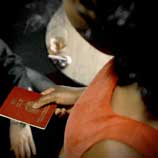 6 July 2009 - It is estimated that 2.4 million people throughout the world are lured into forced labour as a result of human trafficking. Women and girls account for some 80 per cent of trafficking victims, while children account for 15-20 per cent.

In an effort to assist member States in combating human trafficking, UNODC has developed a model law - a generic law to guide member States in preparing their respective national laws - against trafficking in persons. It has been designed to be adaptable to the needs of each State, whatever the legal traditions and social, economic, cultural and geographical conditions of that State.

The Model Law covers not only the criminalization of trafficking in persons and related offences, but also the different aspects of assistance to victims and the establishment of cooperation among different State authorities and non-governmental organizations. Each provision is accompanied by a detailed commentary, providing several options for legislators, and also legal sources and examples.

UNODC offers practical help to States, not only in helping them to draft laws and create comprehensive national anti-trafficking strategies but also in assisting with the resources needed to implement them. States receive specialized assistance, including the development of local capacity and expertise, and practical tools to encourage cross-border cooperation in investigations and prosecutions.

The Protocol to Prevent, Suppress and Punish Trafficking In Persons, Especially Women and Children, adopted by the United Nations General Assembly in 2000, represented a significant milestone in international efforts to stop trafficking in persons. As the custodian of the Protocol, UNODC addresses human trafficking issues through its Global Programme against Trafficking in Human Beings. To date, more than 110 States have signed and ratified the Protocol.

The Model Law assists States in implementing the provisions contained in the Trafficking in Persons Protocol. It will facilitate the review and amendment of existing legislation and the adoption of new legislation.