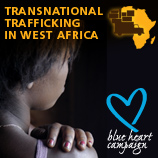 21 July 2009 - Thousands of women are continually trafficked from West Africa to Europe in a multi-million dollar criminal industry.

The women come from Nigeria and to a lesser extent Sierra Leone, Ghana, Cameroon and Guinea. They are usually taken to Italy, as well as the Netherlands, Spain, Belgium and other countries. With an estimated value of between $152 million and $228 million annually, the market sees a yearly inflow of between 3800 and 5700 women. It is estimated that West African trafficking victims comprise about 10 per cent of the forced sexual labour pool in Western Europe.

Research shows that known traffickers themselves are Nigerian (mainly from the federal state of Edo) who reside both Nigeria and in destination countries. In both Europe and Africa, detected traffickers are more likely to be women (referred to as madams) than men. Men are often involved in supervising the travel, but, increasingly, they are also exploiters or recruiters. The growing involvement of men appears to be associated with growing levels of violence in the business.

The modern European market for trafficked women from West Africa began in Italy in the 1980s and in the Netherlands in the early 1990s. Women of the Edo ethnic group from Benin city in Nigeria (colloquially known as "Binis") began to migrate to Europe in search of work, and found a market for sexual services. They began to recruit other women from their region, fronting the money for travel and creating a system of debt bondage that evolved into human trafficking.

In the debt bondage system, the recruiter provides a loan of perhaps $40,000 to $55,000 to the victim to cover the costs of the illegal immigration, and creates a contract to repay in a specified period of time. Victims rarely understand the nature and conditions of work awaiting them, and some may even be deceived about the final destination. The victims are then forced into prostitution until the debt is repaid. Thus, the trafficked women are not generally victims of kidnapping; they are indebted labourers.

Ethnic networks are frequently used as a basis for organised crime, and they are particularly relevant in this business, where issues of trust and coercion are key. Several studies on trafficking in West Africa emphasise the use of traditional religious rituals and charms to secure and maintain the submission of the victims. Evidence of this practice has been found in Italy, the Netherlands, Norway and the United Kingdom.

The means of entering Europe vary over time and are dependent on the destination. To access the United Kingdom, for example, girls and young women (ranging in age from 10 to 20) are often flown in and instructed by the traffickers to seek asylum upon arrival. Once placed in juvenile homes, they disappear, to be found working in the red light districts. Some victims are diverted to transit points, and suffer sexual exploitation en route to their final destination.

Rotation is a common practice where victims are moved between cities as a means of disorientation. In Switzerland, the federal police have noted that Cameroonian victims are often moved back and forth across the Swiss-French border.

The human rights of trafficked persons and their rights of victims of crime are both key components of the rule of law, and they are directly implicated in the trafficking of women and girls for sexual exploitation.