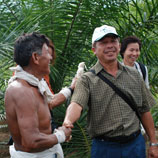 31 July 2009 - Recently, in a valley in Peru that used to be a patchwork collection of coca farms engulfed in a fog of fear from drug cartels, former opium poppy farmers from Asia met with local former coca bush farmers to share experiences, lessons learned and techniques that have proven most effective in reducing the production of illegal drug crops while securing a stable and fair livelihood for farmers.

UNODC, together with staff from its country offices in Peru and the Lao People's Democratic Republic and the Government of Peru, organized an eight-day seminar and field study visit to Lima and various locations of the Upper Huallaga Valley in Peru for Government personnel, technical field staff and farmers from South-East Asia (China, Lao People's Democratic Republic, Myanmar and Thailand) and their counterparts in South America (Colombia, Ecuador and Peru).

The study tour included visits to palm (for oil), coffee, cacao and heart of palm plantations, nurseries and processing stations, as well as visits to coca bush fields to see, first hand, the devastating impact that coca bush cultivation has on the environment, particularly on the soil, fauna and forests. At each stop, farmers from the area explained the cooperative process they use to produce, market and sell their products nationally and internationally at competitive prices, highlighting the important steps taken to move up the marketing chain resulting in direct exports and eliminating the middlemen who had previously reaped a majority of the profits.

At the seminar, participants learned about the different development-oriented drug control approaches used by national Governments to address illicit crop cultivation. "Although Peru is still the second largest coca producer in the world, major success has been achieved through the joint work of UNODC, bilateral donors, national authorities and farmer communities to implement alternative development initiatives", said Jorge Rios, Chief of the Sustainable Livelihoods Unit at UNODC.

The area of coca bush cultivated in Peru decreased from 128,100 ha in the mid 1990s to 56,100 ha in 2008. Approximately 20,000 Peruvian farmers now earn a living from 13 agro-industrial commercial enterprises that have been set up with the support of UNODC to help farmers find sources of income other than cultivating coca bush.

"There are many lessons to be learned from the 25-year history of alternative development and it is important to ensure that countries are aware of what has worked, not worked and how obstacles have been overcome. Although models, for the most part, are not able to be replicated in their entirety, countries that have the problem of illicit crop cultivation often face the same challenges and can learn from each other", added Mr. Rios.

UNODC assists in cultivating, processing and marketing legal agricultural products and in generating income through activities that are in line with market demand, as well as the farmers' skills, interests and traditions. UNODC is currently carrying out alternative development interventions in Afghanistan, the Plurinational State of Bolivia, Colombia, the Lao People's Democratic Republic, Myanmar and Peru. In order to ensure that projects are properly localized, UNODC supports Governments to develop community-based approaches in project planning, implementation and evaluation, as well as in natural resources management.

As a follow-up to the exchange visit in Peru, which was co-funded by the German Federal Ministry for Economic Cooperation and Development, UNODC is exploring the possibility of organizing farmer and technical field staff exchanges on specific issues such as the creation of small farmer cooperatives and enterprises, the production and use of organic fertilizers and value-added marketing and research. It is hoped that this more technical exchange programme will result in increased agricultural output, better local economies and environemnt, as well as reduced illicit crop cultivation.

Video: From coca to palm oil: alternative development in Peru