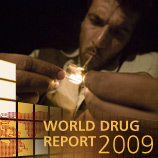 22 June 2009 - Many drug dealers, motivated by higher profits, use chemicals to "cut" illicit drugs in order to increase the quantities they can sell to consumers. Some of the chemicals alter the effects of the drugs.

In 2008, the laboratory of the Counter-Narcotics Police of Afghanistan (CNPA), through improved forensic capacities and facilities, was able to identify several pharmacological substances that are typically used for mixing with heroin. These chemicals, usually referred to as cutting agents, include caffeine, chloroquine, phenolphthalein and paracetamol.

Greater understanding of these substances also serves as a reminder that there is a market linked to the illicit drug industry that is frequently overlooked, namely that in cutting agents. This market is lucrative because cutting agents are legal and their trade carries low risk. Increased awareness of their trade could help to enhance drug law enforcement legislation. The CNPA has presented the findings of its analysis of the effects of cutting agents in the World Drug Report 2009.

Caffeine, for example, causes heroin to vaporize at a lower temperature, which may be seen by heroin users who smoke or inhale heroin as a practical benefit of mixing the two substances.

Chloroquine, a well-known antimalarial drug, has been used as a cutting agent for heroin for many years, although it was not previously known to be used in Afghanistan. Chloroquine does not alter the effects of heroin or influence the way in which it is consumed. Its widespread availability, low price, colour and crystalline structure are thought to be some of the reasons for its use. Given chloroquine's close resemblance in appearance and consistency to what is known in South-West Asia as "crystal heroin", it is possible that chloroquine has been marketed on its own, as fake heroin.

Phenolphthalein is used as an acid or base indicator. It has also been used as a laxative for more than a century, but has now been removed from the market because of concerns over its carcinogenicity, i.e., its potential to cause or increase the risk of cancer by altering cellular metabolism. While it has been reported as a cutting agent for heroin in the past, the reasons for its use are not well understood.

Paracetamol is a popular over-the-counter painkiller. It is easy to purchase and relatively cheap. Its mild analgesic properties and bitter taste may disguise heroin of poor quality. The use of paracetamol as a cutting agent for heroin is well documented in many countries and regions.

The reason for adding specific, pharmacologically active substances (so-called adulterants) to heroin remains an area of speculation that can be only partly explained by the pharmacological properties of the substances concerned. However, the findings of the CNPA laboratory suggest that heroin cutting takes place at source and that heroin produced in Afghanistan may be customized for different markets and consumer groups.